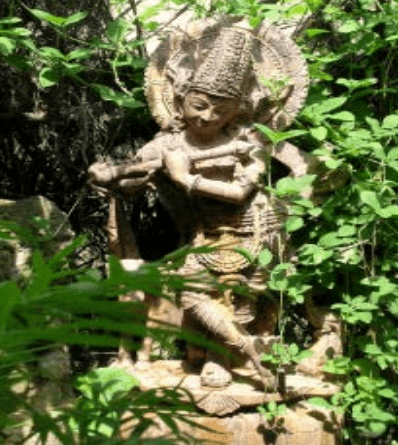 Stone carving is a major craft of Orissa. As is evident from the innumerable archeological monuments, rock-cut sculptures, caves and temples built for centuries with the most beautiful carved statues and other adornments, the art of carving in stone has reached dizzy heights of excellence perfected over the centuries in Orissa. The artisans who built the magnificent temples of Puri and other wonders in stone, like the temple chariot of the Sun God at Konark and the beautiful stupas, have kept alive the sculptural traditions of their forefathers and their deft hands can chisel and carve exact replicas of the original temple sculptures besides producing a variety of other items.

Producer Communities
Sahoo, Mahapatra and Maharana are the other castes existing in the soapstone cluster in Konark, Puri. They all work under one organization. They are all carvers by profession.

Craft Tradition
Faith, Indians have traditionally believed, can breathe life into a stone. That’s precisely what the sculptors of the country have been doing for centuries by making exquisite stone icons and then setting them up in temples as ‘Almighty Gods’. The carving is helped materially by the flawless craftsmanship which makes these idols seem so divine that you can’t help but bow your head to them.

India produces an exquisite range of artistic and decorative stone crafts. The craft started way back in the 12th century under the direct patronage of the Mughal emperors. The skilled workers came from the Middle East. But after the Mughal dynasty the workers fell into deep trouble as their products had got no takers. Their occupation was on the verge of extinction. They switched over to other trade and started moving to other places from their native land. One section in northern India started doing ivory work. But this became a banned item for export. Once again they tried to revive their age-old art. But the story is no different. Poor Indian people do not have the buying power to purchase these works of art. Then came some exporters to their rescue. The carved stone items immediately got overseas buyers’ favor. The industry started developing from stone carvings for temple sand mosques to utility items like candle stands, incense stick holders, jewelry boxes, etc. The next generation of craftsmen started creating ornaments, beads, etc.

Raw Material
Soapstone
Mainly soapstone or ‘khadipathara’ is used as a raw material here. Soapstone is available in Rajasthan, Madhya Pradesh, Orissa, TamilNadu, Karnataka and Bihar.The original white sandstone was found in Banki, a town in the Khurda district, Orissa. But due to its limited availability, craftsmen started using other varieties of soaps tone from different parts of Orissa. This quality of stone is not as soft and lustrous. These are available in different colors like green and pink and are little harder than the original soapstone.

The craftsmen handle with equal facility the ultra-soft white soapstone or khadipathara, the slightly harder greenish chlorite or Kochilpathara, the still harder pinkish Khandolite or Sahanapathara or Baulapathara and the hardest of all–black granite or Mugunipathara. At present they are getting soapstone from the Morwansh district which is 350 kilometers from Puri.

They purchase 8-10 tons of soapstone per ton at a time, which they find sufficient for 1 or 2 years. For their urgent needs they depend on the local dealer in Konark.

Araldite
Araldite is used to stick the broken pieces together. It is available in the market and is mixed with lamp soot for use.

Wax Polish and Varnish
These are used for shining the finally carved pieces.

Tools
The tools that they use are few and simple.

Saw
This is used for cutting the stone slabs into the required sizes. 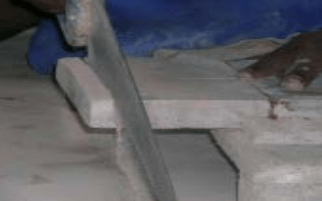 Planer
This is used for smoothening the rough edges (if required). 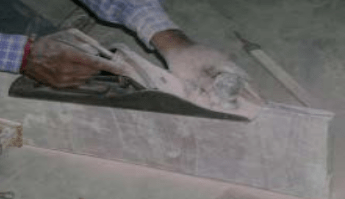 Two kinds of chisel are used: 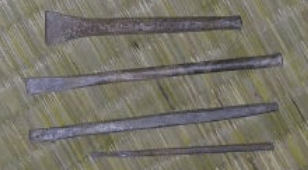 This iron tool is sharp and flat-edged, used initially for removing unwanted material to get a rough outline on the stone.

Gunati
It is a two-sided iron chisel which is used for minute or detailed work. Usually, ornamentation, face, eyes and other minute details are carved out with different sized gunatis. 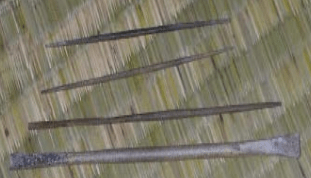 Hammer
The hammer used is made out of wood for soft strokes, as the stone is soft. It is used to hit over the chisel for carving.

Sand Paper
Sand paper is used for smoothening the rough surface so as to give the final touches.

Brush
Used for cleaning the stone powder which collects on the outer surface of the statue while carving out details.

Pipe
This is a hollow pipe which can be wooden or made up of metal. This pipe is used to blow away the stone dust from the statue. It is used for those parts where the brush cannot reach or when dust collects on the inner parts of the statue.

Pencil
HB pencils are used here to sketch rough outlines on the stone before the chiseling starts. 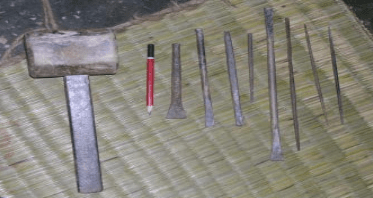 Process
•Process of making soapstone sculptures or products start with cutting a piece of soapstone in the required shape and size with the help of a saw. 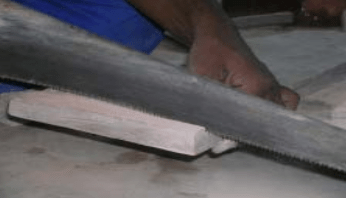 Sometimes the slab of stone is planed from the sides; this depends on the use of the stone slabs.

•The sides are checked for being planned properly by putting a previously planned stone over the current one. 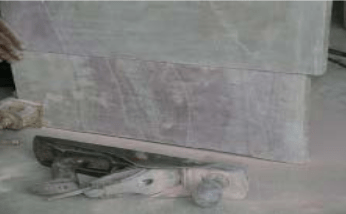 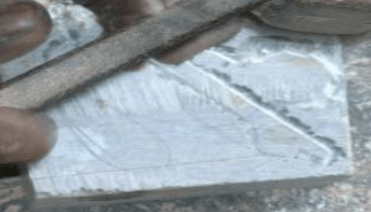 •Whether the stone is hard or soft, a sort of outline is first drawn on it after it has been cut to the appropriate size. 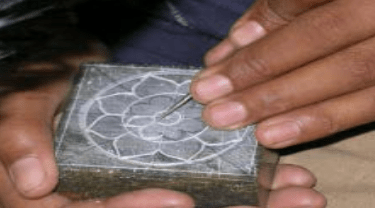 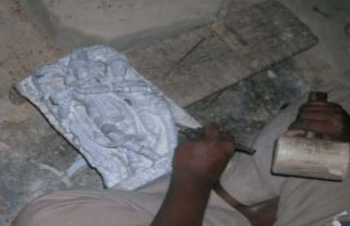 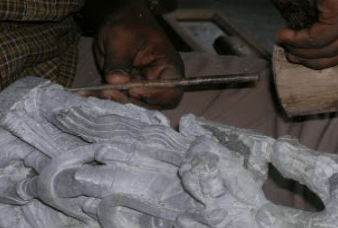 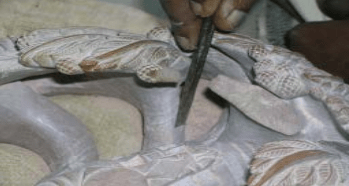 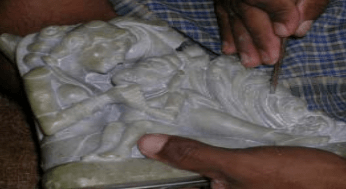 •While scraping, the dust collected on the object has to be cleaned. The same is done with the help of a reasonably thick brush. A blow pipe is used for cleaning where the brush cannot reach, through which air is blown to clean the dust.

•Carving is started by giving shape to the body and then others parts like face, fingers, nails and other minute details are carved out after completing the whole sculpture. In the end, the polishing is done depending on the nature of the product required.

•If some piece of stone breaks while carving it is stuck with araldite. 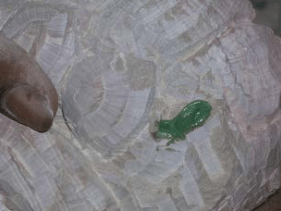 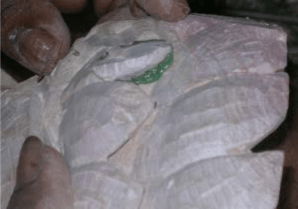 •The process can be summed up as seeing a piece of stone transform into a carved statue. 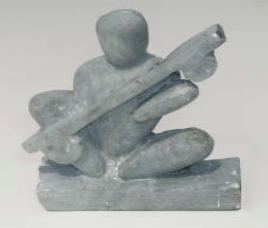 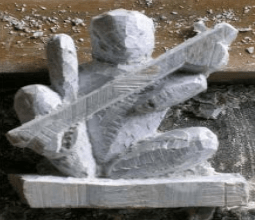 Products and Their Uses

There are some pieces which are carved out of a single stone, like the one on the left column which represents the summary of the Ramayana and is enclosed in a shell.

These are products which are different from the traditional designs of gods and goddesses. These are tribal designs made of stone other than soapstone.