The Chenchus of Telangana

Home The Chenchus of Telangana 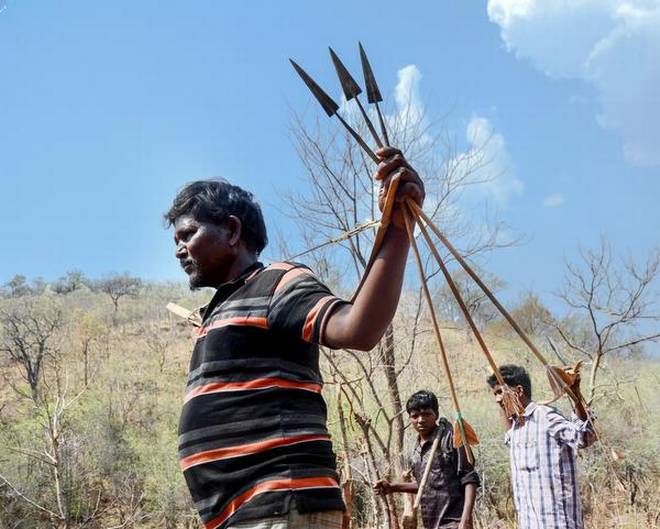 It an aboriginal belief of the peoples of the Chenchu tribe of Telangana and Andhra Pradesh that they are descendants from the union of ‘Chenchu Laxmi’, a girl who was living under a ‘Chettu’ tree and Lord Malikarjuna.  The origin of the Chenchus is connected with Lord Malikarjuna of the Srisailam temple and have mentioned in their religious texts and temple records. Thus, they are associated with the temple in the heart of the Andhra region where they enjoy special privileges. Their sparse population (25,000 approx.) is situated in the Nallamalai forests of Andhra Pradesh in India spread over the districts of Mahaboobnagar, Kurnool, Prakasam and Guntur.

The Chenchu are a numerically small, Proto Australoid, food gathering tribe who speak a dialect of the Dravidian languages termed Chenchu. Their language is also known as Chenchucoolam, Chenchwar, Chenswar or Choncharu. Many of them also speak Telegu. Being major of Hindu belief, they worship the numerous gods and goddesses along with a few others namely- Bhawan Taru-the watcher of Chenchu and Garelamai Sama, the goddess of the forest. They depend on the forest for their daily requirements of gathering food and produce for their daily lives. 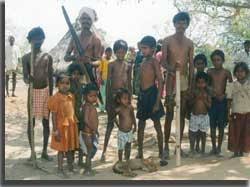 Being largely endogamous, they do not tend to marry out of specific rungs of their community dictated by the ancient Hindu system of lineage and descent called – ‘gotras’. The Chenchu identify themselves with membership with these specific gotras and have clan names. The patriarchal system dictates that the name of the bride after the marriage ceremony ‘Pelli ’which would be changed to her husbands’ and would be ‘given away’ by her maternal uncle.

Unfortunately, the tribe faces numerous problems in various sphere of life. Between the years of 1990 and 2006, the tribe was caught in the crossfire between the Maoists and the anti-Naxal police force called the Greyhounds. Forest department and wildlife conservationists of the Nagarjunasagar Srisailam Tiger Reserve (NSTR) stick to the argument that fast depleting species of tigers require an exclusive protection zone, making the residence of the Chenchu tribe suddenly unsure. Studies have documented a high prevalence of undernutrition, morbidity and mortality among Chenchu, with lower than average BMIs and numerous nutrient deficits. Women and children being the most affected having low nutrient consumption, premature delivery, low birth weight, alcoholic cirrhosis of the liver, accidents, snakebite and pulmonary tuberculosis also because of low access to health and hygiene facilities that come with high illiteracy rates and poverty. Raging alcoholism is also a huge problem for the community by ways of making liquor with indigenous ‘mahua’ flowers and access to cheap tobacco. 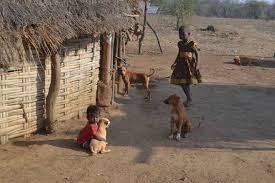 With plans for rehabilitation and integration of the Chenchu tribe, the government claims to try and help the community. A community, however, which has no longing to leave the land of their ancestors. A community which distances themselves from groups of mainstream marginalised communities under the government aid. The community of the Chenchu tribe awaits peace and a chance to go back to the undisturbed solace they had generations ago.