Pushkar camel fair or locally called as Kartik Mela or Pushkar ka Mela is an annual multi-day livestock fair a bash of cultural fest held in the town of Pushkar.

The fair starts with the Hindu calendar month of Kartik and ends with the Kartik Purnima, which, roughly covers the days of late October and early November of Gregorian calendar. It is India’s largest camel, Horse and cattle fairs. Apart from the trading of livestock, it is an important pilgrimage season for Hindus. 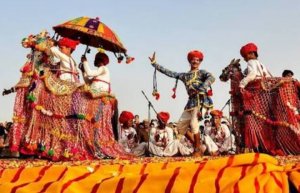 It has also become a significant tourist attraction for domestic and international travellers. The abundance of colourful cultural themes during the winter season is one of the best sensations to experience. Over thousands of people visit Pushkar lake where the event is held. The fair is recognized as one of the world’s largest cattle fair. It is visited by over 400,000 people over a period of 14 days.

Men trade their livestock which includes camel, horse, cows, sheep and goats. Men go up on the group of camels one after the another. The fair brings livestock, farmers, traders and villagers from all over the Rajasthan. Over 50,000 animals are brought in the festival. Owners bring their livestock dressed in colourful attire to be sold.

That’s not all, the fest contains deviated sitting arenas with all modern amenities. The opening ceremony is itself a grand event which includes thousands of camel, horses mounted by riders clad in vibrant traditional Rajasthani attire. 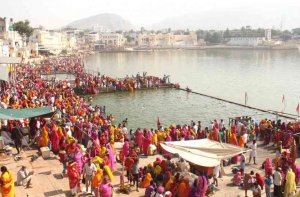 According to the Hindu mythology over 330 gods and goddess assembled at Pushkar lake on the day of Purnima to consecrate the lake. Thus, the lake is deemed to be sacred. Therefore, thousands of pilgrims take holy bath in the lake in order to wash away their sins and pay respect to the Brahma mandir. Thus, Pushkar ka Mela is a blend of cultural and religious energy which is one of the lifetime experience to gain.