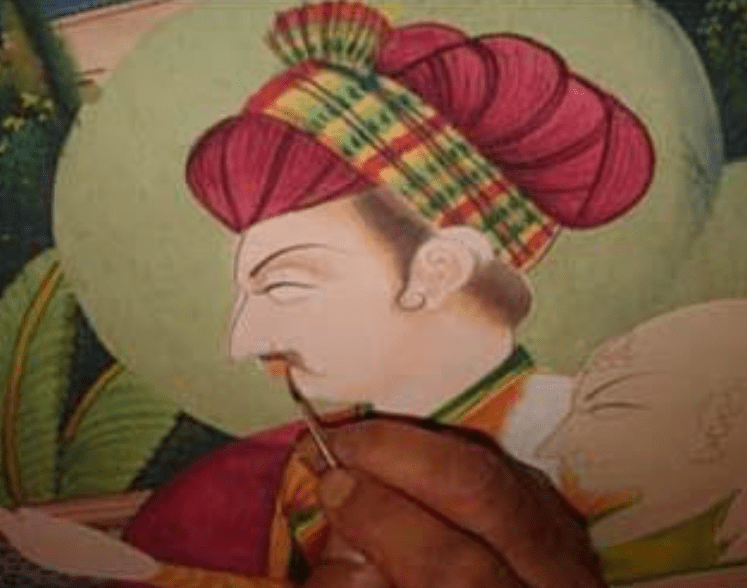 The tradition of paintings in India dates back to the pre-historic times. Caves of Bhimbetka and Pachmarhi show traces of hunting, farming, and dancing scenes drawn on rocks in black or mud colors.Buddhism influenced the art of painting as evident in Ajanta paintings depicting Buddha’s life stories. The Pala miniature paintings of Eastern India dating back to about 11th century are the earliest evidences of miniature painting tradition. The different schools of miniature painting emerged in different geographical locations in the region at varied points in history. These schools included Pala, Orissa, Jain, Mughal, Rajasthan, and Nepal.

The golden period for miniature paintings, however, was the 16thcentury when the Mughals, rulers of Deccan and Malwa, and Hindu Rajas of Rajasthan provided significant patronage to the art. Many important paintings schools came into being and flourished in different parts of the region. They can be broadly divided into Mughal, Rajput/Rajasthan, and Deccan schools. The Raj put school began to absorb elements of Mughal style due to the growing alliances between the Rajput kingdoms and Mughals. The hill regionsof Northern India including Basoli, Guler, Kangra, Bilaspur, Kullu, and Mandi saw the emergence of Pahari school with the Kangra School of painting becoming noticeable in 18thcentury. The latter though influenced by Rajasthani and Mughal miniatures developed a distinctive style. Kashmir miniatures also became prominent during this period though it is believed that they first appeared as early as 67thcentury.

The painting styles that emerged during the Mughal reign included elements of Hindu, Persian, and European styles. Portraits became an important component of paintings introduced during the reign of Mughal king Akbar. Jahangir who succeeded Akbar focused on specialization and reduced the number of artists at the court. These artists migrated to provincial kingdoms where they received patronage by provincial officials. Another element introduced by Jahangir was the study of nature. It is important to consider the fact that the period described above was one of political stability and vital social and economic structures that supported the growth of artistic traditions.

Rajasthan witnessed the development of several regional schools of painting during this time like Mewar, Bundi-Kota Kalam, Jaipur, Bikaner, Kishangarh and Marwars chools. Paintings depicted themes such as court scenes, gardens, forests, palaces, hills and valleys, deserts, life of Lord Krishna, love scenes, hunting scenes, and animal fights. The different painting schools could be identified by the subjects depicted and use of colors in the paintings. Other important components of Rajasthani miniatures are Ragmala(representing ragas in classical music), Geetha Govinda, Ramayana, and Bhagvat Puran.

History of technique
Traditionally vellum or surface made from skin of sheep, goat, or calf for writing and painting was used. With the introduction of paper making technique by the Chinese, however, vellum was gradually replaced by paper, a more versatile material. Introduction of paper gave a great impetus to painting and calligraphy. While it was introduced to Persia much before, paper came to India around 14thcentury. Surfaces made from materials like bamboo, jute, palm leaf, and cotton were being used earlier to write manuscripts. The paper had to be treated to prepare it for painting like rubbing it with a particular egg-shaped stone and sizing it with starch (rice water). Color palette was obtained from mineral pigments, organic dyes such as indigo, conch shells, precious stones, and real gold and silver.

Rajasthani miniature paintings can be classified in 4 main schools:

•Marwar School: important centers are Bikaner, Jodhpur, Kishangarh, Jaisalmer, and Ajmer. Jodhpur paintings depict accentuated facial features like large and curving eyes and rolling clouds can be seen in the background. Bani–Thani, the love of Sawant Singh who ruled Kishangarh, has been an important theme in the paintings of this region.

The Marwar and Jaipur schools reveal a greater Mughal influence than the other two due to the former kingdoms’ closer political and social links with the Mughal ruler’s of Delhi.

Producer communities
The artists engaged in painting are referred to as ‘Chitrakars’. Traditionally, miniature art was not strictly caste or religion based. The artists of calibre were selected by kings and feudal lords who would patronize them. Both Hindu and Muslim artists have been engaged with this art form and have enriched it with their distinctive elements. However, the artists in most cases belonged to upper castes. In contemporary times, however, the art can be learnt by anyone who has the inclination towards it.

Process
The canvas surface on which the painting is made is prepared first. A ply board is taken for the purpose. The ply board can be waterproof or not. It is coated with touchwood polish to protect it against termites. The canvas cloth that will be pasted on it is first bleached to remove any impurities that can affect the cloth later. It is then stretched tightly on the ply and pasted on it with starch. A plastic emulsion (duroplast brand is used) is applied on the canvas so that the color does not seep inside the cloth. The paintings are also made on handmade paper and are called ‘basli’. 3-4 layers of handmade paper are stuck together using starch. The surface is then coated with ‘khadia’, a paste to stiffen it.

The canvas is now ready for the artist to work on. The borders are first marked out with a pencil. The artist sketches the picture on the canvas. These days it is mainly the earlier works that are being copied. The artist thus sketches his drawing referring to an earlier work. 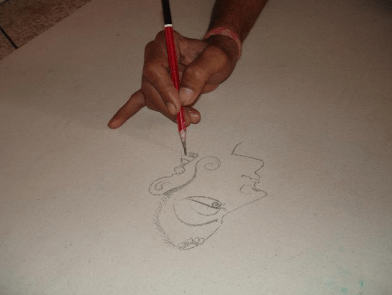 Next stage involves coloring the painting. The desired base colors of the motifs are filled in first such as the basic colors of clothes, walls, trees, etc. The faces, arms, and feet of the figures are left untouched.
The artist then works on the outlines. Next he starts filling in the details such as leaves and flowers on the trees, clouds in the sky, details of clothes, details on background walls, etc. Shading work on motifs is done with squirrel-hair brush whose fineness is suitable for the most intricate work. 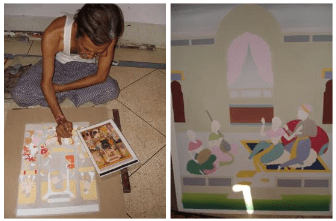 The face, arm and feet of the figures in the painting are done at the final stages. According to the artist the figures depicted attract the maximum attention of the viewer and flaws in their depiction are very apparent to the viewer. The artist therefore spends maximum time on detailing them with the face being the most important. The face is painted last. The outline of the face including forehead, nose, lips, chin, and neck is painted in one single brush stroke when the face is sideways. The face is not painted with a base color. Instead it is lent color only through shading. Remarkable detailing captures the side locks, eyebrows, eyelashes, etc. 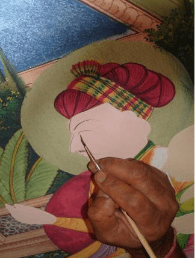 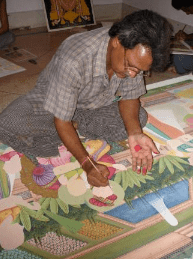 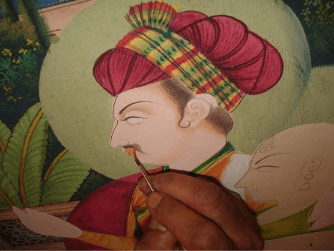 Embellishment of clothes and ornaments on the body are drawn last in the entire painting. A golden powder mixed with water is used to draw the ornaments on deities, emperors, etc. In some cases real gold leaf called warkis used. Sometimes embellishment with sequins is required. For this purpose grooves are made on the canvas with a pointed iron needle and sequins stuck with glue. 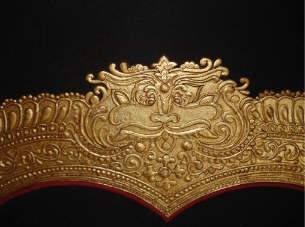 After the painting has dried up it is covered with butter paper and rubbed with a smooth oval shaped shell piece. The painting surface becomes smooth and acquires a luster. There is an increasing demand for antique look. The artist uses potassium permanganate that dulls the colors and provides an old-world look to the work. 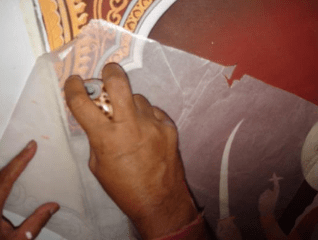 Miscellaneous
Miniature paintings have long been favored as souvenirs by tourists –of foreign origin and Indians living abroad -visiting India. Their depiction of legends, periods in history, and fine brush strokes have made them popular among this section. Within the domestic market the average customer is interested in miniatures only if they are reasonably priced. While an art lover is willing to pay for the work the average buyer is not really concerned with the intricacies of the work.

Today the artists are mostly reproducing the earlier works. A number of artists have also taken to painting miniatures on wood furniture that has gained huge popularity in the export market. The vegetable colors used earlier for painting have also been replaced by poster colors that are readily available in the market.
India miniatures that have for decades represented Indian art abroad in museums, galleries, and auction houses, however, is facing competition today from contemporary Indian art that is gaining huge popularity among art lovers abroad.