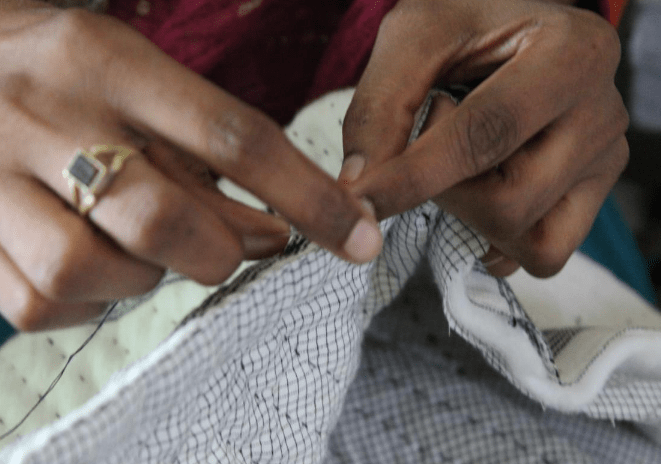 Rajasthan literally meaning “Rajaon Ka Sthan”..residence of the kings. Rajasthan is the royal pride of India and Jaipur its capital is the red, bold, and righteous and the ever so auspicious tilak on its forehead.

Jaipur the land of victors is also a house to many traditional crafts brought here by Maharaja Sawai Jai Singh II when he replaced his capital from Amber to Jaipur in 1727 AD with the help of his court architect Vidyadhar Bhattacharya-a .

One of these crafts includes the Jaipuri RAZAI the art of quilt making. RAZAI typically is like a duvet or a bed comforter, traditionally made using hand spun and hand woven khadi as the fabric shell, carded cotton used for the filling also hand carded using a pindar(an instrument like a bow) and hand needle stitched.

Evidences of hand quilting dating back to Gupta age and also seen on Ajanta murals suggest that this craft has been and is an integral part of India. Though there is no set origin of Jaipuri RAZAI but it is said to be connected to the Vishnuism’s (a Hindu sect who preach Lord Vishnu now known as Vaishnav) strict vegetarian rules developed in 16thcentury AD. Due to these rules, that time leather and wool was banned in certain religious sects of India. However the cold nights in Rajasthan inspired people here to quilt bed covers, clothes, floor spread and whatever they thought to be essentially thick surface. This craft then further enhanced itself aesthetically as soon as it found royal patronage.

JaipuriRAZAI is a beautiful craft which combines the beauty of the past with the hopes of the future.

Global Presence
In excavations hand quilted pieces or there evidences (like descriptions in texts, portrayal in carving and murals) were found in almost all ancient civilizations be it Egyptian or Chinese. The earliest surviving quilted pieces used as a rug was found in magnolia which dates back to 1stcentury BC-2ndcentury AD. The craft of hand quilting can be seen throughout history all over the world. It is said that Indian quilting was bought to Europe by the Portuguese which then grew to be known as French quilting. Europeans also make fluffy duvets filled with feathers. In Central and South America people living in mountain area developed tightly woven blankets. In Appalachia which lays in Eastern United States crafts women have a rich history of making labor intensive quilts which have intricate patterns on them. Hand quilting is a popular craft in native America. Patchwork and wadded quilts are famous of North America.

Geographical Region
Hand quilting of fluffed cotton in India is unique to Jaipur and Jaipur outskirts. In Jaipur the craft can be seen in Topkhane Ka Rasta, Chaura Rasta, Chandpole BzaarSanganer.

In Jaipur outskirts one can find this craft still practiced in traditional ways in Amer and adopted in Phagi. This craft is practiced in Muslim residential areas because a major part of it is done by women. The burkha system does not allow women to leave homes for longer durations. This craft was limited to Amber however Maharaja Sawai Man Singh delighted by the fine work of the artisan Kadar Bux bought the artisans to Jaipur with the help of then Prime Minister of Jaipur Mirza Ismail, where they could practice trade instead of just serving the royal family. His descendants still practice the craft and there shops are located opposite Hawa Mahal. Following Kadar Bux many cotton carders came to Jaipur to establish themselves.

The community practicing this craft is Mansoor community a subset of Muslims. Cotton carders are called Dhunia or Pindara after the instrument (pindar– bow) they use to clean and fluff the raw cotton.

In the community both male and female artisan participates actively in the craft. But it is only the female artisans who do the tagai. Children are taught this craft at an early stage so they can carry the torch forward.

One interesting thing that can be noted about the Mansoor community is that they believe in monogamy even though their faith and law permits them to practice polygamy.

Materials
The main raw materials the need are rooi (cotton) and fabric.
Cotton is procured from Sri Ganganagar, when the crops come in. In olden days the royal quilts used to be made using silk fabric and the quilts for the commoners using khadi. In earlier days dhake ki mulml very fine quality of mulmul was procured from Dhaka (capital of Bangladesh) then in India. But now vastly cotton fabric (mulmul–voile) is used which is imported from south. Other than cotton velvet fabric is also used, which the artisan says is popular amongst Punjabi buyers. They use silk fabric as well. Other than fabric and cotton they also need thread as a major raw material for tagai which is procured from the local markets such as RamGanj Bazaar of Jaipur. 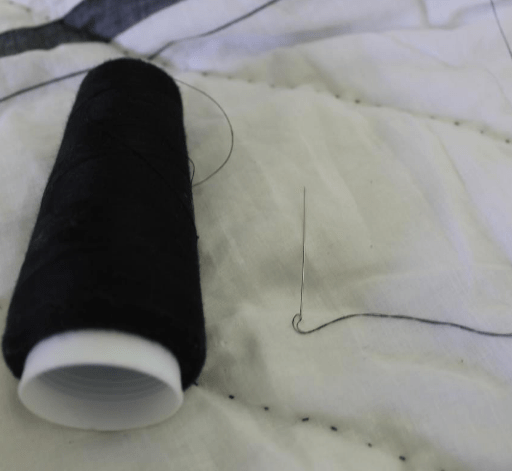 Process
First the shell of the AZAI is prepared using fabric on a sewing machine. (Fabric is generally block printed and now days screen printed). 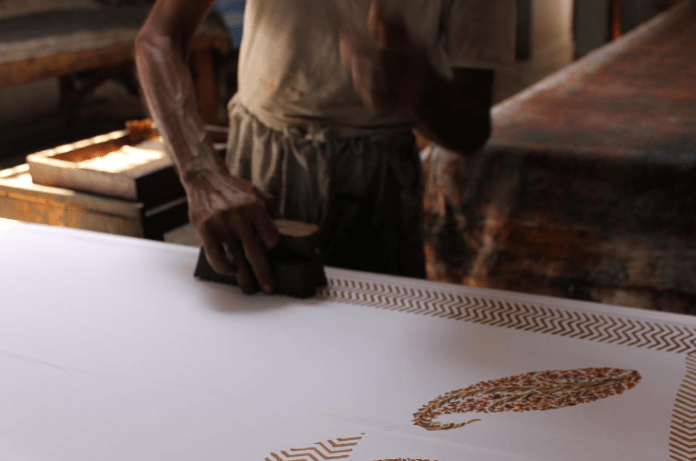 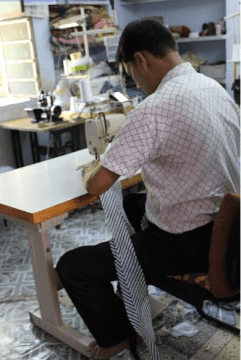 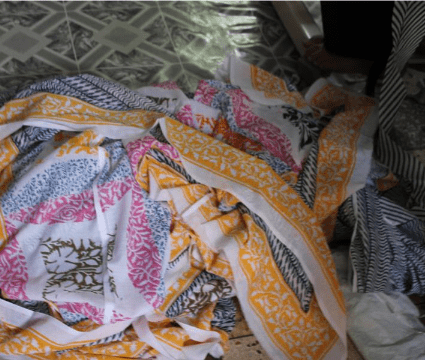 The process of quilting starts with weighing of the cotton. This is then carded and fluffed in the machine. Typically 1 kilogram cotton is take which becomes 100g after carding. 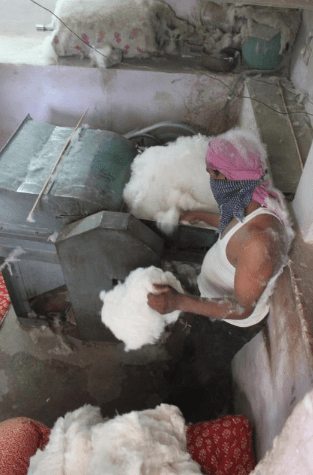 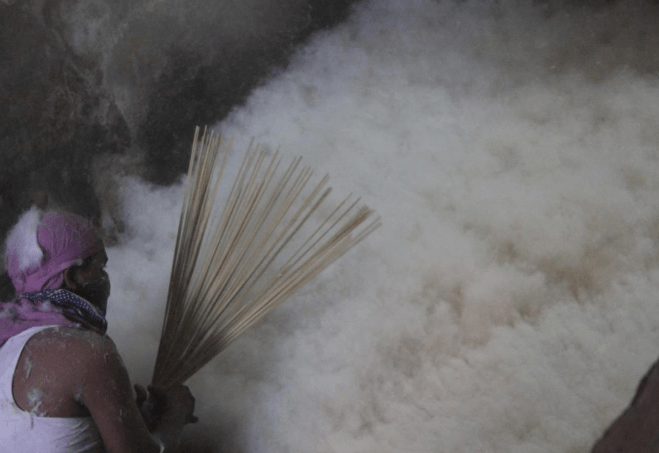 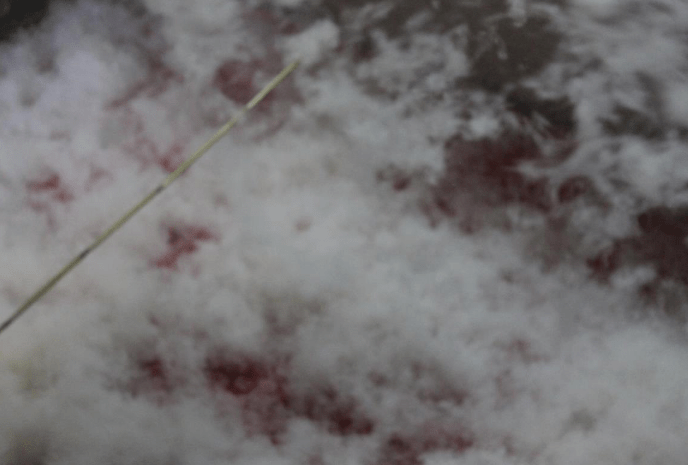 The shell is turned inside out and then again to spread out the cotton evenly, it is beaten using a wooden stick and hands. 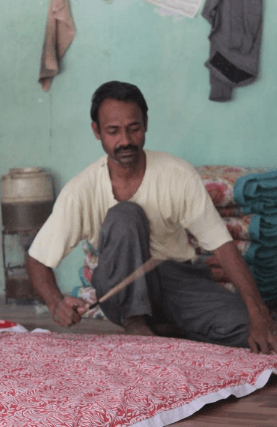 The mouth of the fabric shell is stitched and the RAZAI is taken forward for tagai (art of threading). 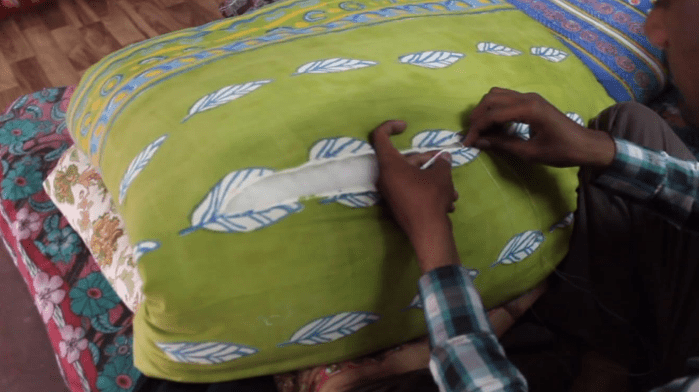 Before tagai generally if the pattern is complicated it is drawn on the fabric using needle and ruler. 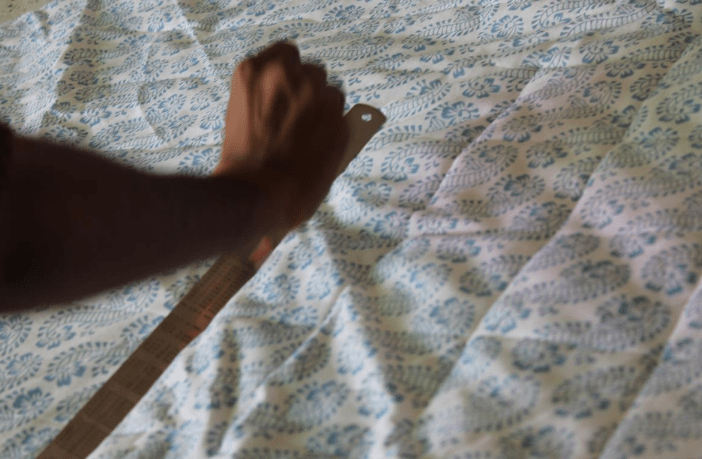 Tagai (art of threading) is done only by women. Tagai is basically running stitch. The price of a RAZAI depends on the fabric used and the fineness of tagai. Finer tagai is done by thinner needle and better skilled craftswomen. There are basically three types of tagai that can be seen. First is the normal tagai which is done using thick needle and thread with big gaps between two stitches. Second is gudrdi which is twice as fine as normal tagai but is also done using the same needle and thread. In gudrdi the crafts women are careful about the uniformity of space left between two stitches. Third is peeke work. This work requires a very thin needle and thread. It takes twice as much time to do it. Quilt made using this technique lasts longer than the normal quilts. Now a day this work is done for export purposes. 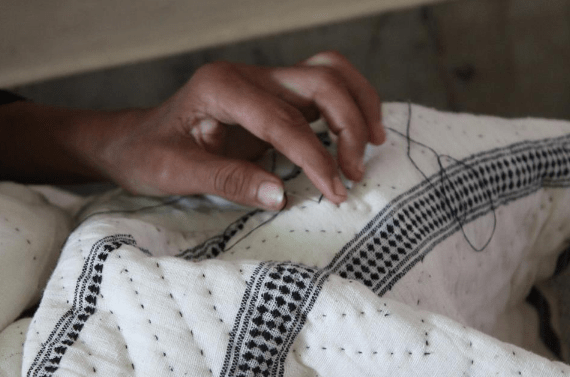 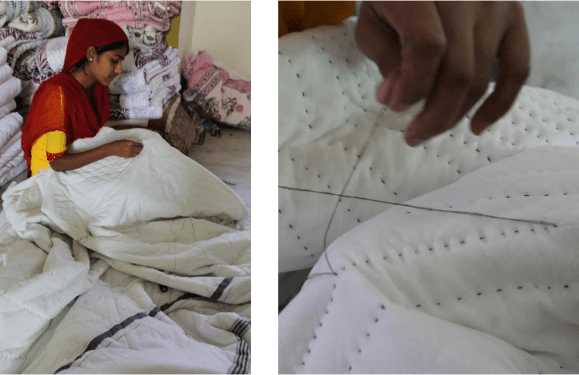 Tagai being done by crafts women 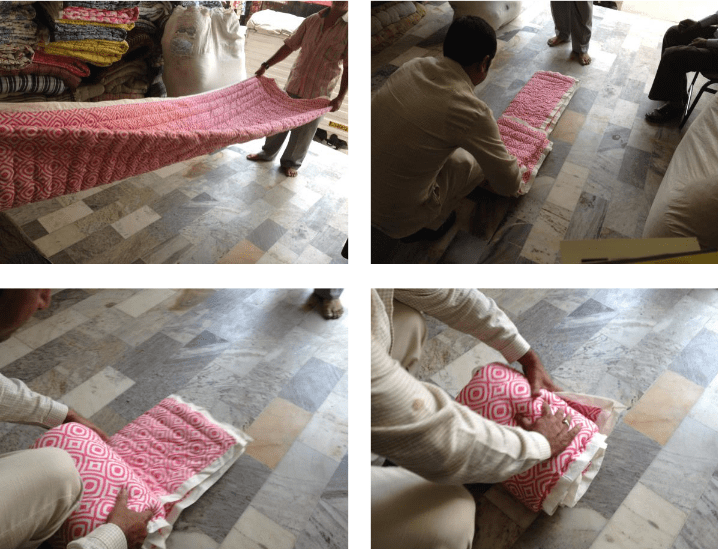 For storage the RAZAI iskept in rolls. 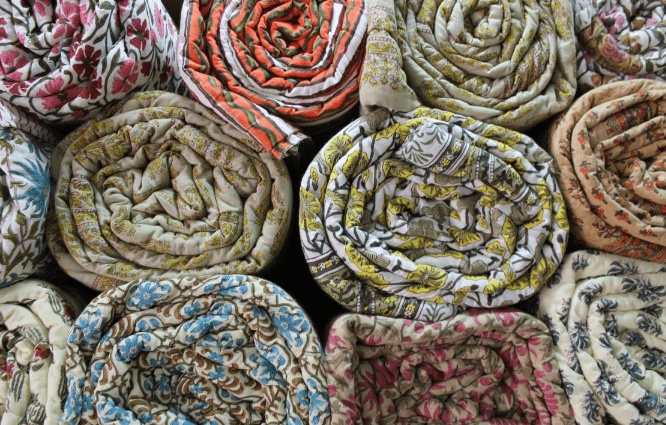 Designs/ Motifs
The engraved design in brought about by tagai. 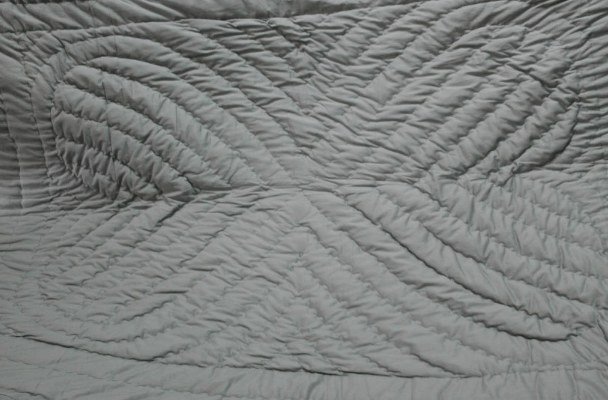 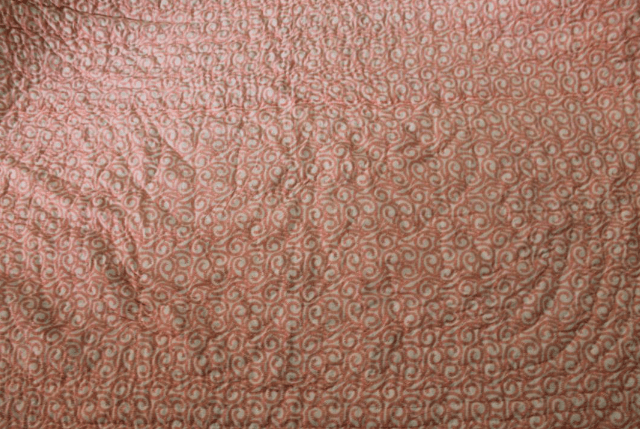 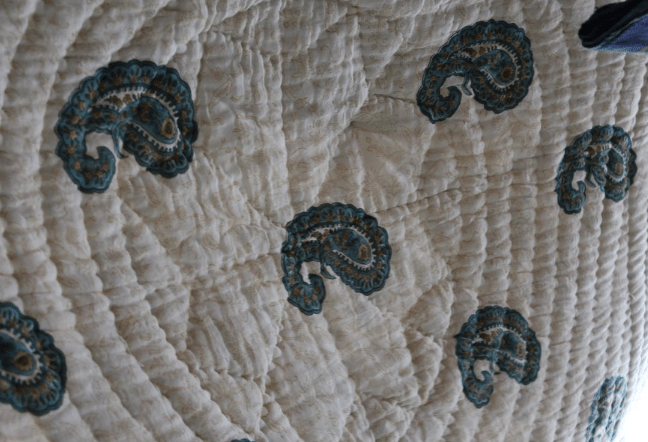 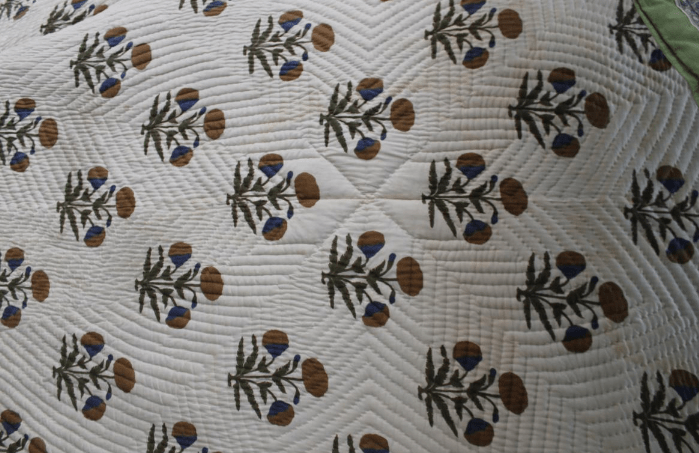 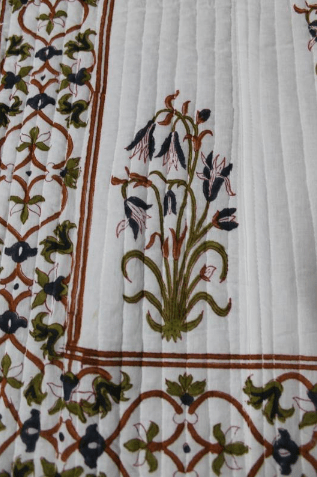 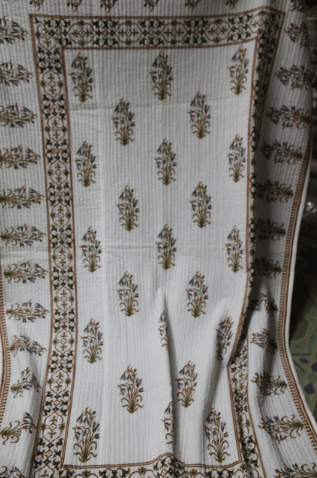 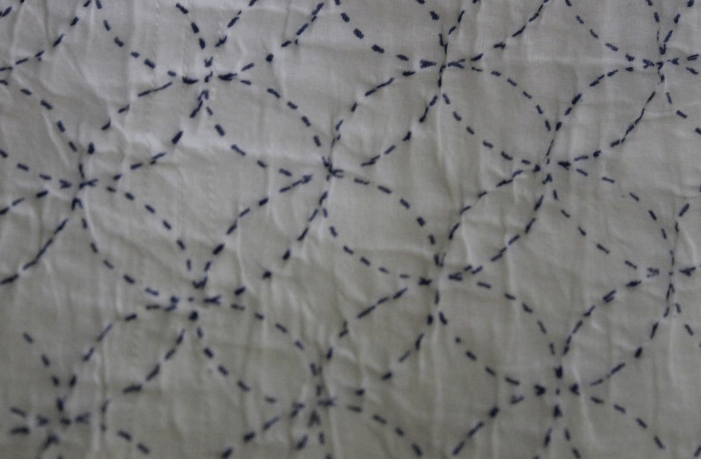 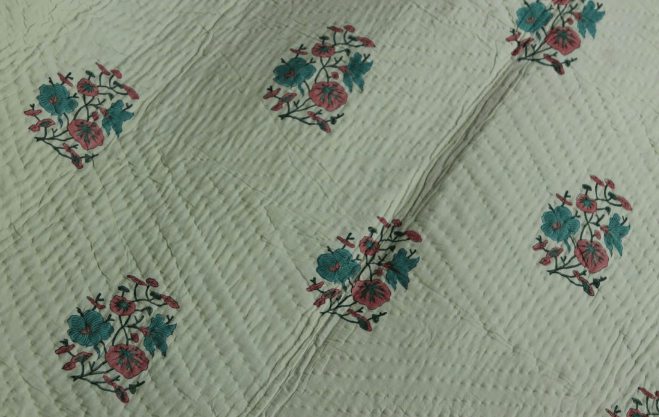 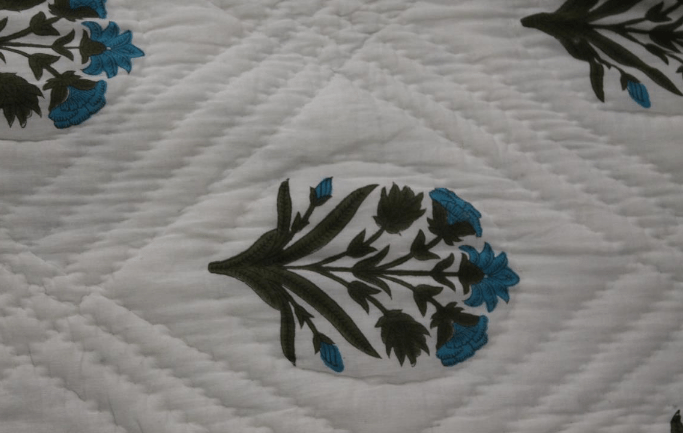 Products
Traditionally using quilting the products that were made were RAZAI (quilts for covering), angrakha (long coat worn by Rajputs ) and vests. Now days the RAZAI market is still a huge hit. They also make bags, kurtis, cushion covers and many more products using the art of quilting. 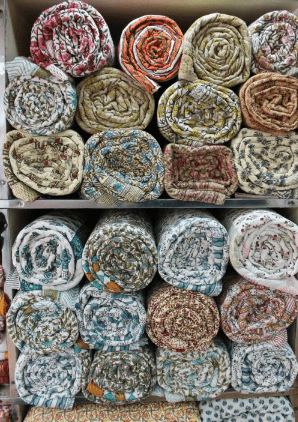 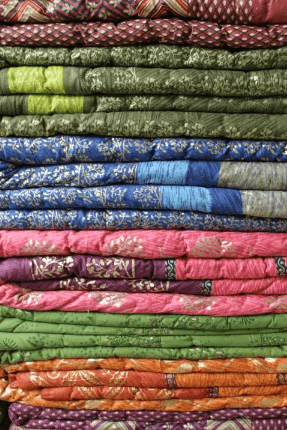 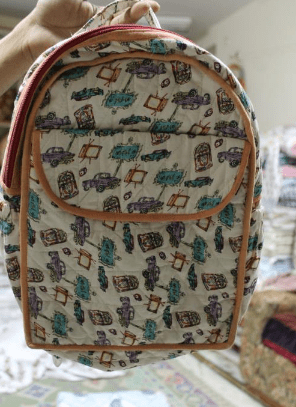 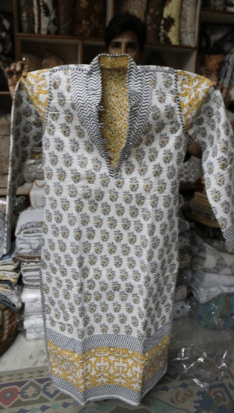 Innovations
In bygone days instead of a fluffing machine a pindar (bow) was used to fluff the cotton and remove the dross. Now a carding machine has replaced it. Apart from making the traditional RAZAI as a cover in nights, master artisans have started to make new products out of quilting. Like bags, kurtis, cushion covers, etc. No innovations in terms of tagai have happened in the recent years. Challenges the major challenge faced by the craft, as informed by the master artisan, is the lack of labor. Artisans from the present generation do not want their children to enter the same field.

Challenges
The major challenge faced by the craft, as informed by the master artisan, is the lack of labor. Artisans from the present generation do not want their children to enter the same field.