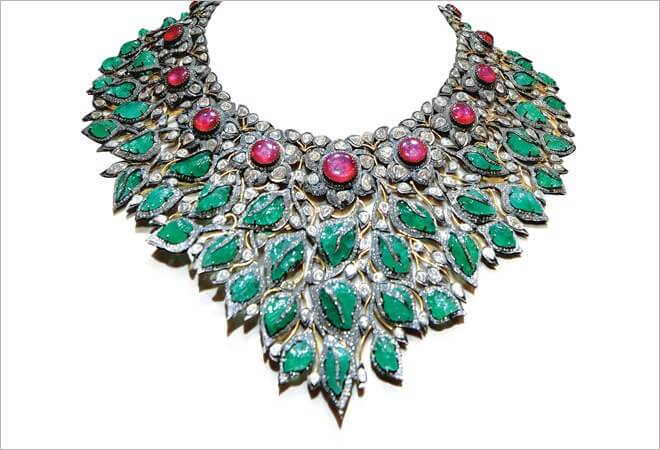 Some people need music to meditate, some need tree to sit, but there are people who fend gold for peace. Because the fine nuances of creating intricate patterns in gold require such keen patience and concentration, that the art indeed becomes a true meditative bliss to the senses.

When the hunting tigers and stags from the wild imagination of Nathuji Soni descended onto the canvas of gold, Thewa was born about 300 years ago in Pratapgarh district in Rajasthan.

The magnificent art of Thewa impressed Raja Sawant Singh of Pratapgarh so as he gave away an immense amount of wealth to Nathuji and bestowed upon him the title of ‘Raj- Soni’. The title Raj-Soni, the chief jeweller of the court are being passed on through generations.

This small cluster of craftsmen performing this craft was formed by mutual learning amongst family and friends. This craft is performed rather secretively. 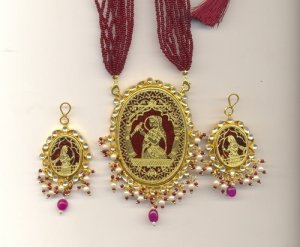 This craft was nourished during Victorian Era. The set pieces of gold were sold out to British women who either visited or lived in these places, these ladies took them back to Europe as souvenirs.

Their work was later recognized by European jeweler historians in the British antique market. Some souvenirs are still preserved in the collection of Queen Elizabeth (London Museum)

Thewa comes from local dialect divided into two words, Tharna- meaning to hammer and Vada which means silver wire. Both of these are an important aspect of this art. While in olden times only jewellery and chests were made, today skill masters have forwarded their expertise to items which both men and women adore alike. 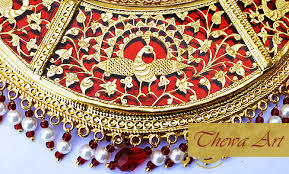 Moghul miniature paintings have been an inspiration for Thewa art. The subjects of this orthodox design covered themes from mythological genre to secular ones. Popular subjects among the former are Srinathji, a form of Krishna installed at Nathdwara and Radha-Krishna.

Today the art is more conventional in style and it is been blended with a variety of techniques like Meenakari, diamond setting etc. and also a new palette of materials.

But no material honor can compete with what the Raj Soni has accomplished for himself by ritualistically engaging himself in this art of controlled precision – a calm and collected temperament that leaves him happy to confess – ”I’ve lost the ability to ever get angry”. 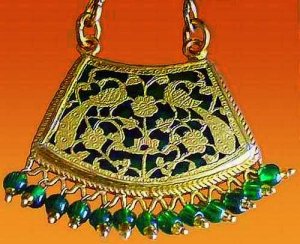 In the last century Thewa unit makers prepared elaborate settings in a gold wire in the Canetille style, so called after a contemporary European style. In the days of royal patronage, Raj Soni Parivar had not only gained recognition in Rajasthan but it was also enhancing the art in India.

To encourage this enchanting and unique art form the Government of India issued the awe-inspiring postage stamp in the year 2004. To add to its laurels the art also won nine National Awards since 1966.

Thewa jewelry has been appreciated around the world for the fine work. The Raj Soni family are in Limca Book of World Records -2011.(Only one family has 9 national awards).

The craft requires a working plane made locally using ‘chapadi’ (purified lac) to create a hard bed. Pure 23-carat gold, silver strips, Belgian glass and strings of beads and stones are amongst the other raw materials involved.

Small pieces of gold are beaten into several slender sections, about one-tenth of a millimeter thin and mounted like a canvas mat on the lac plate. When the plate is warmed, the metal gets slightly embedded into the lac.

Tools such as ‘Hummaney’ (forsep), ‘Katya’ (cutter) and ‘Tankale’ (to cut out the jaali) are then required to sketch and precisely cut out the pattern on the gold foil.

The patterns either carry local narratives of hunting expeditions within miniature foliage and streams, animals and birds or they indicate the nature of indigenous myth like pictures of Radha Krishna, Sri Ram or Hanumanji.

It becomes essential to constantly check on the lac bed for air bubbles else it may cause an avoidable denting of the fragile gold foil. Master craftsmen, however, do not sketch; instead, they directly puncture the blueprint with fine chisels and sharp tools.

But such is the single-minded attention required, that any error or deviation in the process of splitting the pattern can result in the entire piece of foil being wasted. All such discarded pattern sheets and cut outs from the jail are melted again and prepared for the fresh work.

The entire jali is then laid out in a frame of silver wire called “vaada” to lessen the risk of damage. The silver wire frame used in this task is pre-assembled on brass dies and soldered to precision. The entire framed composition is then set out on a mica sheet using forceps with extremely controlled and steady hands.

Once pinned together over the mica, the two metals can be easily soldered and the mica is then removed. The delicate entity so obtained is then placed on a piece of coloured Belgian glass using a bonding technique that remains to be a unique secret within the family. 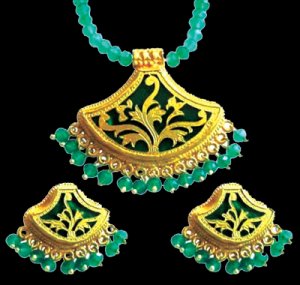 To add a further glint to the piece, an extra layer of shiny foil is placed on the bed of the ‘dibiya’. The beauty of this art lies in the fact that, even though the amount of gold used is minimal,

the eventual product gives an impression of a gold-rich heavily ornamented piece. A 4” X 6” photo frame requires only 5-6 grams of gold, but it gives the illusion of a gold feast to the eyes. The entire procedure is meticulously carried out in daylight only.

This craft is secretly guarded by the family baring even their own daughters, who they might settle in different clans later. In contrast, the boys of the family are trained to be in the profession from the age of 10. So when they finally start doing the art, the expression and depiction of these jali scenes effortlessly flow out of their hand directly into the foil.

The ever-increasing prices of gold have rendered this practice as a good deal for those who subscribe to more value for less money.