The World of Ajrakh Block Printing

The rich and bright colours of the Ajrakh cloth light up the dry and weary atmosphere of the Kachchh desert. This technique of printing is age-old and was originated in the well-known Indus Valley of Northwest India, and its legacy is still being followed today. For the people who live in and around the Kachchh, the cloth they wear is the symbol of who they are, and they make sure that in the bland air of the desert, their cloth sets them apart and makes the area livelier. The cloth in Kachchh does not only gives the person their look, but it also reveals the details of the persons economic and social standing. This is the main reason why Ajrakh cloth is given so much importance.

The nomenclature of Ajrakh is a multitude of stories in itself. The most popular of them being the word Ajrakh meaning “keep it today” in the local language. Some also suggest that it is related to the indigo plant, which is called “Azrakh” in Arabic. It was present predominantly in that area until the earthquake of 1956 happened. The patterns woven into the Ajrakh clothes are of a complex geometrical shape that is made to recreate the constellation of the sky using indigo, black and white colours. The shapes on the Ajrakh clothes replicate the intricate Islamic architecture with its netted windows and arches. 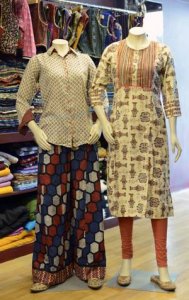 Ajrakh is very popular with the communities in the area of Kachchh, including the Rabaris, Ahirs and Maldharis for their turbans, lungis, stoles, and patiyalas. Its influence is more widespread than that, seeping into religious beliefs too. These cloth pieces are gifted during the festival of Eid, numerous festivals of Hindus, and also during marriage ceremonies. The Ajrakh cloth is made in an extensive sixteen step process which includes washing, dyeing, printing, and drying. This does not just require a high level of skill, but also a lot of concentration to make sure that the colours are spread evenly and at a faster rate. To make this craft more authentic and connected to its roots, the local printers use natural gum, wood, flour of Kachika, the flower of Dhavadi, seeds of the pomegranate, harde powder, locally cultivated indigo, and alizarine. These are some of the many ingredients used in this craft. 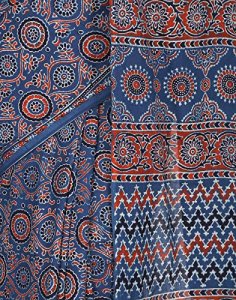 The block printers of this craft used to have a very close relationship with its customers at earlier times. However, with the introduction of new synthetic materials, which are very affordable and have been replacing the Ajrakh clothes at a tremendous rate, these connections seem to have broken. This resulted in the extinction of many beautiful dress patterns and styles of the Ajrakh printers. The most notable of them being the traditional lungi, whose significance is dwindling at a rapid pace. Some of them are also being replaced by their synthetic counterpart, such as the Pada. Women of that locality have also begun to replace their traditional Ajrakh sarees with synthetic ones as their outfits. However, the demand for Ajrakh cloth is still very high in the international market, which is the reason why it is still surviving.