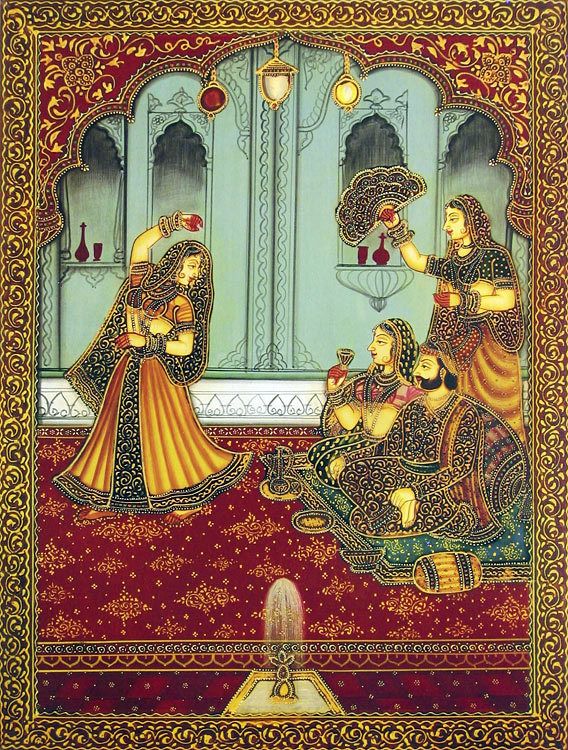 Tanjore Painting, the rice bowl of Tamil Nadu and more preferably known as Tanjore was the capital of the Chola Empire in South India. Known for the Brihadeeshwarar Temple which stands unshaken for more than 1000 years, Tanjore is a city with

a rich background of Tamil culture merged with Hindu mythological representations. Apart from these accolades, the paintings from Tanjore mark a significant part of the early 16th century of the city. 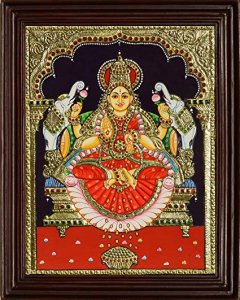 After the end of the dynasties of Cheras, Cholas and the Pandyas, the Vijayanagara Empire were dominant in ruling the Deccan plateau and all over South India.

The paintings of Tanjore were widely influenced by their advent and also the penetration of Sanskrit with the south Indian languages of Telugu and Tamil.  This is the reason why the paintings of Mysore and Tanjore are quite similar as they were ruled by the same dynasty.

Auroville is also in Tamil Nadu, read about it here! 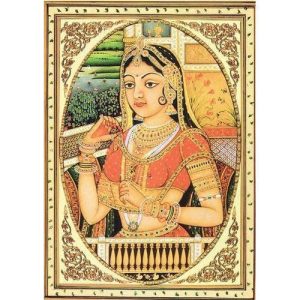 Painting of a queen

Tanjore paintings resemble deities, the valor of the kings and the power they had over the people of the state and also the representation of dance and music as the kings emphasized that art kept the people and the kingdom intact.

With the central figure being at the middle of the canvas, the paintings created by using various products from beads and gum to expensive ingredients like gemstones and gold foils.

As the time went by, the theme of the paintings slowly started to include the new age patterns and personalities like the Nayakas, Sikhs and the Marathas.

Dev Deepavali is the festival of gods – click here to know more! 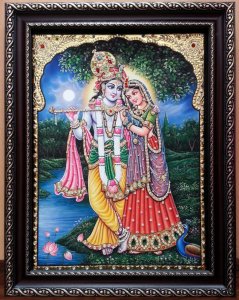 The paintings are available as in papers, canvases and in printed sarees but the conventional method of this art is done on a wooden plank and they fetch a hefty price today in the market ranging from few thousand rupees to even lakhs.

The paintings of high quality are believed to bring good fortune and hence are kept in offices and in the pooja room of the houses with the planks made out of expensive teakwood.

Do you what Kutch is famous for? read the article here! 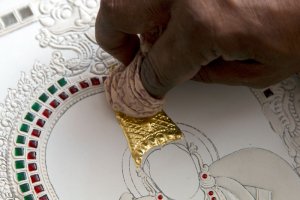 Gold foil embossed on a painting

The gold foil coating on the painting is the trademark signature and is coated using Arabic gum. This gold foil is considered to radiate positivity within its sphere of influence.

The Arabic gum also helps to engrave pictures to give it a 3D embossed effect. As paintings and photos have a spiritual connection in the Hindu community, the paintings of the deities are kept as idols for worship.

As the demand for art and craft are slowing increasing around the world due to the intervention of technology into the conventional method of marketing and business.

the Tanjore art has gained momentum over the years even though it is now professionally practiced in very few parts of Tamil Nadu. Rest assured, there is no doubt that the art will stride and adapt with time.