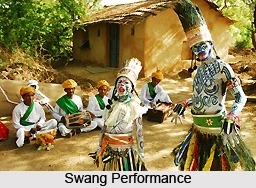 Swang dance basically is a folk dance form which means imitation. Saharans, an ancient tribe of Rajasthan, means the forest dwellers, are believed to be the founders of Swang.

A group of active participants comes together to perform this ancient rural dance form. They used Swang – a form of open dance theater to depict:–birds, humans, animals and went to a range of complex series of mythical stories.

Swang comes with a series of costumes, but interestingly there’s nothing specific about it. It is because Swang as an art form has never been restrictive; it gives full freedom to the Artist to imitate the character to the spiritual level. And therefore no specific look for a character is finalized.

A typical swang performer is decorated using organic paints such as turmeric etc, which were collected from forests including various other decorative items like peacock feathers, leaves & twigs etc.  Swang is a major recreational dance form of the Saharians and other parts of North India like UP & Haryana. 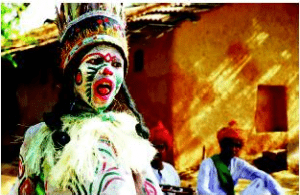 A Swang performance can include a dialogue exchange or a song. Since both genders participate, it is also used to portray love stories. As Swang is a simple act of imitation, men often imitate women. But as it occurs Swang also used to imitate anything that a human brain found interesting. 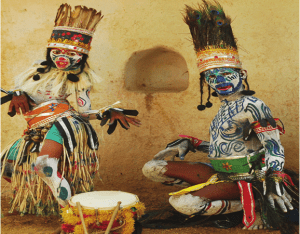 Due to the modernizations in recent times Swang is gradually losing its popularity among folks. A tradition so beautiful, vast and rich is losing its grandeur to urbanization. Most of the performers who pass this tradition to further generations, now due to lack of resources are moving towards other means of employment.