Nagaland is a vibrant hill state Located in the extreme North-East of India, bounded by Myanmar in the East; Assam in the West; Arunachal Pradesh and a part of Assam in the North with Manipur in the south. It offers a rich and incomparable traditional and cultural heritage.

Nagaland has only been open to foreign visitors for the last fifteen years and so it is still largely ‘undiscovered’ and a true hotspot for adventure lovers. It is home to 16 major tribes with different languages and dialects. It is ideal for eco and rural tourism and promotes tribal festivals, mountain treks, home-stays and offers rare opportunities to experience life in its traditional tribal villages. 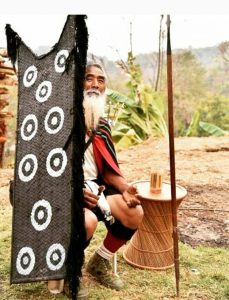 There are many tribal festivals celebrated in Nagaland one of that is the Sekrenyi festival.

Kohima district in Nagaland, India is the land of the Angami tribe. The name Kohima was called after the wild flowering plant Kewhi, found in the mountains. The town of Kohima is located on the top of a high ridge and the town serpentines along the top of the mountain range as is typical of most Naga settlements. 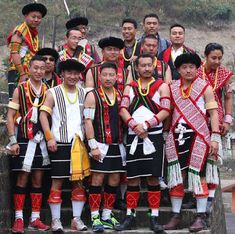 Angamis were traditionally warriors. The Angami men spent the majority of their time in warfare with the hostile village and taking heads. With the introduction of Christianity in the region, the inter-village feuds have come to an end. Although more than 98% of the Angamis are Christians, they are one of the last Naga tribes having an animist population. The Angami animists practise a religion known as Pfutsana. Currently, there are several hundred adherents in nine villages of the southern Kohima district.

Sekrenyi is the major festival of the Angami. It is a 10-day celebration that signifies purification and sanctification (before going to war). Also called the Phousnyi festival, the Sekrenyi Festival in Nagaland is celebrated by the Angami Tribe. This is essentially a ritualistic festival that takes place with a series of colorful and varied ceremonies. The Sekrenyi Festival continues for 10 long days. 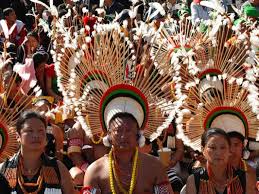 The festival of Sekrenyi is celebrated in the month of February. Celebrated by the Angamis of Nagaland, this festival falls on the 25th day of the Angami month of Kezei. The festival lasts for ten days and is also called Phousnyi by the Angamis. The Festival follows a series of rituals and ceremonies in which the first ritual is Kizie. As part of this ritual, few drops of rice water are taken from the top of the jug called Zumho and are put into leaves. The lady of the household places them at the three main posts of the house.

All young and old men go to the village well to bathe on the first day of the festival and subsequent cleaning of the well is done by two young men during night hours. After the cleaning is performed, the youth guard the well into the night to avoid anyone from fetching water. The womenfolk are strictly not allowed to touch the well water and are only allowed to see that water is fetched for the household before the cleaning of the well.

The next morning (during early hours) all the young men of the village wake up early to take a bath at the well. Young men wear two new shawls, the white Mhoushu and the black Lohe and sprinkle water on their breast, knees and on their right arm. This ceremony is called Dzuseva and is done to wash all the ills and misfortunes. After returning from the well, a chicken is sacrificed with bare hands.

Sekrenyi is a compound word formed by “Sekre” meaning “Sanctification” and “thenyi” meaning “festival”. Sekrenyi festival, know locally as Phousnyi, is a major annual festival of the Angami Naga. It is observed for ten days from the 25th day of the Angami calendar month of “Kezei” usually corresponding to 25 February in the Gregorian calendar.

It is a “purification festival” held to wash off all past sins. The objective of the festival is to renew and “make holy” by cleansing the “body and the soul” of the village as a whole and to bring forth unity among all communities of Nagaland. It also marks the initiation of young people into adulthood and is considered an “identity marker of the Angami”.