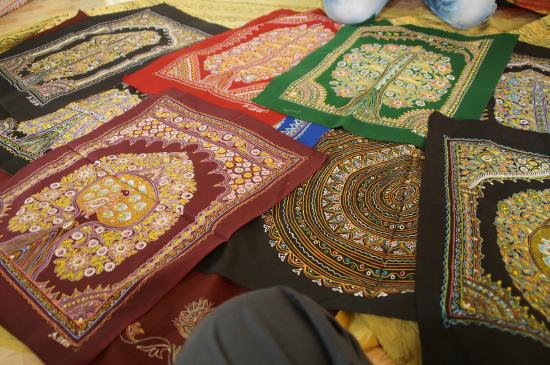 Hello Guys today I am going to share with you some of my views on the painting Rogan. If you Guys are from Gujrat, you may be knowing what am I talking about. Rogan painting, is an art of cloth printing i.e., designs or patterns printed on clothes which is generally practiced in the Kutch District of Gujarat, India. In this craft, paint made from boiled oil and vegetable dyes is laid down on fabric using either a block of metal or a stylus and this way the design gets printed on the cloth…so amazing isn’t it?

Rogan craft is basically a form of surface embellishment which is practiced for over 100 years in our country. But now it is managed by only a single family in Nirona, Kachchh, because people are not aware of its qualities and influence. This art is a rare craft that is not well known even in India. Even most of the other artisans have lost their art and jobs in this field as it was not passed on during partition or lost from generation to generation.

According to previous researches, a special paste made of castor is also used in this craft. The castor seeds are hand-pounded to extract the oil and then boiled and turned into a paste. Colored powder diluted in water is then mixed with this. Also the pastes of different colors like yellow, red, blue,voilet, Brown, purple, green, black and orange are stored in earthen-pots with water to prevent them from drying up. The kalam, an iron rod, which is flat at both ends, with the support of the fingers of the left hand is used to paint half the design.

It is further impressed on the other half of the cloth by pressing the two halves together. As they were inexpensive substitutes for embroidered textiles or embroidery work, they were popular alternative textiles for clothing.

Today, cushion covers, bed spreads, skirts, kurtas, curtains, jackets, designer sarees tablecloths and wall hangings are painted using this technique. Generally, geometrical designs and shapes are preferred; patterns from nature such as tree-of-life are very popular for wall hangings.
Rogan is done in two ways.
• Firstly, Rogan paste is made from castor oil & other dyes mostly natural dyes like mud, leaves, and plants pounded by hands & heated on a slow fire. The colour pastes so obtained are kept in either earthen pots or plastic containers & then mixed with water to keep them from drying for sometime.

• Then printer dips a thin iron rod into pot of different (any type) coloured paste, takes pastes & places it on the lap first. The cotton mulmul fabric is spread gently on the lap. Skillfully, the sticky paste is lifted in a thread like consistency, with the rod & paints the design on the cloth. As I told you previously Rogan printing is on the verge of extinction as only two families in Nirona village of Kutch and three families in Viramgam, Wadhwan and Ahmedabad are practicing this craft.

• Due to lack of awareness and understanding regarding this craft amongst the Indian consumers, the artisans, the younger generation and the designers are no longer interested in continuing with this craft. Because it requires not only skill but patience, concentration, a kind of creativity, a sense of proportion, an aesthetic appreciation, some of the artistic skills, hands-on knowledge and not to mention visual co – ordination. Rogan painting is done on reversible jackets too and recently a survey was conducted in which the respondents were happy with the attempt they liked the blend of aesthetical and functional aspect in jacket and majority of them said that sample A is rated as excellent work in terms of overall appearance.