When we think of puppets, India comes along with it. As a result, India is known as the home for puppets. The earliest reference to the art of puppetry is found in Tamil classic ‘silappadikaaram’ written in around 1st and 2nd century.

Almost every type of puppetries is performed in India. Evey type has its own significance. Like traditional theater, themes of puppetry is mostly based on the epics and legends. 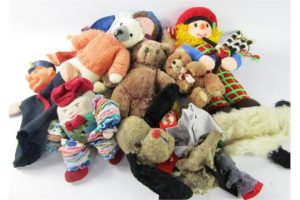 They are fun and colorful. Without a doubt, they are adored by children. Excluding the fun, part Puppetry is successfully used to encourage and motivate physically and emotionally handicapped children. And is also used as a source to create awareness on various environmental topics. Yet there are many other possibilities to be awakened in the art of puppetry.

There are four types of puppetry

String puppetry is the most common type of puppetry found in India. They are also known as Marionette. They are tied with Visible or hidden string and with the help of those string they are moved in different directions.

The puppets used here are made up of wood, wire, clothes stuffed with cotton, rag or sawdust. Some of the traditional puppets can be heavy and hence 1 or 2 rods are used as support. 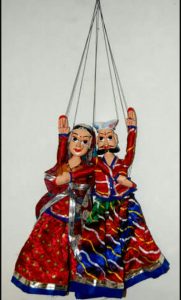 Shadow Puppetry / Shadow Play is considered as the oldest form of puppetry and is popular in countries all over the world. It is believed to have arisen from India and China.

Shadow puppetry is ancient for of storytelling and entertainment using shadow puppets. Shadow puppets are placed between light source and screen. Moving these puppets creates the illusion of moving images on the screen. 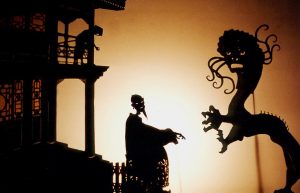 Rod Puppetry is believed to be originated in Asia. In Rod Puppetry the puppets are made from wood and wire and are control by rods of a different kind. The central body of the puppet has a central rod and the arms or at times the legs are also attached to rods for creating the various gesture. Few rod puppets may also have completely working hinge mouth. 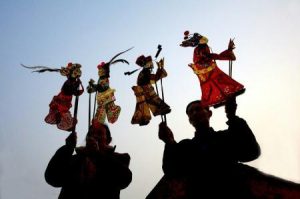 Glove Puppets are worn on hand just like a glove. The thumb and middle finger act as arms while the index finger act as head. Also, know as hand puppets are very small figure having head and arms wearing long dresses. They can be made using socks, wood, paper or terracotta. 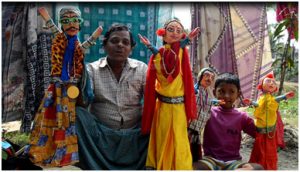 Sundry Puppetry is called by different names in different parts of India, Kathaputli in Rajasthan, Kundhei in Orissa, Gombeyatta in Karnataka, Tholu Bommalata in Andhra Pradesh, Pavakoothu in Kerala, Yampuri in Bihar, and so on.