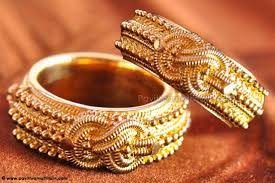 The holy ring has it’s roots attached to the Sri Subrahmanya Swami Temple of Payyanur and is made from the consecrated Darba grass and is worn during the rituals of dead ancestors or pithru bali.

The temple urged the devotees to wear the ring during the rites and it’s usually worn on the right ring finger. The uniquely knot shaped ring has evolved to be made of gold or silver for permanent use, unlike the darba ones.

In Malayalam, ‘Pavithra’ and ‘Mothiram’ mean purity and ring respectively. After the Subramanya Swami temple was destructed by Tippu Sultan, it was decided by the Tantri of the temple to renovation and reinstallation of the deity in 1838.

The idea of creating the spiritual ring also dawned for the benefit of all devotees and the secret technique of making it was imparted from the Tantri to Chowatta Valappil Kelappan Perunthattan.

The three-line on the surface of the ring represents the three rivers of the human body: Ida, Pingala and Sushumna. It is said that when the three rivers combine, it awakens the ‘Kundalini Shakthi’ or the vital energies of our body.

The Payyannur Hindus claim that wearing the ring can arouse the power of three gods Brahma, Shiva and Vishnu.

The ring is so sacred for the people of Payyannur that the craftsmen give up the consumption of meat and alcohol for the rest of their life and are bound to perform rigorous rituals.

After the completion of the work, the craftsman himself takes the ring to Sri Subrahmany Swami Temple of the Payyanur for Pooja. After the Pooja it becomes vibrant with spiritual energy. The ring is also given to the customers after he is sanctified at the temple.