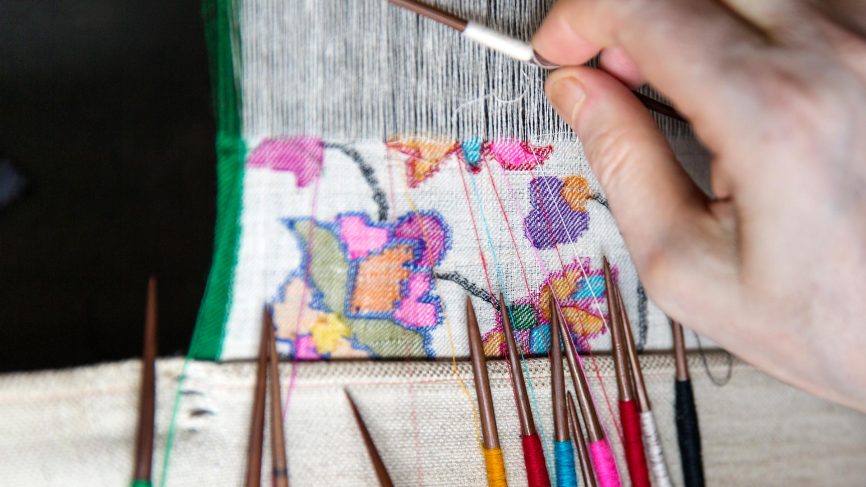 When it comes to cool places in India we come across Jammu and Kashmir in our minds. We also know that the people in Kashmir wear a different type of clothes to keep themselves warm. Let’s talk about Kashmiri pashmina…

Pashmina is a type of wool and as the products are manufactured in Kashmir it is called as Kashmiri Pashmina. The name Pashmina comes from Persia and its meaning is “made from wool”. This translates literally to “soft gold” in Kashmiri. Pashmina shawls are known to pass entirely through a ring with a diameter of about a half an inch. 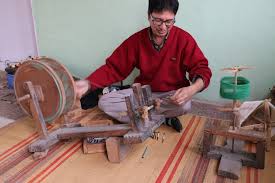 A refined variant of cashmere wool is sheared from goat living at an altitude of 12000 to 14000 ft. The inner coat of the hair is smooth, and its diameter is five times smaller than a human hair. A single shawl generally takes up fleece of three goats.

The wool collected every spring before the goat grows a new coat each winter is cleaned. Combing separates the hard and the soft fibres. Then on the Charkha, it is carefully handspun. The wool merchant separates the yarn for use as warp and weft. For a colourful Shawl, the Rangur(dyer) at this stage would see the yarn arriving at his door. After dyeing, the hanks of wool morph into bobbins and are made ready for warping. 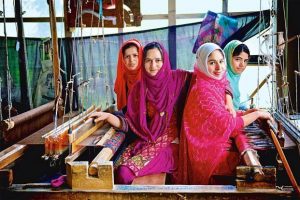 One warp for each shawl at a time is the usual way… The warp (Tani) is wound straight from a bobbin, which stands on the ground with the aid of a warping stick which ends in a hook through which the thread passes. This passes through a ring attached to the ceiling, to keep the flow smooth. The warp winder goes around, winds the warp around the four pegs stuck into the ground. The finished warp is attached directly to the loom. A bamboo stick is inserted in the lease. The warps are then sized.

The designs are laid, and a writer transforms the designs onto a Talim form of script or a series of hieroglyphics. It’s woven as Urdu is read (left to right) and the Talim is read as one reads English (right to left). The Talim consists of a set of symbols denoting various numbers of warp ends and a second set denoting the different colours the Kani (bobbin or small individual shuttles for the different colours of the motif) must go over. The master weaver chants along from the Talim and the weavers play the music on the loom accordingly. The weavers are at the looms for about 8 to 15 days to create a plain full-length Pashmina and the number of days increases with the intricacy of the design if it’s a Kani Pashmina shawl.