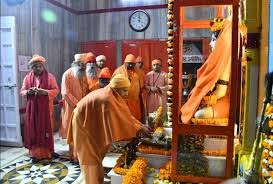 India is well known for various spices, herbs, vegetables and fruits. No one can deny that our culture, as well as various traditions, hold very important values of foods. Every state is not confined to various religions and traditions but bonded with various cuisines having religious importance. Khichdi mela is one of the example of those religion–cuisine bonds. Uttarpradesh one of the northern Indian state holds a lot of importance about religion and it belongs to the ocean of sprititual places. One of the widely visited religious place is Gorakhnath temple located at Gorakhpur. Gorakhpur is one of the place having a lot of religious places. Gorakhnath temple is the iconic temple and it is said that temple is considered as the cultural head of this city.

Gorakhnath temple is linked with the celebration of makar sankranti. On the day of Makar Sankranti, the devotees reach in huge number and one of the reasons is the khichdi fair. Based on old knowledge of acharyas when the sun moves into makar rashi from dhanu rashi, the makar sankranti festival occurs. From this day the sun stays long in a day making after nights smaller. On the day of makar sankranti, a khichdi fair takes place which is attended by nearly lakh of devotees. Fair occurs like other fairs having a lot of sweets shop, toy stores, different kinds of rides and some amusements also. This fair is basically managed on the temple’s campus itself.

Apart from covid 19, the Khichdi fair is still going to take place this year with a lot of safety and precautions. The authorities of the temple have made various arrangements for their devotees inside the temple campus and in Dharamshala also. Khichdi mela conveys to us that our country has a unique tradition where religion meets cuisine.