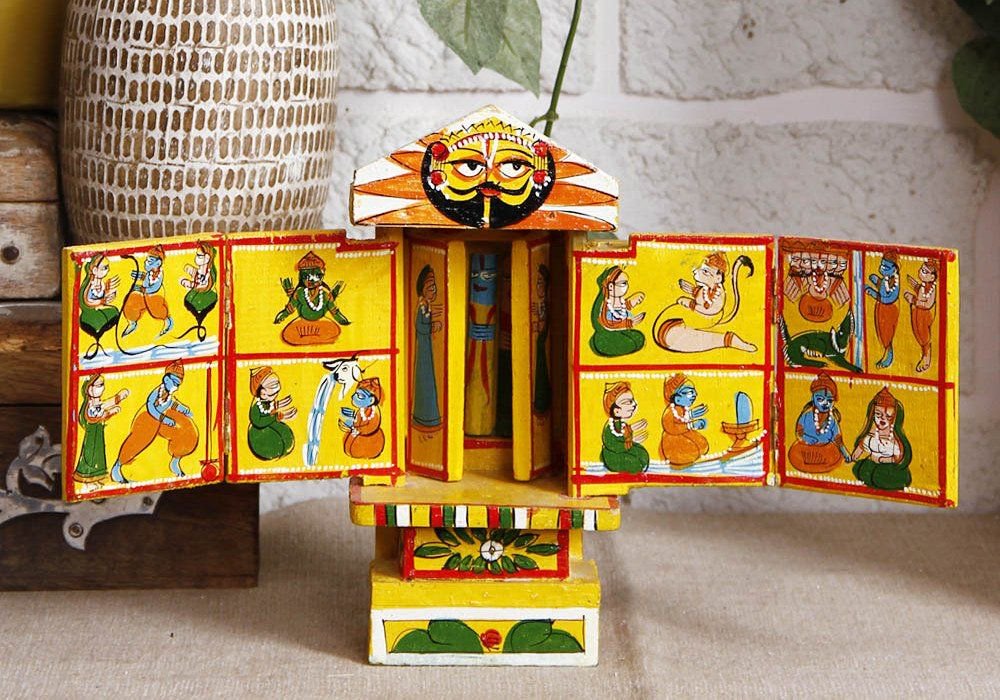 India is a land of storytelling and storytellers. Stories have been told or retold in different ways like dance, music, plays, direct narration, etc.  Before the invention of animation the storytelling was not an easy task but the art of “Kavad Bachana” made it possible in that era.

It is a unique art of storytelling using a box-like structure which is called Kavad. It is most popular in Rajasthan where Kavadiya people tell a story in a traditional way using kavad. This little-known art called “Kavad Bachana” is an amazing blend of picture painting, singing, and narration of mystical tales.

This 500 years old traditional art of storytelling named “Kavad Bachana”  is still alive in the heart of Rajasthan. In the old times.

when there were no schools, the Kawadi people in Rajasthan would make kavads and travel from village to village narrating a story. Kavad is the name of the medium used for this type of storytelling. It provides the visual part of the story hence making the experience of storytelling audio-visual. 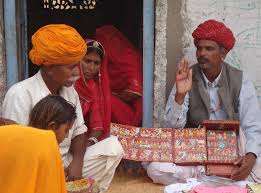 Kavad looks like a colorful wooden box that makes the stories alive. It has several panels hinged together which opens like doors. These doors have small paintings on them narrating incidents from a story. The pictures in sequence form a story.

The storyteller opens and closes these doors as the story progresses. The stories are generally from Ramayan, Mahabharat or Puranas as well as local folk tales about semi-divine heroes. With newer times Kavadi has new stories about social evils and awareness towards modern problems. The narration of the story is very rhythmic and dramatic with terrific dialogues.

There are mainly three communities associated with Kavads i.e. Suthars (the kavad makers), Kavadiya Bhat (the storytellers), and Jajmaan (the patrons). Suthars make this kavad using wood of neem, mango, or sesame.

The carpenter community of Bassi village located near Chittor in the Mewar region of Rajasthan takes pride in being the only Kavad making community in India. Of 25 families living in the village, only 5-6 families are involved in kavad work. These artisans trace their own lineage from the cosmic architect Vishwakarma. 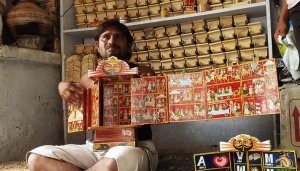 Kavadiya Bhat periodically takes the sacred Kavad to his jajmaan’s house for recital and receives donations in return. Kavadiya Bhats also travel from village to village telling stories. They sit in front of the audience and tell the story.

The stories unfolded in delectable stages with all the fanfare of a show. The outer panels would be opened and the key highlights of the story told, but all was not revealed.

Kavadiya Bhat stops the story at a logical point when the audience’s curiosity is at its peak then he collects donations in a flap beneath story panels and after that only he completes the story. Patrons are those who commission and consume the stories. 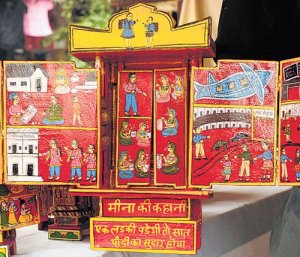 But what happens when a craft innovates so much that it loses its initial purpose? Due to the invasion of TV and other forms pf media Kavads are losing popularity. Kavads are now being sold as a showpiece to foreigners and tourists.

Suthars are now going towards other forms of woodcraft like puppets, miniatures, etc. To preserve the art kavads are now used for educational purposes like a kavad to teach alphabets to kids.