History of weaving in India
Are you looking for Jacquard weaving in India? then to check out this post. Weaving is one of the oldest skills known to humans, dating back to prehistoric times. Clothes have given a distinct identity to almost all ancient civilizations of the world. India especially stands out in this regard.

It has a glorious past in the production of textiles and was especially renowned for printed textiles. The use of printing blocks in India goes as far back as 3000 B.C., and some historians are of the view that it may have been the original home of textile printing.

‘The export of printed fabrics [from India] to China can be dated to the fourth century B.C., where they were much used and admired, and later, imitated.’ i The industry in India grew at such a pace that it became the major supplier of textiles to the rest of the world.

Evidence of Indian textile trade in ancient times has been recovered from China in the East to Italy in the West. These textiles were very expensive and used to bring enormous wealth to India (as Pliny, historian of ancient Rome, complains in his writings).

The Jacquard Loom
During the mid-19th century weaving was mostly done with handlooms. Weavers had to undergo a complex process of maintaining designs in the textile. It was the time of the Industrial Revolution in Europe, where everyday entrepreneurs were coming up with new inventions.

Joseph Marie Jacquard, a weaver and entrepreneur from France, realized that weaving tapestry was a delicate and repetitive process. So, in 1804-5, he designed an improved loom, now known across the world as the jacquard loom.

The functioning of the loom was governed by a series of punch cards. Interestingly, this technology later laid the foundation for the development of computers.

Jacquard Weaving in India
The jacquard loom traveled to India probably during British times and soon became the preferred choice of weavers as they could create complex designs with much less labor.

It also reduced the cost of cloth and brought it within the reach of the lower classes. Today, the jacquard loom is used in various parts of India to produce cloth for products like tapestry, upholstery, saris, etc.

Regions of Jacquard Weaving in India
Jacquard weaving is found in almost all parts of the country where handloom exists. In terms of products, it is used in weaving ordinary cloth for tapestries, draperies, etc., to the complex products like silk saris, shawls, scarf’s and other similar apparel.

Jacquard Machine Fitted Loom
This is the main tool for jacquard weaving. Many of these looms are actually older handlooms converted into jacquard looms by fitting a jacquard machine atop the older loom.

Charkha
There are two types of charkhas (a spinning wheel). One is the older model, which is smaller and looks very similar to the one used by Mahatma Gandhi for spinning khadi (cotton). The other is a metallic one, is much larger and has twice the capacity of the wooden charkha. 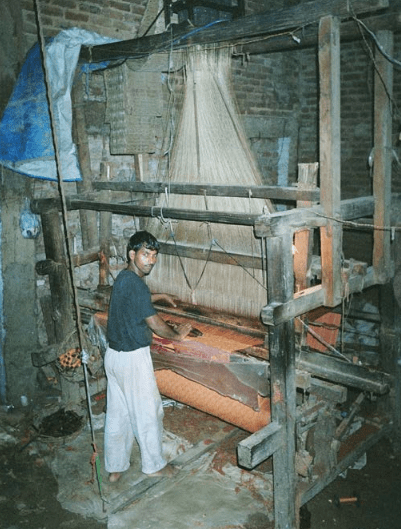 Shuttles
These are smaller wooden blocks that are pointed on both sides. They are hollow from within and contain the roll of the thread that is used for the weft or taana. They travel between the threads of the warp with the pull of the strings attached with the frame of the loom.

Instruments Used for Dyeing
For the process of dyeing, the main implements needed are mainly the dyes, a tub in which the process is carried out, and bamboo poles and strings for drying.

The Process
Since the number of products manufactured using jacquard weaving is large, there exist slight differences in the process as per product specifications. The basic process followed is explained in brief here. 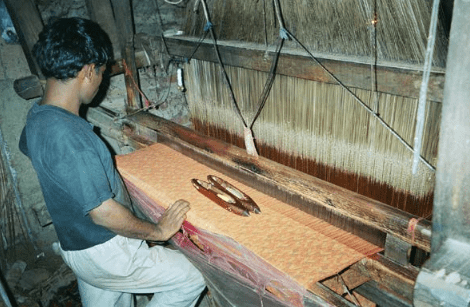 The first step is the procurement of appropriate thread. Jacquard weavers purchase thread from dealers on a wholesale basis. There are two types of threads used.

The first is the one used for the warp (taana), the lengthwise threads attached to a loom before weaving begins, and the other is for the weft (baana), the yarn that is shuttled back and forth across the warp to create a fabric. The width of weft is of 48 inches (122 cm).

The warp normally runs into around 100 m, divided into two portions of 50-51 m each. For the warp, 2/40 cotton threads are used, and for weft 2/10. These threads are purchased in the form of bundles.

For weaving 100m of cloth, four bundles of thread are required for the warp and six for the weft. The thread, which is the main raw material for the process, is readily available in the market and is supplied to loom owners at a wholesale rate. 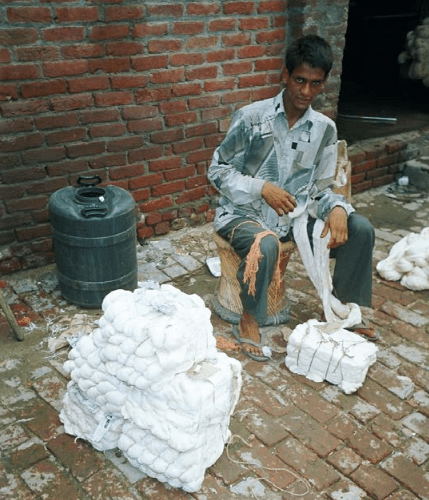 Dyeing of the Thread
Four types of dyes are normally used for coloring threads. These are, frozen dye (which fades easily and therefore is used in cheaper clothes), direct dye, wet dye (which is a more or less permanent dye) and napthol or reactive dye (which is used for red, maroon and orange colors).

The bundles of thread are first opened and then tied in the middle so that they do not get entangled during dyeing. In the meantime, water is heated in tubs 5×4×4 feet big, in which the dyes are added.

The threads are then dipped into these dyes and are kept there for a while, giving time for the dye to color the thread. After this, the bundles are taken out and are dried in the shade. If they are not properly dyed, they are again dipped in the tub. Then they are dried and ready for the next stage of the process. 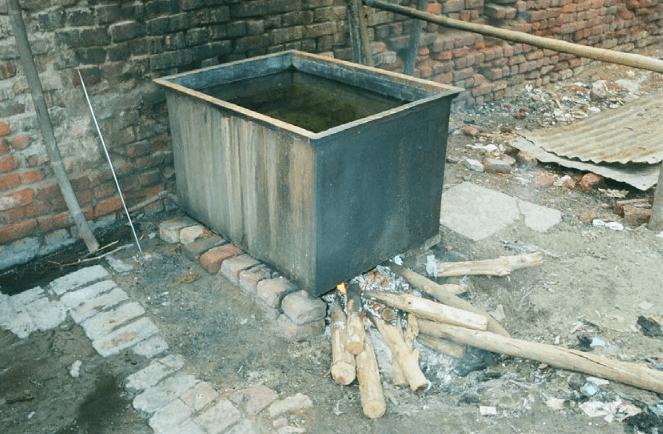 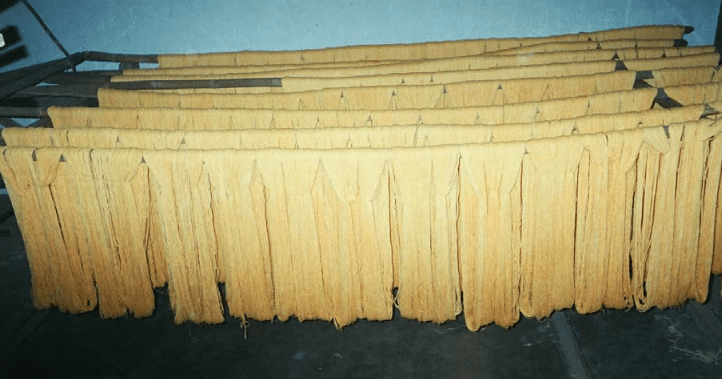 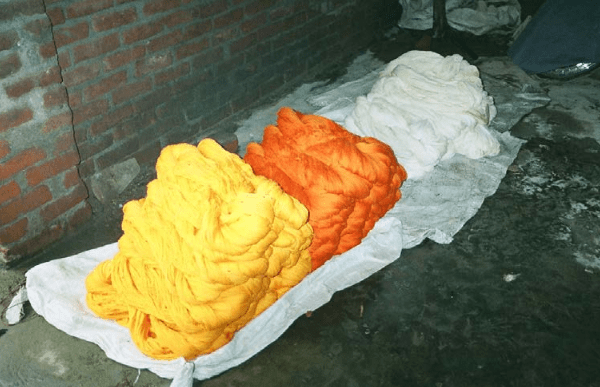 Making Rolls
Reeling is done using a charkha machine. This is normally done by the women of the household. The threads are put in the form of a roll, or gitta, as it is locally called. The charkha that is used may be a big, metallic one or the small wooden one. 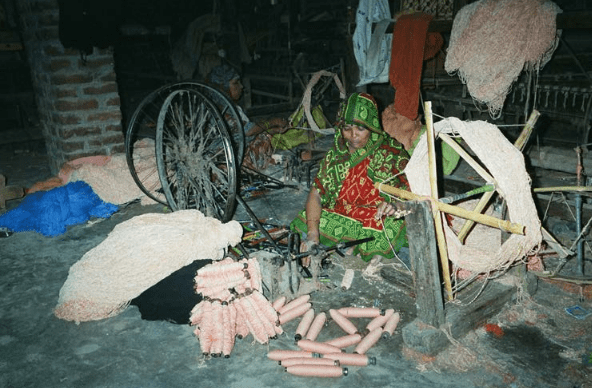 Making the Warp
The warp or taana machine is used for this. This machine is the second most expensive one (after the loom itself) in the whole process. It is used to prepare the warp by rolling the threads on a wooden log in a particular sequence of colors depending on the design.

This machine consists of two parts: one is a hollow octagonal wooden frame on which the threads are wrapped before being wound around the warp roll; and the other is a big wooden vertical frame on which the rolls of threads of different colors are put from where they can be attached to the octagonal frame.

This is a hand-driven machine and it provides the basic requirement for the loom, the warp roll. Normally, threads of three or four colors are used for preparing the taana or warp, depending on the design desired. 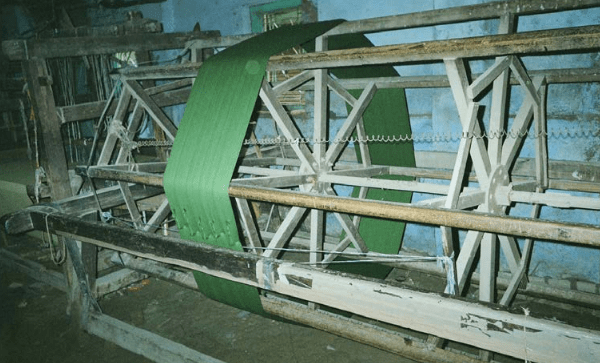 Making the Fabric
This is the most important and complicated part of the whole process. It starts from choosing the design, which may be a traditional one or supplied by an institution. The design is plotted on graph paper by plotters according to the dimensions desired.

Once the designs are plotted, they are taken to a technician who punches them on cardboards in the required sequence. These cards, linked in a chain as per the design, are then used by the jacquard machine to provide the exact sequence of the different colors of the threads that are required for the design.

The jacquard machine (which runs by a weaver moving a pedal) has a rectangular block on which the chain of punch cards runs. These cards have different patterns of holes. When the block is struck against a set of needles, it pushes the requisite hooks backwards.

The needles where the card is punched remain unaffected, while the other needles are pressed and the hooks associated are withdrawn, leaving the threads in the background. Thus, the threads in the hooks whose needle are not pressed by the cylinder due to the hole in the punch card come forward to be a part of the weft and the rest remain as they are, allowing for the complicated designs on the fabric.

The interesting part is that the designs remain the same for years as long as there is demand for them. There are looms on which the punch cards have not been changed for more than 10 years. Thus, both the plotters as well as the technician are not regulars in the jacquard loom team.

The weaving process requires great skill as the weaver has to constantly keep pedaling with his right leg to operate the jacquard machine. At the same time, he has to pull the string that controls the shuttle, which flies over the wooden sill of the loom, taking the yarn of the weft across the threads of the warp, thus progressing the process of weaving. 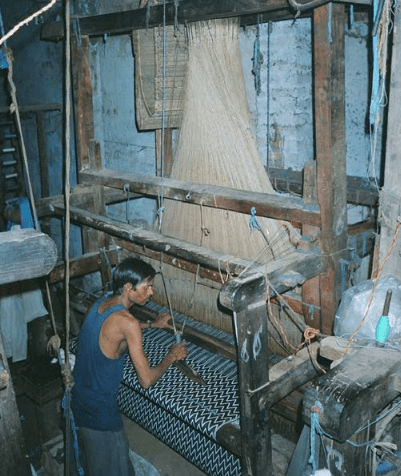 Uses of the Product
The cloth produced in jacquard looms is mainly used for tapestries, upholstery, draperies, clothes like, scarf’s and silk saris, and in preparing hand bags and many other products.