Hawa Mahal is a palace located in Jaipur, India. Built in the 17th century by the Rajput ruler, Sawai Pratap Singh, has the repute of being one of the most distinctive landmarks in India. The structure is adorned with red and pink sandstones lined with white color, making it more vibrant. This architectural marvel was the brainchild of the royal architect, Lal Chand Ustad. Sawai Pratap Singh who was an ardent Krishna devotee asked Lal Chand to build the Mahal in such a way that it honors the lord. Therefore it is structured in the shape of Krishna’s crown. The overall design of the Mahal has drawn inspiration from the Mughal and the Rajput architectural styles. The palace is maintained by the archaeological department of the Government of Rajasthan.

The red and pink sandstone monument has a unique five-storey exterior. The five-storey exterior resembles a honeycomb of the beehive with its 953 small windows called Jharokas. The intricate latticework on the windows enabled the ladies of the royal household to glance down the streets to observe the daily life and the festivities without being seen. The windows are also decorated with colored glass. The colored glass reflects the light and floods the entire chamber area with a multitude of colors. 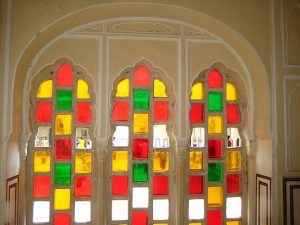 The coloured glass windows in one of the chambers. Source: Wikipedia

The palace which was built as a part of the city palace, does not house an entrance. The entry to Hawa Mahal is through an imperial door. The door opens to a courtyard that has a huge fountain in the center and surrounded by double storeyed buildings, with Hawa Mahal located on the eastern side. 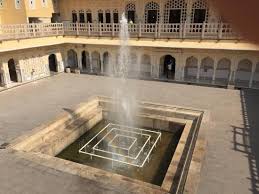 The interiors of the palace are breathtaking owing it to the unique design. They are embellished with fluted pillars, domed canopies built in the Rajput style of architecture. The intricately carved motifs and designs on the walls are a testimony to the skillful craftsmanship of the artisans of that era. The corridors are relatively cool even in the summers, due to the gentle breeze wafting through the lattice windows. Proper care should be taken while treading the corridors as they can get extremely cramped and crowded at times. The top three floors of the five-storeyed pyramidal structure have the width of a single room while the other two have patios in front of them. The palace is sans any stairs, making the ramps the only way to commute to the topmost floors. The top floors offer stunning views of Jantar Mantar, the City Palace, and the Sireh Deori Bazaar. 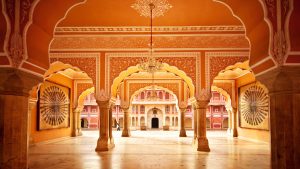 The palace houses an archaeological museum that preserves the artifacts of the Rajput era. Prominent exhibits include terracotta, antiquities, fish hooks, arrowheads, swords, helmets and the belongings of the Maharajas of Jaipur. The history lovers ought to visit the museum to get a feel of Rajput history.

Hawa Mahal with all its opulence and grandeur stands tall amidst the city of Jaipur. The visiting hours are from 9:30 AM to 4:30 PM. The entry fees are priced at Rs.50 for the domestic tourists and Rs.200 for the international tourists. It is advisable to visit Jaipur during winters as the heat becomes unbearable during summers.