Chanderi Art- Unravelling The Mystery Behind The Beauty

Home Chanderi Art- Unravelling The Mystery Behind The Beauty 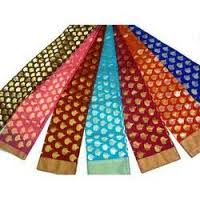 Whenever one hears the word “Chanderi”, one can only think of one thing that is the traditional “Chanderi silk”- the beautifully woven golden zari with the soothing body of cotton. But there is much more to it than just the sari. The name comes from the town of Chanderi where it originated in Madhya Pradesh.

This town is of historical importance and is spotted with several monuments of Bundela Rajputs and Malwa sultans. It is among the must -see tourist locations of India with approximately 365 of such monuments spread across the town and its borders. The recorded history of this town can be dated back to the 11th century i.e., more than two millennia which can be visibly seen in its work of art. 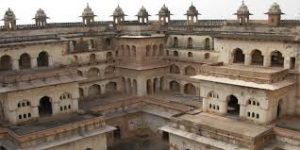 The Chanderi silk saris were preferred by the royalty or to be worn at royal occasions due to its lightweight and sheer excellence of design. Its characteristics include intricate design, feather touch, and lightweight which only adds to its luxury. It is a legend that this boon was founded by lord Krishna’s cousin, Shishupala.

Although the weaving culture began during the 2nd and 7th century, it only gained popularity by the end of the 11th century due to setting up of major trade centers around the city (Malwa, Medwa, central India, and south Gujarat). 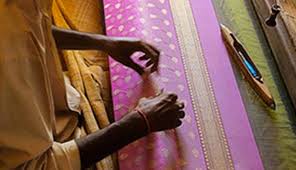 It is created by weaving the silk and zari in the traditional cotton yarn that leads its shimmering texture. Thus, the astonishing blend of cotton, zari, and silk give birth to the Chanderi fabric. Basically, it uses 3 kinds of fabric – cotton silk, pure silk, and Chanderi cotton. Various forms such as the traditional coin, geometrics, and peacock are woven to give patterns.

India has taken a premeditated initiative of protecting this culture not only at the national but at the global level for Chanderi art to be recognized as a geographic indicator. There are ample world trade organization agreements applicable to the case of Chanderi art including the section 334 of the Uruguay round agreements and intellectual property rights act. 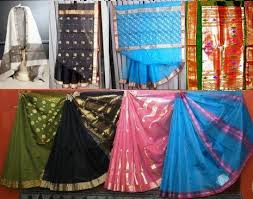 These saris can be easily spotted and found in cultural hubs of Delhi such as Delhi Haat and Chandni Chowk.

The most recent accolade for this art was during the 2010 commonwealth games where the winning athletes were presented with a Chanderi stole along with the mascot woven within the body with a golden brocade.