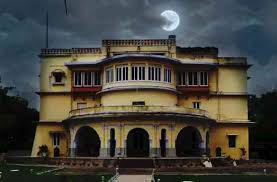 This is Brij Raj Bhawan Palace which has attracted the who’s who of Britain and India. It was originally built in 1830 to serve as the residence of British officials, and about 60 years after its inception, it was declared as the state guesthouse.

One of the modern VVIPs to visit this colonial-style mansion is the former Prime Minister of India, Mrs. Indira Gandhi.

It was the year 1857, the year of the first Indian fight for Independence. The year when for the first time Indian kings of several different regions came together to fight a common enemy, the British. Unlike the Freedom movement led by Mahatma Gandhi, the 1857 movement was a complete mutiny, a war.

Indians were fighting the British in open war and lives were lost on both sides. Amidst this war, still untouched by Mutiny was a small town in Rajasthan called Kota.

Like most of the cities in Rajasthan at that time, Kota was under complete control of English. Though there was still an Indian King in the city he was merely a puppet. The real control of the city and surrounding areas was under the British, who would leave one of their officers in Kota to control the area.

As a residence to the officer, they built a Palace here in the year 1830 and named it Brijraj Bhavan Palace. The name Brijraj itself signified the English rule, British Raj and hence the name Brijraj. Though some people believe that it was named Brijraj post-independence after the name of King Brijraj. 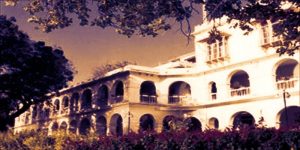 In 1857, this palace was home to a Major Charles Burton of 40th Bengal Native Infantry. He was posted in Kota in 1844 and had been living here with this family for 13 years. At the outbreak of the mutiny, Major Burton was asked by the British to travel to Neemuch, a small town in Madhya Pradesh and handle the mutiny there.

Kota at that time was completely untouched by war and thinking that there wouldn’t be a problem here, Major Burton with his family traveled to Neemuch. In December of the same year though, he received a word from the Maharaja of Kota, warning him of a possible mutiny in the city.

The letter had urged Major Burton to come back to Kota immediately and handle the situation.

British were already fighting the Indian army in several states and could not afford an outbreak in Kota as well so, in order to suppress the mutiny before it even started, Major Burton immediately started for Kota. Little did he know that he was walking straight into a trap.

Burton with his family arrived in Kota on December 13th, 1857. Two days later, on the night of 15th December, he was informed by the guard that there was a huge crowd approaching the palace. Assuming that the crowd must be the locals coming to the palace for some help or to discuss an issue, Major Burton stepped out to talk but immediately got fired upon.

Sensing the trouble, he rushed back in, took his two sons with him and hid in the upper room hoping that the guards would hold back the crowd long enough for help to arrive. Against all his hopes though, he and both his sons were soon captured by the Indian army, dragged to the central hall and shot dead kneeling down. 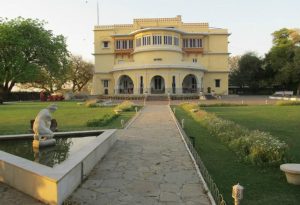 After the mutiny was suppressed, Kota was again back under the control of Britishers and Brijraj Bhavan palace started to again serve its purpose of British residence. Many people including Viceroys, Kings and Queens and Prime Ministers have resided here.

In 1903, Lord Curzon visited the palace, and in 1911, Queen Mary of England stayed here on her visit. After independence, the mansion became the private property of Maharaja of Kota but was taken over by the Indian Government in 1980 and declared as a heritage hotel.

It is believed though however that no matter who came and went this palace always remained the residence of Major Burton who never quite left even after his death. Most of the tales related to such ancient places are ghosts who would hurt people and even kill. Major Burton’s ghost, however, has always been considered as a friendly one.

If one is to believe the local tales, in his life, Major Burton was a typical army man of total discipline. During his residence, there was a complete army lifestyle at the palace and everything was systematic and in order. He did not even give an exception to his own family when it came to discipline.

It is believed that even after his death, he remained an army person at heart. The haunting related to Brijraj palace are sightings of Major Burton still roaming around with a cane in his hand and making sure that everything is in order.

Guards who were posted here at night talking about how they heard his voice warning them to stay alert. A few guards who nodded off mention getting slapped by an invisible force, waking them right up.

Even the former Maharani of Kota once told British Journalists in 1980 that she had seen Major Burton several times, in the same hall where he was killed.