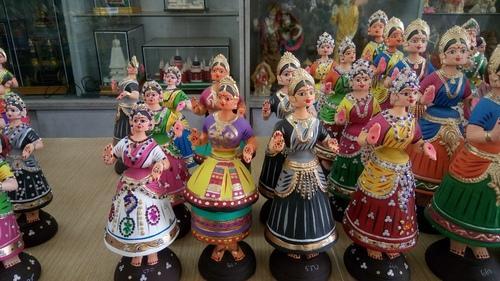 Are you looking for Thanjavur Doll – An Ancient Indian Art then check out this post to know more. India is a land of culture and agriculture and today we will be seeing the place having the same specialty of India. This piece of art and culture has not only left India amazed but has made its mark in the world.

This famous art is “Thanjavuru Doll” from the district of Thanjavur, Chennai of Tamilnadu State. It is an old Tamil art with the ancient method which uses less or no tool. It is totally hand made and can be easily glazed and painted.

The feature that makes it unique is that it is a combination of bobblehead and roly-poly doll. The bobblehead is a toy having a large head then its body. The roll poly feature is that when we hit it will return back to normal position as we see in modern plastic toys. 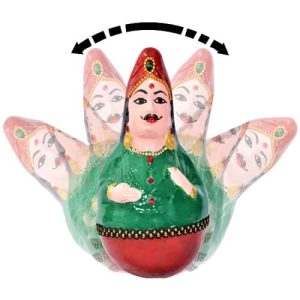 The dolls are made of terracotta material, are handmade and having detailed finishing. This doll is called as “Thanjavur thalayatti bommai” in Tamil language meaning “Thanjavur head shaking doll”. It is a unique art which amazed many foreigners and found geographical identification by the government of India in 2008.

It can be made to any shape of the doll so that it can be used in puppet plays which attract most viewers, as a part of refreshment and entertainment. The doll is self-balancing having its weight concentrated at its bottom Center which gives it rolling action too. Thus, producing continuous motion shaking its head with damped slow oscillation.

The history of this doll is as old as the 19th century from King Saboji’s Kingdom, where it was made first by the great artist of Saboji’s Kingdom. One of world-famous Thanjavur doll is at John Hopkin’s archeological museum, Baltimore, USA.

The material used for the Thanjavur Doll : 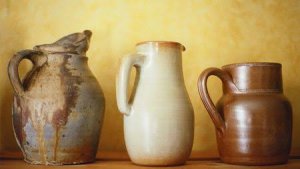 It is generally made from terracotta, which is a clay-based glazed or unglazed ceramic. The glazed ceramic is used mostly which gives a good finish, known for its lighter weight.

Terracotta is famous material for potter’s wheel, the way he makes by his hands. The specialty of this material is that it makes the process simpler and quicker at the much lower material cost.

Also, it gives a doll, the property of less tool usage and hand made with great flexibility, that is it is handmade. Apart from terracotta it also uses marble, alabaster, clay, plaster of Paris, cement, wax. Nowadays it also made from plastic as well. 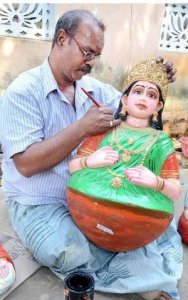 Though we have modern technology automatic toys traditional art has its own specialty and importance. The Thanjavur doll now is available easily all over the world online and offline with minimum cost starting from 500rs.

Thus, we have many modern multifunctional toys with the greatest technology but traditional toys depict arts and skills. So it is our duty to preserve and promote Indian ancient culture because our culture is our pride.