A Palate Guide To The Colours Of Punjab!

Home A Palate Guide To The Colours Of Punjab! 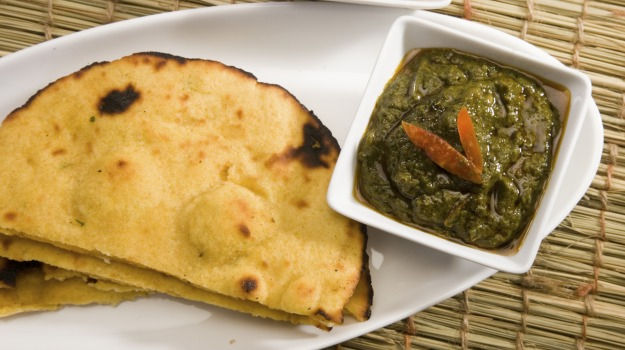 Nowadays, Food blogging has become quite common. Taking pictures of what one had throughout the day and uploading it in the social media is quite in the trend.But amidst all this chaos here is a simple guide for a smooth cruise through the palate popping Punjabi cuisine.

Punjabi cuisine basically belongs to the northern region of India, mainly constituting Delhi and the Punjab region. It is known for its extra zing of taste when it comes to spices and oil. It is one of the most popular and distinct Indian cuisines and inculcates the flavors of India and Pakistan. Also known as the “Granary of India” or “India’s bread basket”, the main ingredients include wheat, paddy, millet, rice thus keeping carbs as the hero of the dish. Grains along with dairy products form an integral part of the diet. 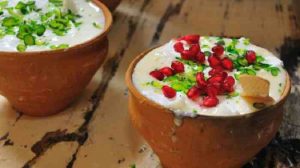 It involves usage of butter, clarified butter, sunflower oil, ghee as a fat source. Traditional Indian spices are grounded in Ghotna, a conventional kitchen device used to grind and crush the spices. Kasoori methi or dried fenugreek leaves, onion, garlic, and ginger are used extensively among spices and condiments. 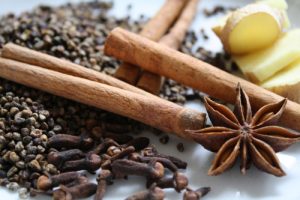 Colouring agents like Zarda among other spices like cumin, coriander, dried methi leaves and black pepper are used to enhance the taste and flavor of various dishes. Fermented foods like pickles are also used to prepare many Punjabi dishes. One of the famous ones is Achari Gosht(pickled meat) made of chicken and pickles. Pickles, especially the ones made out of mango compliment many Punjabi dishes like stuffed paranthas as a side dish. 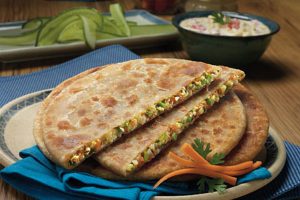 Many traditional preparation styles are practiced among the villagers still using some of the standard cooking methods like the Punjabi Bhatti which is comparable to a masonry oven. The conventional stoves and ovens in Punjab are called Chulha and Bharolli respectively and it is common to find ovens called Band chulha and Wadda chulha in Punjabi households.  A variant of such cooking style that has become extremely popular and is used widely is the tandoori style that involves preparing various dishes in a clay oven called tandoor. 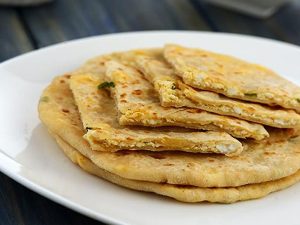 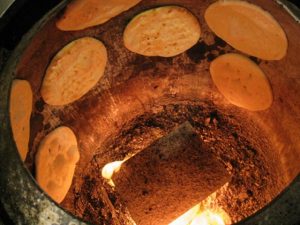 Some of the common choices are Parantha (thick flatbread fried with ghee or oil), stuffed paranthas (like Aloo Paratha stuffed with boiled, mashed, and spiced potatoes and Gobi Parantha stuffed with finely grated, and spiced cauliflower) are enjoyed as breakfast foods that can be served with white butter, mango pickle or curd. Halwa Puri consisting of puri (bread that is roundish bread deep fried served with a sweet dish called halwa) is also taken as breakfast. It can include chana masala, a variety of chickpea lusciously prepared with onion, tomatoes, garlic, chili, ginger and hot spices. Chana Masala can also be savored with fluffy, deep-fried leavened, and fermented bread called Bhatura or with Amritsari Kulchas, another variant of leavened bread. Items like Dahi Bhalla, fried flour balls soaked in sweetened and beaten yogurt and seasoned with different spices among others are also included in breakfast. 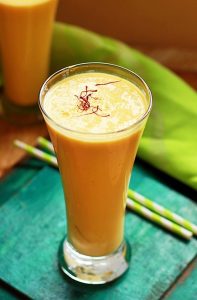 The most popular dairy-based beverages involve (buttermilk) Chaanch, Falooda, Amritsari Lassi, Mango Lassi, Mango Milkshake and Doodh Soda among others. Others include Shikanji, Imli ka Paani (Tamarind Juice), Nimbu Paani (Lemon Juice) and Jal-Jeera. Other than these, Tea and Masala chai(spiced tea) are also savored as beverages in this region. 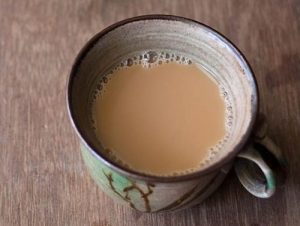