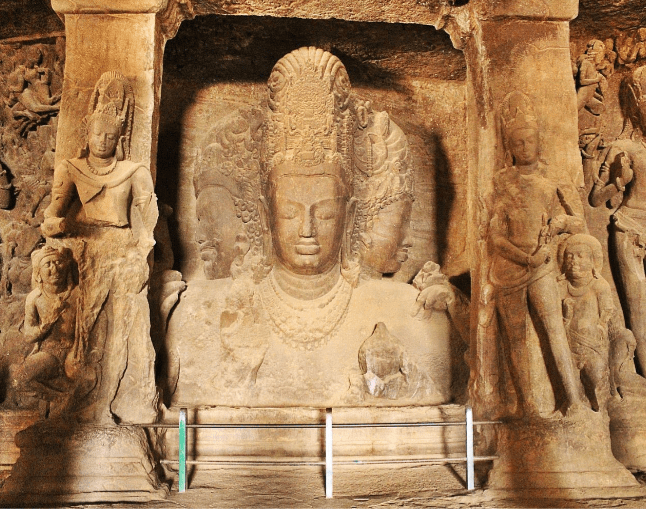 The Elephanta Caves is also called Gharapurichi Leni. It is located on Elephanta Island in Mumbai, (Maharashtra). The vast cave temple complex area is near about 60000 sq ft and boasts of the central chamber, two lateral ones, with many subsidiary shrines, gardens and courtyards. Also, there are three passages to the temple complex to pass by. The entire location of Elephanta is built from solid natural rock with intricately carved and designed sculptures of idols. The sculpturing done is auspicious. When I myself saw it for the first time…I was amazed!!!!

The cave temple is dedicated to Lord Shiva and was excavated sometime in the 8th century by the Rashtrakuta kings and the design is totally based on Hindu and Buddhist religion iconography. One can investigate the real excellence of ancient Indian architecture of Elephanta caves which is formerly based on the principle of seven caves. In simple words, the Elephanta Caves is a conglomeration of seven caves, out of which the most important and famous is the Mahesa-murti cave. Also, there are a few highly-finished rock surfaces in Elephanta Caves which you can probably notice. However, some are stark untreated rocks too. The entrance of Elephanta caves The most prominent expression of sculpted caves can be noticed in the two major groups of caves here. 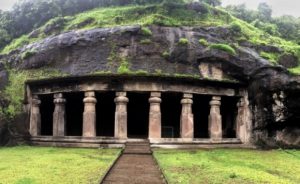 The first cave represents engravings based on Hinduism, where we can find rock-cut stone sculptures, dedicated to Lord Shiva. On the sculpture, we can see the quintessential essence of the Shiva Lingam created in eight manifest forms that are worth viewing. It looks really attractive. Further, when we move to other smaller caves, we can witness that it’s an example of the Buddhistic rock-cut architecture. So, visiting this site is not about seeing the architectural marvel and aesthetic beauty of Elephanta but also it’s our way to know Indian culture more deeply.

Elephanta Caves were assigned as a UNESCO World Heritage Site in the year 1987. Thus, it is a notable site visited by many tourists especially foreigners during their trip to Mumbai to explore the historical and spiritual marvels here. Also, every February, the Maharashtra Tourism Development Corporation (MTDC) hosts/ organizes a fantastic dance festival at Elephanta Island and people from all over the world visit this place to enjoy the dance. 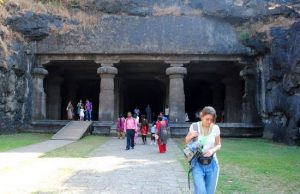 As you all may be knowing, the Elephanta caves on the island are believed to date back to the Silhara Kings era. However, there are no such scientific proves to confirm the same; still, there are several assumptions associated with its formation and the research is still going on by historians. Actually, the Portuguese who reached India renamed the island Elephanta.

The Elephanta caves are believed to come under the administrations of a myriad of rulers like the Rashtrakutas and British, also the Portuguese that controlled this area for many centuries till the modern era. These rulers are the Mauryas of Konkan, Chalukyas of Badami, Silaharas, Trikutakas, Rashtrakutas, Yadavas of Devagiri, the Portuguese, and even the British dynasty. Additionally, as per the local tradition, some people believe that the artisans/ sculptors created the Elephanta caves without at all using their hands. 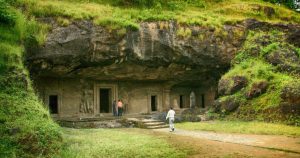 The architecture of Elephanta Caves:

Elephanta Caves are the epitome of Indian architecture depicting the deep-rooted Indian mythology in its every corner dedicated to many gods and goddesses of ancient history. The main cave at Elephanta caves holds an image of Ravana raising Kailash mountain as he was one of the famous devotees of Lord Shiva. Further, at Ardhanarishvara, you can see a display of Shiva and Parvati within the same body which looks as if it’s live.

When you go to the end you get to see the Sadashiva display of carved Shiva which is bear around a 20 ft high marvel of the three-headed Shiva, famously known as Trimurti meaning three-headed – a classic example of Indian art. I bet you this location of Elephanta caves will grab your attention as soon as you enter the temple.