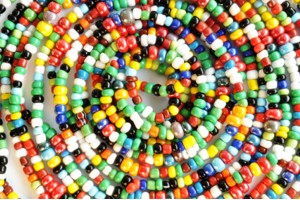 In the tribal areas of Akirajpur, Jhabua and Dahod districts, you would often find young girls fiddling with the glass beads and threads, trying to make a pattern out of it because in these areas the worth of a woman is determined by how well she can do the bead work. These traditions are passed through the generations and the designs are usually an inspiration from the tribal art. The people have been able to preserve this art of theirs while they still obtain their livelihood from the deciduous forests surrounding them. Thousands of years ago these beads were considered very precious and were transported to various places initially as decorative items but later these beads found use in making of ornaments, table runners and such accessories. The beads were also used as a currency for a while but later were abandoned because of the difference in choice of style, color, and type of beads.

When a woman sits down to make the bead ornaments she needs to sort them according to their color by unwinding the sling of thread in a loop around her toe and picking each thread one by one. One needs to use the thread and bead of the same color as certain colors are work specifically on certain occasions such as white for marriages and green for engagements. These necklaces are recognized in terms of the number of threads used to make them. The patterns are inspired from the natural surroundings and are termed as ‘Phulki’, ‘Pati’, etc. The designs are not sketched or graphed but are verbally decided which leads them to being unique and are passed on in the generations. After completing the design the women shows it around the community and is praised for the same. This art is more like a meditation of these women as they get really engrossed in their work which in turn brings them peace.