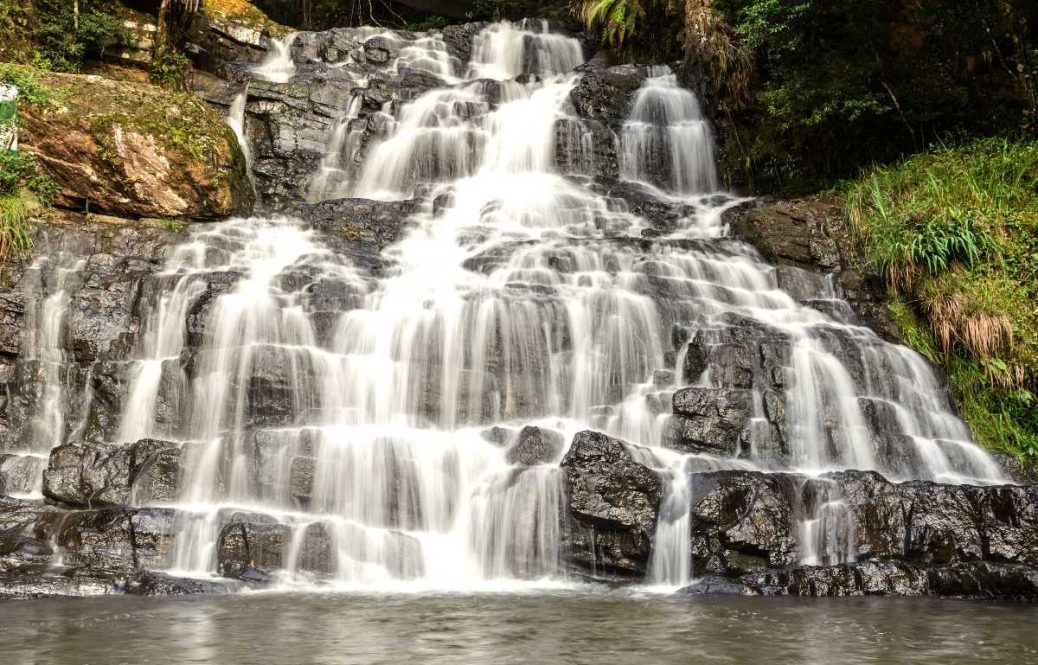 India is home for a large number of enchanting waterfalls and each of them has it’s own showpiece. Many of the waterfalls go unnoticed and one of them is the Elephant Falls, Shillong, Meghalaya, India. Elephant falls is what the British called it after the elephant-like stone at its foot which was destroyed in 1987 by a devastating earthquake.

It is popularly called as Ka Kshaid Lai Pateng Khohsiew (or “Three Steps Waterfalls”) by the local Khasi people because the falls consists of three parts in succession. The falls is an extraordinary place to spend some quality time amidst nature and can be reached by walk with a lot of paved stairs and bridges traversing the stream between the second and the third falls.

The first waterfall is tucked between dense forests and is very broad. The second falls is very thin and almost negligible during the winters due to the cold and decreasing water levels. The third waterfall is a treat for the eyes.

It is the most clear and tall with a sheer vertical drop of water like a thick sheet of milk on rocky background. The sides of the waterfalls is surrounded by lush greenery and ferns which adds to it’s allure.

This captivating waterfall is situated on the outskirts of the capital of Meghalaya which is Shillong in the East Khasi Hills District, Upper Shillong and almost twelve kilometers from the center.

A small signboard quite near the Shillong Peak, marks a small road that turns off to the edge of the mountain. This road leads to the falls. From the gate, there is a steep, slippery flight of stairs to navigate each level of the fall with the first and second level facilitated with benches to rest and relax. A ticket costing rupees 20 is issued to view this appealing cascade.

This falls can be visited all year around but, every place in Meghalaya looks like a waterfall in the monsoon so in this perspective, Elephant falls looks nothing much extraordinary. Summertime remains to be the best time to visit it.

But it is very accessible with not much hike to see the falls which can be viewed from close and it’s beauty entirely admired. You can enjoy local delicacies in the nearby stalls selling beverages, buttered corn, momos and souvenirs. You can also get pictures clicked dressed up as the local Khasi people. The beguiling “three-step waterfall” remains to be a must-visit place in India.