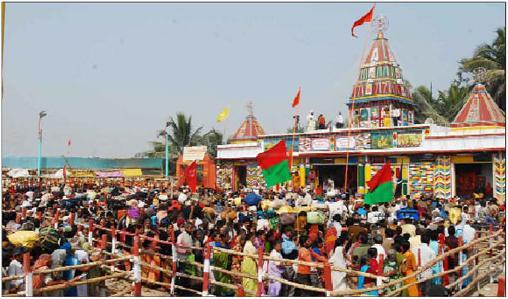 Odisha, the beautiful state located in the eastern coast of India is a hub of large number of cultures, traditions and festivals. The Car Festival of Puri is famous worldwide. The second-largest festival is the Chandrabhaga Mela or the Magha Saptami Festival which is usually being observed on the seventh day of the new moon of Magha month and normally lies in February.

Although the temple is devastated, thousands of devotees flock to Konark to commemorate the new birth of Surya Dev or the Sun God.

The reason for the state of the temple is still unknown and remains to be a huge puzzle to historians and archaeologists. But according to the copper plates and the references made on the Ain-i-Akbari states that the temple was in good condition until the 16th century.

Visitors and pilgrims can find several beautifully sculpted and carved idols of a sun god, Maya Devi temple, wheels, horses, and Lord Narasimha. They will also find a plate declaring Konark to be a world Heritage site. The sight along the Chandrabhaga river on the day of the Magha Sukla Saptami attracts the attention of tourists and pilgrims equally.

The festival has an astonishing history. A mythical anecdote tells that Samba, the son of Lord Krishna was cursed by his father upon intruding his room during a private moment. Lord Krishna imprecated Samba of leprosy which was a huge punishment for an unintended mistake.

Upon Narad’s suggestion, Samba worshiped Surya Deva upon the banks of Chandrabhaga river for 12 days for a cure and he eventually was. This place is still known to have curative powers and people from all over come to seek for it.

The devotees wake up early and take a dip in the Chandrabhaga river and wait for the sun to rise and ask for his blessings. After the darshan, people usually go to the Sun Temple of Konark and spend some wonderful time with their families and friends. Odisha is sometimes known as the tribal state and several local tribes try to sell their handmade products in the Chandrabhaga fair.

Tourists also enjoy the cultural festivals happening during the day. Folk singers, Odissi dancers, and other music exponents will showcase their talents during this day and keep the audience happy.

The Pandas (priests) gather on the beach and draw an outline of the Jagannath temple on the sand and place mounds of wet sand, each mound representing a family. The pandas perform the Puja by chanting mantras.

To witness this holy and beautiful festival, reach Chandrabhag beach from Puri which is 31 kilometers away. It is such an overwhelming scene to watch people from different wakes of life reaching to pray the mighty Surya Dev with a pure heart filled with devotion.