Kailpodh: The festival of weapons and harvest

Home 2019 November 29 Kailpodh: The festival of weapons and harvest 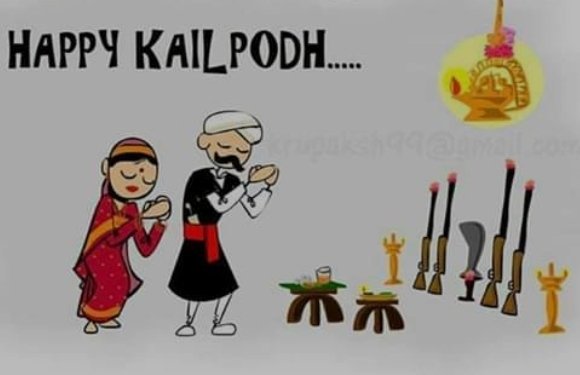 Are you looking for Kailpodh: The festival of weapons and harvest then check out this post to know more. Located amidst imposing mountains in Karnataka with a perpetually misty landscape, popular coffee producing hill station Coorg is considered to be the Scotland of India. Along with the natural and scenic beauty, Coorg, also known as Kodagu district of the Karnataka, is the place of rich culture and heritage.

The Kodavu tribe of Coorg is a very headstrong and well-skilled group of people. The origin of the Kodavu people is a little mysterious. From descendants of Greek soldiers who came with Alexander the Great to descendants of a certain race that entered Indus valley during the Mohenjo-Daro period, the tales go beyond the Indian subcontinent.

The Kodavu people contain the majority of t9he districts’ demography. Very fervently they celebrate their culture. They mainly celebrate two festivals, Putthari, the harvest festival and Kailpodh, the armory and weapon festival. As a part of any culture, the festivities and the celebrations are considered to be the occasions where everyone comes together and share happiness. Kailpodh also celebrates this togetherness. 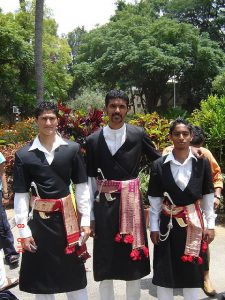 Generally, on the 3rd of September, Kailpodh is observed at the homes of the Kodavu people. It begins on the 18th day after the sun enters the Simha Raasi (the western sign of Leo). The word Kailpodh means a festival of Armory or weapons. Kail means Armory/weapon and Podh means festivals.

The whole festival is about the completion of the transplantation of crops and the celebration that follows the hard work behind the completion of the task. They place their traditional weapons like guns, swords, knives, spears, bows, and arrows in the prayer room near the hanging prayer lamp (thookbolcha) after carefully cleaning them.

They decorate the weapons with flowers. They pray and make offerings to the Kodava deities, the river deity (Kaveramma), the chief preceptor (Mahaguru Igguthappa) and the supreme ancestor (Guru Karana), asking for the well-being of their crops and to give them the strength to protect it from wild animals. This is the significance of Kailpodh.

The woman of the household prepares the Kodava cuisine for this specific occasion. The traditional food prepared on this occasion is rice and meat dishes. Along with these the other dishes prepared are, steamed dough balls called kadambuttu, voti, paaputt plain cakes, and nooputt noodles, along with meat dishes such as Pandi (pork), Koli (chicken) and Yerchi (mutton) curry as well as desserts like akki payasa (rice kheer) are also cooked and served. 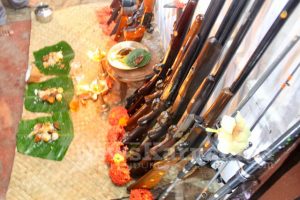 During the festival, the Kodavu people perform folk dances, play sports, and organize other cultural events. In the past Kodavu people used to go for hunting sports which now changed to the testing of shooting skills, physical sports etc. They get ready for the festival wearing their traditional dress. All of these celebrations happen in the Mund or the open ground in the villages.

The Kodavu tribe is mainly a warrior tribe. They greatly respect and maintain the weapons of their ancestors. These weapons are handed down from generation to generation. The Kodavas worshipped weapons to keep their martial traditions alive amongst their younger generations. This festival allows them to carry this tradition forward and teach the young generations about their rich culture and history as well as the traditions of the tribe.