The word ‘Bhil’ is derived from Bil or vil which means Bow and have therefore come to be known as the mountains with a bow and arrow. They constitute about 39% of the population and are also considered to be one of the largest tribal populations found in Rajasthan.

Bhils are also known as bowmen of Rajasthan or the tribals of Mewar or the Arches. Bhil tribe is divided into two groups, the Central or pure Bhils found in the mountainous regions of Madhya Pradesh, Gujarat, Maharashtra, and Rajasthan. 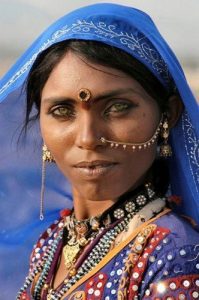 In the history of Rajasthan, Bhil people are depicted as important warriors and many Rajput rulers showed faith in them, including instances during battles with Marathas and Mughals. Bhils religious practices differ from place to place.

They worship local deities like Khandoba, Khanoba, Bahiroba and many more. They worship Tiger God called ‘Vaghdev.’ Bhils don’t have temples on their own and consult Badvas – the hereditary sorcerers.  Dance and music are given importance by Bhils due to their rich cultural history.

The famous songs among the Bhils are Ghoomar and Gair which is the religious dance and drama performed. They are also talented in sculpture work and make beautiful horses, elephants, tigers, and deities out of clay. 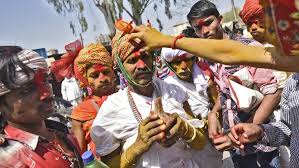 Bhils are tall, well built with very attractive personality and also are known as Truthfulness and simplicity. They were brass ornaments and high metal jewelry and in fact have weapons is made of bamboo and is used for hunting. And also today, they practice agriculture as a means of livelihood.