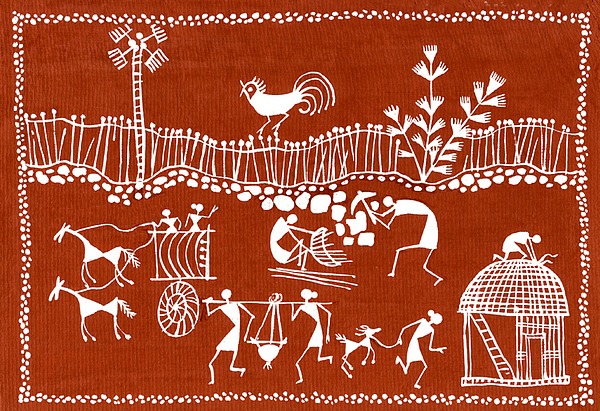 Are you looking for Warli Tribal Art? then to check out this post. One of the oldest forms of art in history is Warli Paintings. This form of tribal art was originated in the state of Maharashtra in India. Even though the form of art has not received any special recognition outside India, it is a very famous form of art among the tribal communities.

Not much is known about the origin of this art, even though researchers have found pieces of evidence that suggest that this art form dates back to the 10th century, and has been in practice since then. Even though there are many restrictions in form of geographical boundaries and technological advancements, the tribal community has preserved the Warli art till date. 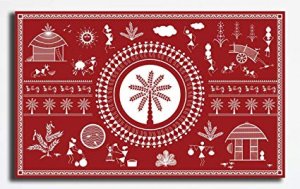 The style of Warli painting was not recognised until the 1970s

These paintings were originally found on the walls of the caves that were hidden in the forest where the tribal communities used to reside. The first among these paintings were discovered in the Sahyadri Hills Range, Western Ghats, India.

Sahyadri was believed to be the place of origin for the Warli Art. Nowadays, Warli art can be found encrypted on the floors and walls of huts, where the Adivasi tribal community resides.

To do this form of painting, one requires both special skills and resources. To perform this art, first, the area of the art is coated with a mix. This mix usually made by mixing clay, cow dung and water thoroughly and with the help of a cloth, the surface is made workable with this mix. 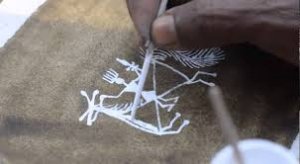 The drawings are generally made using fingers, some communities also use bamboo sticks as brushes to perform this art. The tribal people chew one end of the stick to imitate a paintbrush and then dip that end in the rice paste to use it to create drawings. The process of painting is definitely a tad bit unusual but the outcome is very eye-pleasing.