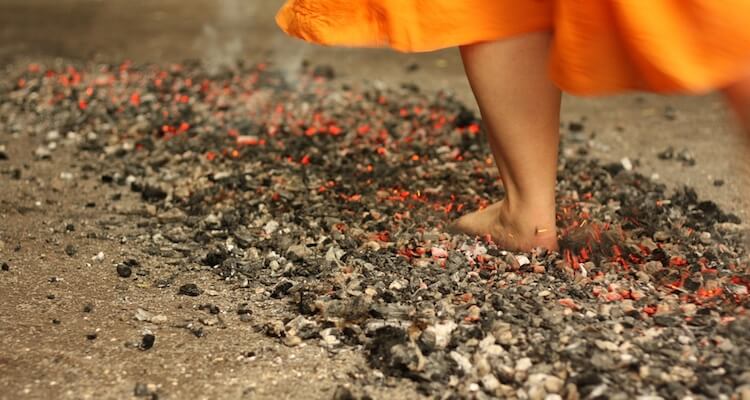 This international Hindu festival is celebrated by Tamilian populations in Malaysia, Singapore, Sri Lanka and Mauritius, usually takes place in the month of Aipasi (or Aippasi) of the Tamil calendar (or October and November according to the Gregorian calendar).

Known to be a festival that celebrates Draupadi Amman (an incarnation of Mariamman), the festival is centered around the story of Draupadi (the wife of the Pandavas) and her path to proving her fidelity and devotion by walking through fire after being humiliated by the Kauravas.

However, if one journey to the rural parts of Tamil Nadu, the festival is completely centered around the pre-Vedic goddess Mariamman, considered by many to be an incarnation of goddess Kali. Mariamman (mari-rain; amman- mother) is known to be the goddess of rain, prosperity and for the prevention of epidemics like smallpox.

The temples of this deity were non-Brahmanical and rituals of body piercings were common. The origin of the popularity of this deity is very disputed since many myths exist but largely contained to the concept of mother worship. 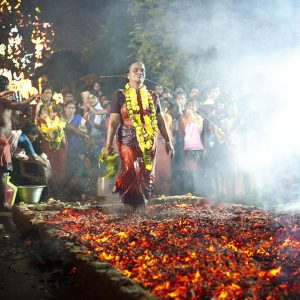 The beauty of this festival is how it culminates the older and newer rituals to create a celebration that garners many.

Plays from the Mahabharat are performed during the two weeks prior to the festival, there is a symbolic marriage event of Arjuna and Draupadi along with the older rituals of using neem leaves (used for healing epidemics like smallpox) and wearing yellow clothes to denote prosperity for the rain to bring successful harvests.

The path which one has to walk on is made by digging a large pit and burning sandalwood (which has religious significance in the region) for hours to reduce it to burning embers.

The ritual of walking on fire is common for both interpretations of the deity, bringing together the old and the new. Whichever interpretation one follows, whichever section of the population or belief one comes from, it all comes down to the fiery path of the festival Thimithi.