The Fascinating Phad Paintings of the Royal Rajasthan

When it’s Rajasthan, there’s royalness. No doubt, their culture is unique in itself in myriad aspects. One of those unique features is their glorious Phad paintings…

What are these Phad paintings?

Phad paintings are folk paintings done on scrolls. These scrolls are used made up of canvas or simply a piece of cloth. These scrolls were folded to store them, and phad is actually derived from here. Locals there call “fold” as “phad” and hence the name. Originally, vegetable colours were used to paint these. 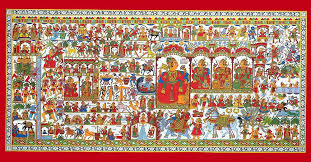 A Phad Painting on a scroll.

History of these paintings

This art form was traditionally practised by some families for more than a century. The Joshi family is well known for its phad paintings. Some of the notable members of the huge heritage include Nand kishor Joshi, Shree lal Joshi, Prakah Joshi, and Ghanshyam Joshi. These paintings were traditionally classified into two major types- Pabuji ki phad [Pabuji’s scroll painting] and Devnarayanji ki phad [Devnarayan’s scroll paintings]; the former being about 15 feet and the later, 30 feet long, which is as double as the first ones. Devnarayan is believed to be a reincarnation of Lord Vishnu, the Preserver of the world, according to the Hindu mythology, whereas Pabuji, was a local hero.

These paintings are mostly created by a religious perspective; many of these paintings’ inspirations were from the old texts. These works often depict scenes from these ancient texts, for example, The Bhagavad Gita, Hanuman Chalisa, Ramcharitmanas, Gita Govind, etc. 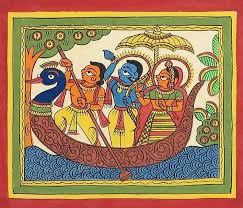 These scrolls were so handy for another beautiful form of entertainment – storytelling. Phad paintings were apt for this, as the mythological tales includes pictures of deities, all carefully and artistically hand painted on the canvas.

How did these paintings begin an integral part of people’s lives?

Well, if you’re thinking these paintings were probably used as merely just wall hangings, you’re wrong! These paintings have carved their way into many more forms for decor. Like, for example, there are trays designed by these elaborate paintings.

Phad paintings have also paved their way into wall paintings of modern architecture. No doubt they look as unique and traditional as they were on the scroll version. They give the rooms an aesthetic feel. 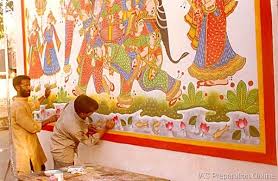 Phad painting being done on a wall

Finally, saying that these Phad paintings still manage to give you a glimpse of the unique culture of Rajasthan, even after centuries, would truly do justice to the aura and glory of these works.