Manipur’s Yaosang festival: The Holi of the Northeast

Home 2019 June 19 Manipur’s Yaosang festival: The Holi of the Northeast 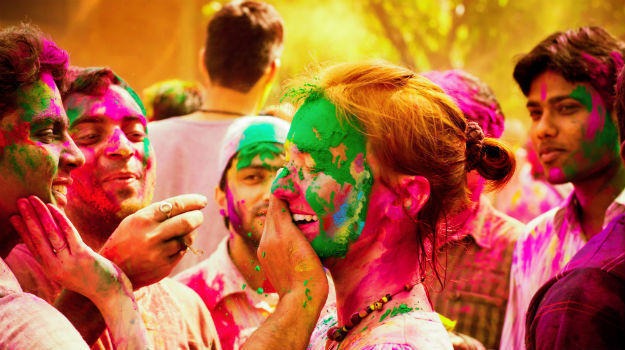 Are you looking for Manipur’s Yaosang festival? then to check out this post. There is possibly no such person who hates the festival of colours.

But do you know that a similar festival is celebrated by the Meitei people of Manipur? Yaosang, just like Holi, commences in the spring season and is considered as an important festival of Manipur. Let’s dive into this tradition whose spirit is as exuberant as the festival itself…

What is the Yaosang festival ?

Precisely, Yaosang commences on the full moon day of what the locals call as the month of ‘Lamda’. This falls around the February and March months of the Gregorian calendar. Yaosang is a five-day festival. It is a colourful festival, and a lot of merrymaking is done during these exiting days. 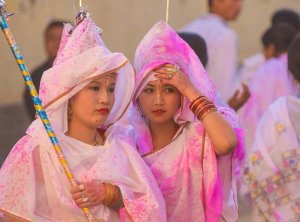 How is it celebrated?

On the first day after the sunset, Yaosang Mei Thaba i.e. burning of the Straw Hut takes place. In Manipur, Holi literally means “burning”, and thus this ritual resonates with it.

Then children, especially girls venture out on the streets for their “Nakatheng”, where they ask for money to their relatives or sometimes even strangers. They often block roads for this purpose with ropes! They take a lot of delight in this activity. The money they collected is usually spent for merrymaking. 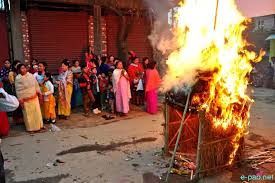 Mei Thaba or ‘the burning of the straw hut’.

The highlight celebration of this festival is the “Thabal Chongba”. Thabal means ‘moonlight’ and chongba means ‘dance’, so it literally translates to “ Dancing in Moonlight” or “Moonlight Dance” for short.

This is also the most beautiful part of the festival. The males and females dance in circles, holding their hands together. It is a joyous scene to witness during this festival.

They even wear a typical costume for the ritual. The males drape themselves in a pheijom which is similar to a dhoti. The females look beautiful, cladded in their phaneks. For the music, they traditionally use a dholakar drum. 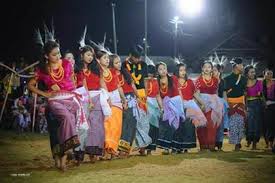 People dancing during the spectacular event of Thabal Chongba or ‘moonlight dance’.

Apart from being similar to the festival of colours, Yaosang is actually also known as the festival of sport. Many games like the lemon spoon race, mathematical race, and even soccer accentuate the spirit of this festival. 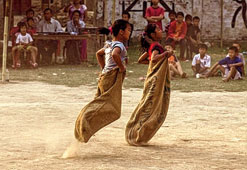 Children racing during a sport event.

Finally, on the fourth and fifth days, all the streets are filled with the young and the old, splashing coloured water on each other and having a great time.

Children, with their water pistons (pichkaris) filled with water, chasing their friends to celebrate this holi, the ladies dancing to their hearts content with their friends, and the males having a gala time with the gulaal ( coloured powder), Yaosang’s final days are truly a sight to behold.