Bonalu is the Hindu festival, in which the goddess Mahakali is prayed. It is an annual festival of state “Telangana”, whereas the ceremony will take place in Hyderabad, Secunderabad, Warangal, and other parts of the State. Bonalu is the State festival of Telangana.

In the month of July/August, every year the Celebration of Bonalu festival begins. It marks the beginning of Ashada Masam. Exclusive poojas are practiced for goddess Yellamma during the first and last day of the festival. 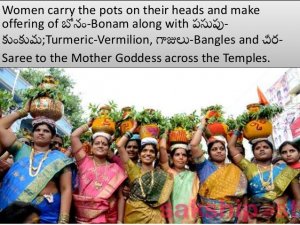 Festival Of Telangana BonaluThe origin of this Bonalu festival traces back to the 17th Century and is connected with the “Regimental Bazaar” and the twin cities of Hyderabad and Secunderabad.

In the year 1833, severe plague disease bust out in the 2 cities, and this took away the lives of many people. The Plague started becoming dangerous then originated the belief that the Plague was a curse by the Mother Goddess – Mahakali and she was riled(angered) at the locals.

It is considered that Mahakali destroys the disease (illness) and then, the locals returned to the city & installed an idol of the goddess Mahakali, which was followed by the gift of Bonalu to her.

Hence, from then, this had turned out to be a culture, which is still being pursued by all the people belonging to Telangana. People started offering their prayers and food (Bhojanalu- Bonalu) to please the goddess so she would rid them of the disease and illness.

The Role of Food in Festival Of Telangana Bonalu

Food plays a leading part in the festival. From the snacks sold on the road in the form of Prasadam to the animals sacrificed to the goddess which are later enjoyed by the families as a nonvegetarian meal. It is a celebration of acknowledgment and food for the Telangana locals. 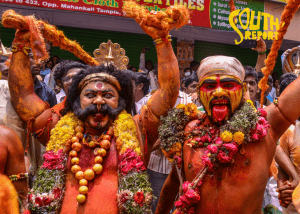 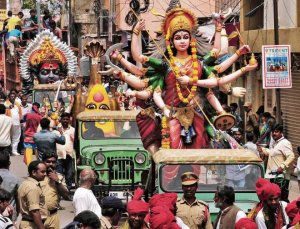 Here is the list of dates of the Bonalu festival

This festival is celebrated every year by the people of Telangana it is a very important regional festival celebrated by thousands of local people. Roads are full of devotes of Mahakali. There are lots of people who come from around the world to see this celebration. This festival ensures the safety of locals by any type of plague, disease, etc.