Handloom sector plays a key role the economic development of the state providing employment to the more than 240 lakhs handloom weavers in Telangana. It is the one of the oldest profession in India, state Handloom weavers in are divided into independent weavers, master weavers labor weavers and working under middle man being important states in the handloom industry. There is a large number of weavers who shows their different skills and create beautiful clothes, design, and pattern. 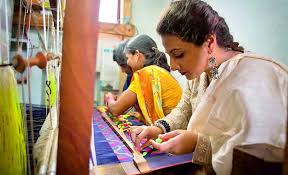 There are five kinds of the weaver who is responsible for various designs and varieties they create. first independent weaver, totally independent of any outside agency. they purchase yarn in small installments, sells his cloth to the same people or to the customers directly. The master weaver is similar to the independent weaver in many respects except that he employs outside labor of weaving for him.There are some weavers working under master weavers or dealers and they are technically skilled and independent with their own houses and looms, called middle worker weavers. A weaver, who becomes a member of a co-operative society, obtains yarn directly from the society are Co-Operative Weavers. The weavers who work under master weavers are called Labour weavers.

The cloth varieties produced by these wavers are: 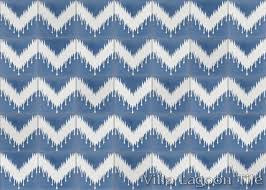 Ikat: Ikat, the technique by which the warp or weft or both can be tie-dyed in such a way, that when woven, the ‘programmed’ pattern appears in the finished fabric. To reserve
areas of the warp or weft or both, before the process of weaving with tied threads, and then to dye the yarn, is a more interesting process that requires greater skill. And this seems to be more closely aligned to processes of tie-resist and warp-resist after weaving, than to the application of impression of a resist to the surface of a fabric. 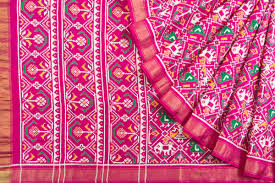 SARI: The Indian popular wear called ‘saree’ or ‘sari’ has been in existence for more than 5000 years, which is mentioned in the Vedas. The length of the fabric is 6 yards or 5 meters long. This is a one piece of clothing which fits all either fat or thin, short or tall. The traditional 6-yard sari allows for generous pleating and draping around the body and over the shoulders giving much comfort.

Cotton and Durries: The Durries making industry gained dominance in
the recent past. Tie and Dye, interlock, Jacquard etc. are some of the commonly used designs in demand in both domestic markets as well as export market. Lahari. Sitammajada. Mogga, Diamond Fish, Kamal, Dilkush.etc, are some of the popular designs. Kalamkan block prints on plain woven Durries have gained importance in the market in recent times. 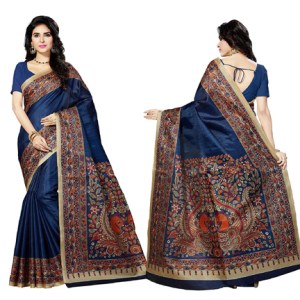 Whatever be the designs and varieties but these beautiful designs will always be in fashion and in demand. Being the important industry in Telangana There are about 82,435
handloom weaver’s co-operative fold and 158902 in outside co-operative fold. There is about 48,967 power looms working in the state. As a result, it has given employment to this state and apparels to others.