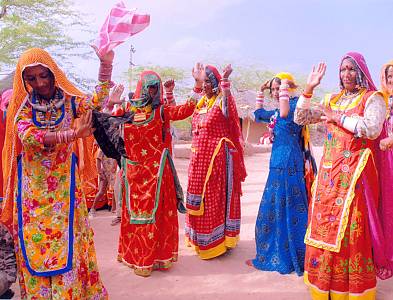 Loor dance is one of the popular traditional folk dances of the northern Indian state of Haryana. ‘Loor’ means girl in some parts of Haryana. Like any other folk dance, it is also a medium for the local people to express joy and sorrow. 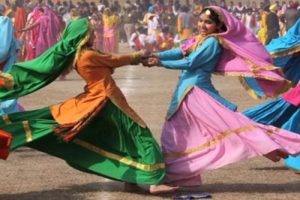 As the name suggests the dance is performed by the girls.They stand in two rows facing each other in the form of a semicircle. The songs to which they dance is in question answer format. The dance and songs depict events in the life of a girl– first, the girl child is born. Later her marriage is set and marriage discussions are held. Wedding gifts are exchanged between the girl’s family and boy’s family and the marriage is solemnized. The girl finally moves out with the boy after being married to him leaving her family behind.

Sentiments run high during this time for both the girl and her family. Later the husband joins the army and moves out, leaving his wife behind. He is not expected to return soon.The girl misses her husband dearly and becomes sad. Addressing an imaginary pigeon, she persuades it to convey her messages to her husband and sings praises of her husband. Finally one day a pigeon brings the message of her husband’s homecoming.There is jubilant mood all around and celebrations begin. The wife is happy and celebrates like everyone else. All people congratulate the girl and dancing continue until the end of the performance. 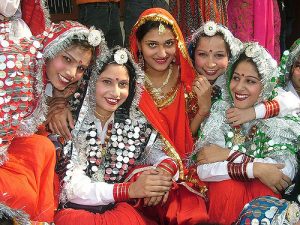 All these emotions are very well articulated through dance. Girls wear the traditional attire of Ghagra, Kurti, Chundri, and Chunda while performing this dance.