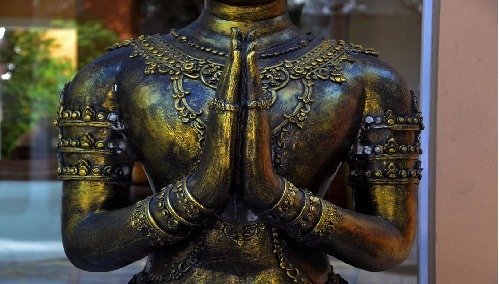 Traditional Bronze Ware, Metalcraft is very old in this state. It is carried in the traditional way using the cire perdue, lost wax method. The temples have an attractive display of this art and it speaks volume of the creativity done by the artists. In the south of India, there is a strong belief that bronze exude the energy of divine and this is the reason why the idols are made of bronze.

Bronze items can be preserved for a longer time when they are maintained and are not breakable. Karnataka produces traditional lamps made out of bell metal and brass. They are available in all possible sizes.

Bidar in Karnataka is a famous for bidriware-a craft done on a metal plate of zinc, copper, tin, and lead. Bidri articles ornamental jugs, bowls, plates pen holders, candlesticks, and even paper knives. Nagamangala near Mysore is famous for its bronze items and Mangalore in the west coast boasts of domestic articles made of bell-metal. 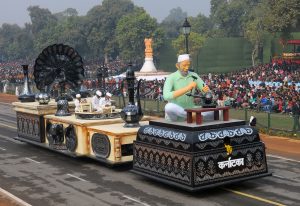 Metal Ware is one craft tradition that engages many families in the state. Metal Ware in Karnataka has a rich and ancient tradition and the objects serve both religious and secular needs. The temple town of Udupi is famous for its small images and ritual objects, while Karkala, an ancient Jain center, is well known for its Jain icons.

Mangalore in the west coast boasts of domestic articles made of bell metal while Nagamangala near Mysore is celebrated as a center for bronze casting. The bronze makers of Nagamangala have for centuries displayed delicate and graceful workmanship especially in delineating, in the most charming manner, the anatomy of the human body.

The marvelous works on metals fascinate those who come to this state. It attracts tourists and thereby earn money for the villagers who carve these extraordinary articles. 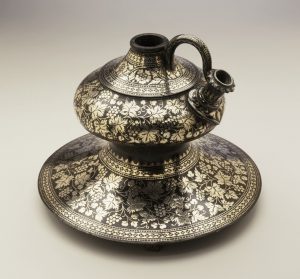 A 1775 water pipe base displayed in Los Angeles County Museum of Art.

The metalware of Karnataka has a rich age-old tradition. They are used for religious as well as secular purposes.

The works of Karnataka metals are seen in the temple town of Udupi. It is known for the small images as well as the ritual objects of metalware.

• Karkala which marks one of the oldest centers of the Jains is famous for the metalware icons.

• Mangalore lying on the west coast of the state presents a wide range of metalware especially in the form of household objects made of bell metal.

• The metalware includes the works of bronze casting, the best collection of which is found in Nagamangala near Mysore. The works here are especially known for the depiction of the anatomy of the human body. 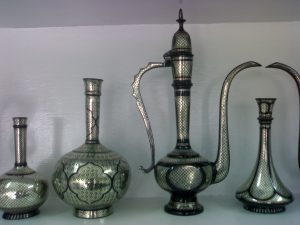