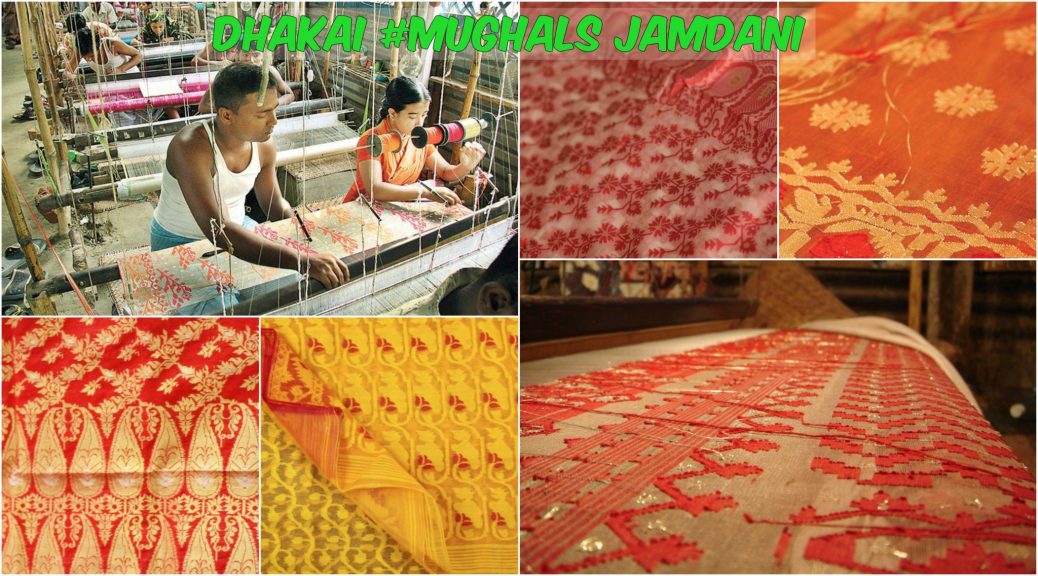 India is a land of various cultures, traditions, and diversities. Food occupies a major part of cultivation and production and one other sector which is also very important on Indian lands is Weaving tradition. Today we shall discuss one such traditional handloom weaving which once got rapidly declined due to British Colonialism because of its policy favor towards industrial textiles manufacturing. Its production was historic and was also patronized by Imperial warrants of the Mughal emperors. It is one of the finest muslin textiles of Bengal region, and since centuries Dhaka district has been into the production of these sarees. It is traditionally named as JAMDANI. 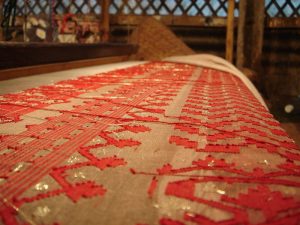 Jamdani originally known as Dhakai, is named after the city Dhaka. Under the Mughal rule, Dhakai is named as Jamdani, as Persian was the court language of Mughals. In Persian language, Jam means Flowers and Dani means a decorative floral vase named after the floral patterns found on Dhakai textile. The traditional art of weaving Jamdani has been declared by UNESCO as an Intangible Cultural Heritage of Humanity. Its origin and industrial development were mentioned earlier in Kautilya’s Arthashastra, a book of economics written around 3rd century B.C stating that this fine cloth is being used in Bangla and Pundra. (Source: Wikipedia) 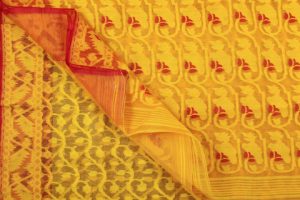 Jamdani, historically referred to as muslin, is a handloom woven fabric made of cotton. It is considered as one of the most time consuming and labor intensive forms of handloom weaving. 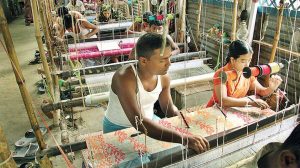 This is a supplementary weft technique of weaving, where the artistic motifs are produced by a non-structural weft, in addition to the standard weft that holds the warp threads together. The standard weft creates a fine, sheer fabric while the supplementary weft with thicker threads adds the intricate patterns to it. Each supplementary weft motif is added separately by hand by interlacing the weft threads into the warp with fine bamboo sticks using individual spools of thread. The result is a myriad of vibrant patterns that appear to float on a shimmering surface. What’s remarkable in this weaving technique is that the pattern is not sketched or outlined on the fabric. Instead, it is drawn on a graph paper and placed underneath the warp.(Source: Wikipedia)

Undoubtedly, being one of the varieties of finest muslin and is also famous for the artistic weaving of the Bangladeshis. It is traditionally woven around Dhaka and is created on the loom brocade. It is also fabulously rich in motifs. Typically weaved in grey and white. Often a mixture of cotton and gold threads were also used. It is the most expensive product of Dhaka looms as it seeks most lengthy and dedicated work. 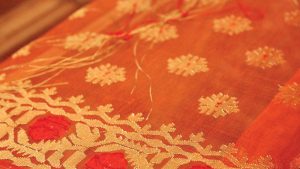 The patterns of Jamdani have originated thousands of years ago and were mostly geometric, floral and plant designs. Due to the exquisite painstaking methodology, only aristocrats and royal families were able to afford such a luxury.