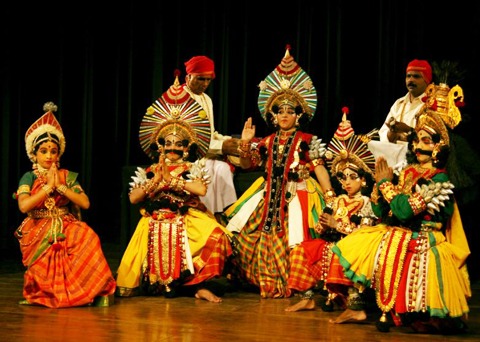 India, a country known for its diverse culture is not only home to various art forms and number of religions, but also to some hidden gold which due to modern technologies has now lost their shine. One such five centuries old charm which comes directly from the southern part of India is Yakshagana. Technically Yakshagana mean songs of the natural spirits but that is for the books to say about this striking dance drama of the south, there is a lot more to know about from its origin. Unfortunately, time bought hundreds to merely dozens of its scripts which were actively performed on in the 21st century.

Yakshagana though strongly related to the Indian state of Karnataka, it has drawn its presence to some surrounding states as well. But most of its plays are written in Kannada (local language of Karnataka) which are primarily inherited from the epics of the deities of Hindu religion. It is to notice that most of its compositions are from the cities of Thanjavur and Madurai (city of poets). 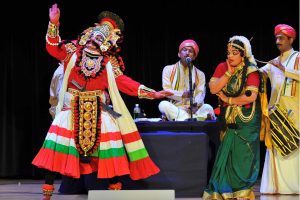 It was only in late 19th century when Yakshagana saw a major change in its divine art, its commercialization. One may observe its relation to the prevalent art form of neighboring states like Kerela, Andhra Pradesh, and Maharashtra but it certainly is most speckled and dynamic than rest of all dance forms. While nowadays it is mainly found in the coastal area of Karnataka, the academics have classified it into several types mainly on the regions they slightly differ in:-

None types or regions change the dignity and the standards of the art form. The instruments, Raga, Tala, ornaments, and costumes are the heart and soul of Yakshagana. It is on the artists and the actors to arrange these gems on them to convey a meaningful and desired message to their audience. For example, red and black getup would signal a demonic creature, on the other hand, pinkish face, a prominent mark on forehead and Yakshagana signature turban would incarnate a heroic character. 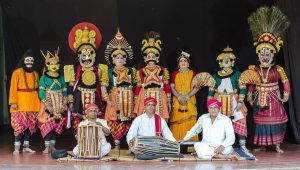 The troupes have played an important role in keeping this theatrical dance drama from diminishing. For this reason, this talent has not only emerged in California (US), Ontario (Canada) but also reached out to people with a difference inaudible language, a voice. A voice which is never to fade but to live for centuries to come and to spread its zeal in this infinite verdure of world.