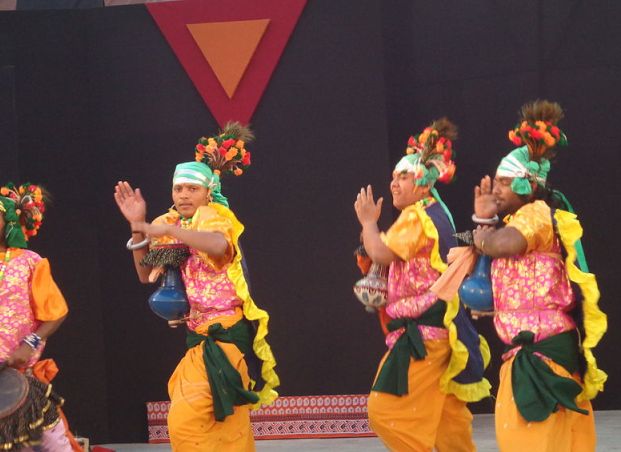 Are you looking for ghumura dance of odisha then check out this post to know more. India is a land where we are continuously reinventing ourselves and learning something new- and playing a supreme part in this novelty is the composite culture and rich heritage that we nurture in our motherland. All states in India have several different cultures- with their own clothing, food habits, songs and unique dancing styles. Today, let us delve deeper into one such dance form, Ghumura, from the state of Odisha in eastern India.

Hailing from the Kalahandi district of Odisha, this folk dance is indigenous to the district and is more tribal than classical in its rhythm, tempo, dance moves and even the costume. 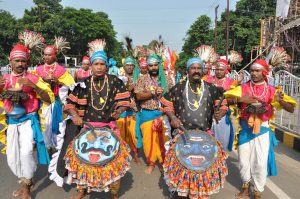 The name of the dance form has been derived from an instrument -the ghumura naat -a particular kind of drum which is played during the dance. It is two feet long hollow earthen pot whose face is covered with the skin of monitor lizard and is tied to the waist of the dancer during the performance.

According to the Chandi Puran of Hindu mythology, goddess Durga had decided that she would defeat the demon king Mahisasur and asked all other gods and goddesses to supply her with all the weapons they could make. The Ghumura naat was such a divine instrument which was made by the union of the Damru of Lord Shiva and the veena of Goddess Sarasvati. As Durga used it to defeat the king of demons, since then the drum has been used by the tribes to signify imminent victory in an upcoming war.

There is clear proof that the dance is quite ancient in origin, by virtue of the paintings found in caves of Kalahandi and Nuapada.

The Ghumura dance is believed to have been first performed in the river valley of Indrāvati and spread to the surrounding areas from there. There are many variations or forms to the Ghumura dance such as Ghumura-Ladhei, Badi-Ghumura, and others. 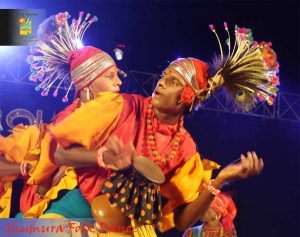 Unlike most indigenous dances which are meant for recreation, this dance was originally performed by the locals during challenging times and periods when a war was imminent as the drum was classified a ‘Veera Vadya’ or instrument of the brave. The dance is performed after the puja of Chitalagi-Amavasya (New Moon) and the music is believed to boost the morale of soldiers and create fear among the enemies of the land. 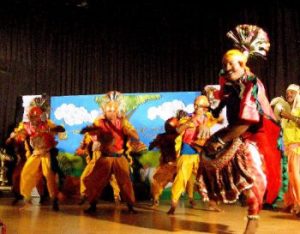 The costumes worn by the Ghumura artists resemble those of the tribal folklore. Ghumura artist wearing silk dress and dhoti, their dress prepared in different types of color. They wear peacock feather and flowers hang on the turban of the performer, he wears ghunguru on his leg, earrings in his ear, and other ornaments to embellish and beautify the costume.

The performances of Ghumura dance are lovely to watch and they really bring a sense of pride in our heritage. However, in modern times, the tribal performers of Ghumura dance are very few in number as most of them have migrated to cities for jobs. The dance is nowadays only performed on special occasions and festivities and has lost its religious significance for the tribes of Kalahandi.