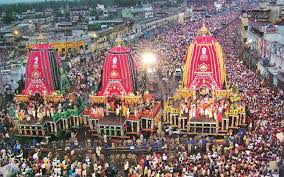 Jagannath Rath Yatra of Puri also well known as the Chariot festival commences on Asadha i.e Rainy Season of Odisha, usually falling in the month of June or July.  It is considered as one of the most awaited festivals of the state as well as the country.

Numerous devotees, artists, and volunteers come forward to put their best effort in construction and decoration of the Three Chariots. Strings of ropes used to pull The Three Chariots are a highlight of this festival.

Subhadra’s Chariot also named as Devadalana comprises of 14 wheels and is of 44.6 feet in height. Bada Danda, the Main street of Puri is the place where Rath Yatra commences when all the three chariots appear one by one. First Lord Krishna’s chariot, then Balabhadra’s followed by Subhadra’s. 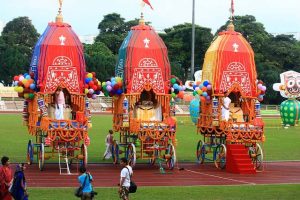 The three chariots are taken to Shri Gundicha Temple their aunt’s house where the deities reside for nine days and are served with sweet pancakes.

The most famous ritual associated with Rath Yatra is Chhera pahara. It is where the Gajapathi King sweeps all around the deities and chariots with a gold-handled broom and then sprinkles sandalwood water and powder both on the first day when the three deities go to their aunt’s house and on the last day when they are ceremoniously brought back to the Puri Temple. The significance of this event is to show that be it a king or a commoner it is the same for Lord Krishna. 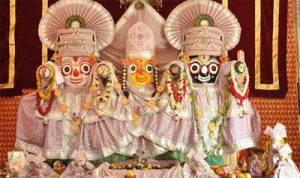 On their way back to the temple from their aunt’s house, the chariots halt at Mausi Maa Temple where the deities are offered Poda Pitha, a sweet baked cake consumed only by poor sections.

The celebration of this famous festival is dated back to the Puranas, and also the descriptions of the festival can be found in Padma Purana, Brahma Purana, Skanda Purana and Kapila Samhita. During Rath Yatra, Puri is flocked with numerous devotees both national and international. With sheer joy and enthusiasm, devotees participate in rath yatra and worship the gods to pay their honor to the deities and seek their divine blessings.