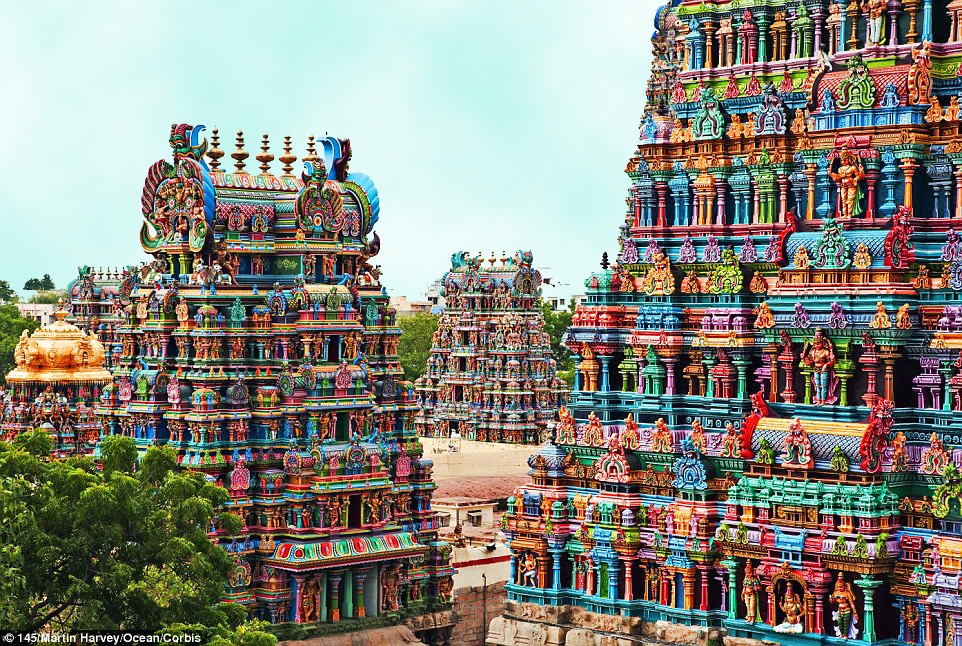 an architectural style that emerged in the Southern part of the Indian subcontinent. India’s ancient temples are architectural marvels that portray the country’s rich past in terms of history, art and culture. Besides being examples of exquisite craftsmanship, the fact that they were built in an era when there was little or no mechanization adds to their mystique.

In South India, the most famous temples are built in the Dravidian style, marked by structures in stone, tall towers, sculptures and intricate inscriptions. They often differ in design and style from one era to the next due to the diverse influences of several ruling dynasties.

From early cave temples that were carved from sandstone hills, the architectural design of South Indian temples slowly evolved to rock cut temples and finally, standalone structural temples that grew larger, both in terms of the area of the complexes as well as the height of the towers or vimanas.

The momentous beauty of Dravidian Architecture is also acknowledged in the ancient book Vastu Shastra and is remarked as one of three styles of temple building.

The majority of the existing structures are located in the Southern Indian states of Andhra Pradesh, Karnataka, Kerala, Tamil Nadu and Telangana but can also be found in parts of North India (Teli ka Mandir Gwalior, Bhitargaon Baitala Deula, Bhubaneshwar), Northeastern and central Sri Lanka.

Throughout Tamilakam, a king was considered to be divine by nature and possessed religious significance. The king was ‘the representative of God on earth’ and lived in a “koyil”, meaning the “residence of God” or a “Temple.”  In the Dravidian-speaking South, the concept of divine kingship led to the assumption of major roles by state and temple.

Mayamata and Manasara shilpa texts estimated to be in circulation by 5th to 7th century AD, is a guidebook on Dravidian style of Vastu Shastra design, construction, sculpture and joinery technique. Isanasivagurudeva paddhati is another text from the 9th century describing the art of building in India in south and central India.

Traditional Dravidian architecture and symbolism are also based on Agamas which have been dated either as post-vedic texts or as pre-vedic compositions. The Agamas are a collection of Tamil and Sanskrit scriptures chiefly constituting the methods of temple construction and creation of murti, worship means of deities, philosophical doctrines, meditative practices, attainment of sixfold desires and four kinds of yoga.

You can find the temples to be of various shapes, they may be rectangular, square, star-shaped, or octagonal.

-These temples usually have Gopuras, which are large towers over the entrances. The Gopuras were in the past always the tallest structures in town.

– The most sacred place is the pitha (altar), or pedestal, of the Deity which is in the inner sanctum called the garbha-griha (womb house). This part of the temple must be constructed first and before construction begins, there is a need to organize a ceremony known as impregnating (garbhadhana or garbha-nyasa).

– The central shrine is topped by a pyramidal tower several stories high called vimana or sikhara. It is crowned by a chakra in a Lord Vishnu temple and a trident in a Lord Siva temple.

– The inner sanctum is surrounded by subsidiary shrines, mandapas (halls), and pillared corridors. Mandapa (mantapa in Kannada) means any roofed, open or enclosed pavilion (hall) resting on pillars, standing independently or connected to the sanctum of the temple. Mandapas are one or more entrance porches or halls that lead to the inner sanctum.

– There is a rectangular hall in front of the sanctum (mukha mandapa) where the devotees stand and view the main deity of the temple.

– Pillared halls (Chaultris or Chawadis) are used for many purposes and are the invariable accompaniments of these temples.

– In the temple yard outside the main entrance of the inner sanctum is the flagpost (dhvaja-stambha) and a platform for food-offerings (bali-pitha).

– These rectangular, pyramidal towers are often 50 meters high with intricate sculptures of gods, demons, humans, and animals on them. They can also be painted very bright colors.

Various kingdoms and empires have made substantial contribution to the evolution of Dravidian architecture.

Also called the Early Chalukyas, ruled from Badami, Karnataka and spawned the Vesara style called Badami Chalukya Architecture. Over 150 temples remain in the Malaprabha basin. The rock-cut temples of Pattadakal, a UNESCO World Heritage Site, Badami, Aihole and Mahakuta are their most celebrated monuments. Two of the famous paintings at Ajanta cave no. 1, “The Temptation of the Buddha” and “The Persian Embassy” are attributed to them.

The Rashtrakutas who ruled the deccan from Manyakheta, Gulbarga district, Karnataka built some of the finest Dravidian monuments at Ellora (the Kailasanatha temple), in the rock cut architectural style. Some other fine monuments are the Jaina Narayana temple at Pattadakal and the Navalinga temples at Kuknur in Karnataka.

The Rashtrakutas contributed much to the culture of the Deccan. The Rashtrakuta contributions to art and architecture are reflected in the splendid rock-cut shrines at Ellora and Elephanta, situated in present-day Maharashtra.

It is said that they altogether constructed 34 rock-cut shrines, but most extensive and sumptuous of them all is the Kailasanatha temple at Ellora. The temple is a splendid achievement of Dravidian art. The walls of the temple have marvellous sculptures from Hindu mythology including Ravana, Shiva and Parvathi while the ceilings have paintings.

The Western Chalukyas also called the Kalyani Chalukyas or Later Chalukyas ruled the deccan from their capital Kalyani in modern Karnataka and further refined the Chalukyan style, called the Western Chalukya architecture. Over 50 temples exist in the Krishna River-Tungabhadra doab in central Karnataka. The Kasi Vishveshvara at Lakkundi, Mallikarjuna at Kuruvatii, Kalleshwara temple at Bagali and Mahadeva at Itagi are the finest examples produced by the Later Chalukya architects.

The reign of Western Chalukya dynasty was an important period in the development of architecture in the deccan. Their architectural developments acted as a conceptual link between the Badami Chalukya Architecture of the 8th century and the Hoysala architecture popularised in the 13th century.

The art of Western Chalukyas is sometimes called the “Gadag style.” Apart from temples they are also well known for ornate stepped wells (Pushkarni) which served as ritual bathing places, many of which are well preserved in Lakkundi. Their stepped well designs were later incorporated by the Hoysalas and the Vijayanagara empire in the coming centuries.

The earliest examples of Pallava constructions are rock-cut temples dating from 610 – 690 CE and structural temples between 690 – 900 CE. The Pallavas greatest constructed accomplishments are the single rock temples in Mahabalipuram and their capital Kanchipuram, now located in Tamil Nadu. There are excavated pillared halls and monolithic shrines known as rathas in Mahabalipuram.

Early temples were mostly dedicated to Shiva. The Kailasanatha temple also called Rajasimha is a fine example of the Pallava style temple. Mention must be made here of the Shore Temple constructed by Narasimhavarman II near Mahabalipuram which is a UNESCO World Heritage Site.

Srivilliputtur Andal Temple, the finest example of Architecture by Pandya, is said to have been built by Periyaazhvar, the father-in-law of the Lord. The primary landmark of Srivilliputtur is 12-tiered tower structure dedicated to the Lord of Srivilliputtur, known as Vatapatrasayee. The tower of this temple rises 192 feet (59 m) high and is the official symbol of the Government of Tamil Nadu. Other significant temples of the Pandyas include the famous Meenakshi temple in Madurai.

The Chola kings included Rajaraja Chola I and his son Rajendra Chola who built various temples that are known worldwide. The Cholas were prolific temple builders right from the times of the first king Vijayalaya Chola after whom the eclectic chain of Vijayalaya Chozhisvaram temple near Narttamalai exists. These are the earliest specimen of Dravidian temples under the Cholas. His son Aditya I built several temples around the Kanchi and Kumbakonam regions.

The Chola period is also remarkable for its sculptures and bronzes all over the world. Among the existing specimens in museums around the world and in the temples of South India may be seen many fine figures of Siva in various forms, such as Vishnu and his consort Lakshmi, and the Siva saints.

Though conforming generally to the iconographic conventions established by long tradition, the sculptors worked with great freedom in the 11th and the 12th centuries to achieve a classic grace and grandeur. The best example of this can be seen in the form of Nataraja the Divine Dancer.

Their architectural style, an offshoot of the Western Chalukya style, shows distinct Dravidian influences. The Hoysala architecture style is described as Karnata Dravida as distinguished from the traditional Dravida, and is considered an independent architectural tradition with many unique features.

The finest examples of their architecture are the Chennakesava Temple in Belur, Hoysaleswara temple in Halebidu, and the Kesava Temple in Somanathapura.

Vijayanagara architecture is a vibrant combination of the Chalukya, Hoysala, Pandya and Chola styles, idioms that prospered in previous centuries. Its legacy of sculpture, architecture and painting influenced the development of the arts long after the empire came to an end. Its stylistic hallmark is the ornate pillared Kalyanamantapa (marriage hall), Vasanthamantapa (open pillared halls) and the Rayagopura (tower).

Artisans used the locally available hard granite because of its durability since the kingdom was under constant threat of invasion. While the empire’s monuments are spread over the whole of Southern India, nothing surpasses the vast open-air theater of monuments at its capital at Vijayanagara, a UNESCO World Heritage Site.

The Cheras, were an ancient Dravidian dynasty of Tamil origin, who ruled parts of the present-day states of Tamil Nadu (Kongu Nadu) and Kerala in India. Together with the Chola and the Pandyas, they formed the three principal warring Iron Age kingdoms of South India, known as Three Crowned Kings of Tamilakam.The Chera style of architecture is only one of its kind in Dravidian architecture. The Thirunelli Temple, the Vadakkunnathan Temples, Kodungallur Bhagavathy Temple and Kandiyur Siva Temple are its examples.