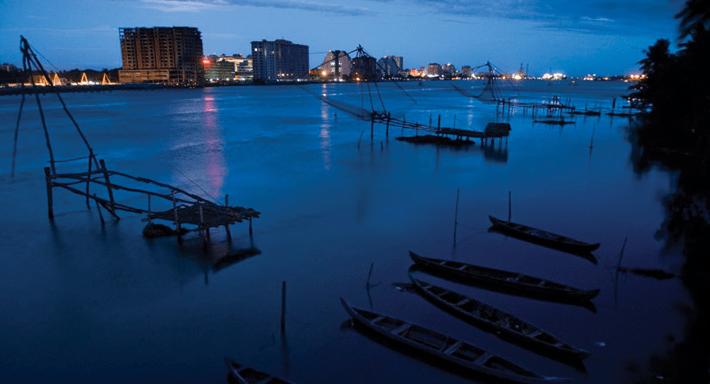 To explore the historic town of Fort Kochi, there is no better choice than setting out on foot. Relax, breathe deep and come out in cotton, soft shoes and yes – a straw hat. At each and every nook of this island steeped in history, there is something amusing awaiting you. It is a world of its own, retaining the specimens of a bygone era and still proud of those days. If you can smell the past, nothing can stop you from walking through these streets.

Walking straight through the K. J. Herschel Road and turning left, you can have a glimpse of Fort Immanuel. This bastion once belonged to the Portuguese and is a symbol of the strategic alliance which existed between the Maharaja of Cochin and the Monarch of Portugal, after whom the fort is named. This fort was built in 1503 and reinforced in 1538. Walking a bit further, you come across the Dutch cemetery. Consecrated in 1724 and managed by the Church of South India, the tomb stones here silently remind visitors of those Europeans who left their homeland to expand their colonial empires.

The next spot to watch is the ancient Thakur House, which stands erect as a concrete specimen of the colonial era. The building is simply graceful. Formerly known as Kunal or Hill Bungalow, it was home to the managers of the National Bank of India during the British rule. Now, it belongs to the Thakur and Company, renowned tea trading firm.

Walk on and there is another colonial structure awaiting you – David Hall. It was built around 1695 by the Dutch East India Company. The hall is associated with Hendrik Adriaan van Reed tot Drakeston, renowned Dutch commander, who is more admired for his monumental book on the flora of Kerala namely Hortus Malabaricus. However, David Hall is named after David Koder, a later occupant of the hall.

Walking past the Parade Ground, the four acres of ground where the Portuguese, the Dutch and the British had once conducted military parades, you reach the St. Francis Church, the oldest European church in India. It has passed through many phases ever since the Portuguese built it in 1503. Now the church is under the Church of South India. By the way, it was in this church that Vasco-da Gama had been buried and his tombstone can still be seen.

The Church Road is a nice place to walk, with the cool breeze from the Arabian Sea caressing your body. Walk down a bit closer to the sea and there is the Cochin Club, home to an impressive library and collection of sporting trophies. Set in a beautifully landscaped park, the club still retains its British ambience.

Walking back to the Church Road, on the left side, you would stumble across another majestic mansion, the Bastion Bungalow. This wonderful structure of Indo-European style had been built in 1667 and is named after its location on the site of the Stromberg Bastion of the old Dutch fort. Now it is the official residence of the Sub Collector.

The Vasco-da Gama square is nearby. A narrow promenade, this is an ideal place to relax a little. Stalls full of delicious seafood and tender coconuts are simply tempting. Savour a bit and feed your eyes on the Chinese fishing nets, being raised and lowered. These nets had been erected here between AD 1350 and 1450 by the traders from the court of Kublai Khan.

Refreshed, you can now proceed to the Pierce Leslie Bungalow, a charming mansion, which once had been the office of Pierce Leslie and Co., coffee merchants of yesteryears. This building reflects Portuguese, Dutch and local influences. Its waterfront verandahs are an added attraction. Turning right, you come to the Old Harbour House, built in 1808 and owned by Carriet Moran and Co, renowned tea brokers. Nearby is the Koder House, the magnificent building constructed by Samuel S. Koder of the Cochin Electric Company in 1808. This structure shows the transition from colonial to Indo-European architecture.

Turn further right and you reach the Princess Street. Mind having some fresh flowers from the shops here. One of the earliest streets of the area, this road has European style residences on both its sides. Located here is the Loafer’s Corner, the traditional hangout for the jovial and fun loving people of Kochi.

Walking northwards from the Loafer’s corner, you come across Santa Cruz Basilica, the historic church built by the Portuguese and elevated to a cathedral by Pope Paul IV in 1558. In 1984, Pope John Paul II declared it as a Basilica. After having a quick look at the Burgher street and the Delta Study, a heritage bungalow built in the year 1808 and now functioning as a high school, you walk down, once again to the Princess Street and then to the Rose Street. There you would find Vasco house, believed to be the residence of Vasco-da Gama. This traditional and typical European house is one of the oldest of Portuguese residences in Kochi.

Turning left, you walk over to the Ridsdale Road to find the VOC gate, the large wooden gate facing the Parade ground. The gate, built in 1740, gets its name from the monogram (VOC) of the Dutch East India Company on it. Close by is the United Club, once one of the four elite clubs of the British in Kochi. Now, it serves as a classroom for the nearby St. Francis Primary School.

Walking straight, you reach the end of the road and there is the Bishop’s house, built in the year of 1506. It had once been the residence of the Portuguese Governor and is set on a small hillock near the Parade Ground. The facade of the house has large Gothic arches and the building was acquired by Dom Jos Gomes Ferreira, the 27th Bishop of the Diocese of Cochin whose jurisdiction extended over Burma, Malaya and Ceylon apart from India.