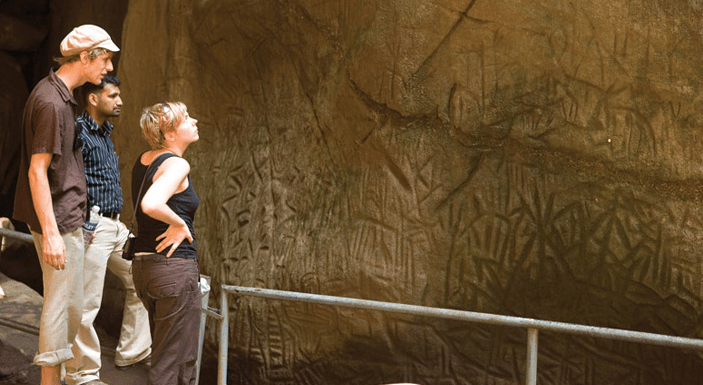 What kind of people were our ancestors? What kind of lives did they lead? Often, the paths leading to the answers to these questions are as fascinating as the answers themselves. If you would like to walk a little way along one such wonderful path of discovery, one good place to visit would be the Edakkal caves in the Ambukuthi Hills in North Kerala, considered to be one of the earliest centres of human habitation. Inside the cave you will find ancient stone scripts, pictorial wall inscriptions of human and animal figures with peculiar headdresses, the swastik form, symbols and cave drawings of human figures, wheels, bows, knives, trees and so on.

Similar cave drawings, considered to be 7000 years old, are found only in Stiriya in the European Alps and a few rocky places in Africa. The caves, which are found around 10 km from Sultan Bathery, are two natural rock formations believed to have been formed by a large split in a huge rock.