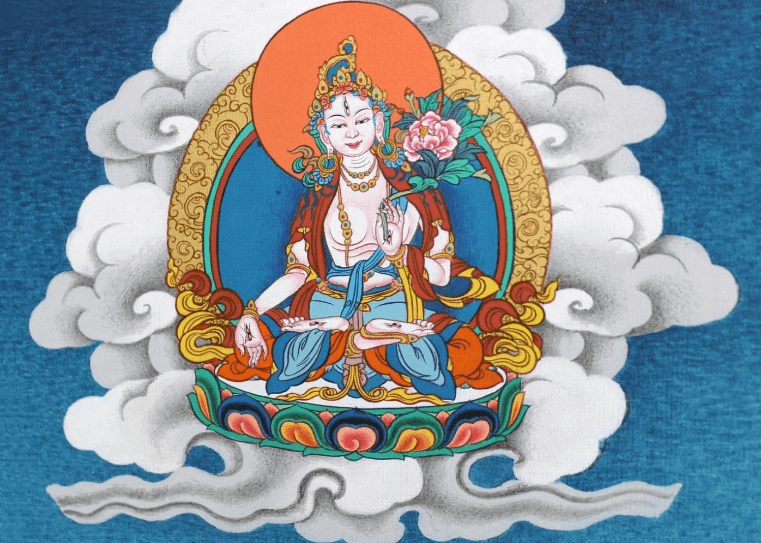 Are you looking for thangka painting then check out this post to know more. A Thangka is a Tibetan scroll-banner painting which is hung in a monastery or a family altar and carried by lamas in ceremonial processions. Thangka is a unique art form that belongs to Tibetan culture. In Tibetan the word ‘than’ means Flat and the suffix ‘ka’ stands for Painting.

The Thangka is thus a kind of painting done on flat surface but which can be rolled up when not required for display. The most common shape of a Thangka is the upright rectangular form. Thangka is a different art in terms of its connection t3o Buddhism. Its roots can be found in the Buddhist scriptures. Thangkas are used by the Tibetan Practitioners to help them develop a close relationship with a meditational deity.

Thangkas assist the mediator in focusing and clearly visualizing particular images. The making of thangka involves many complicated processes and there are certain prerequisites and stringent requirements to adhere to as it are viewed as a religious object for religious purposes.

Tibetan Buddhist painting developed from the traditions of early Buddhist paintings, like paintings in Ajanta Caves in India and the Mogao Caves at Dunhuangon the Silk Road, in Gansu province, China, which have elaborate wall paintings.

The Thangka form developed alongside the tradition of Tibetan Buddhist wall paintings, which are or were mostly in monasteries. The earliest survivals of Tibetan paintings on cloth are in some pieces from the Mogao Caves at Dunhuangin China. Earlier Thangka forms of paintings were made in ancient scriptures and manuscripts and textiles.

Over the following centuries Tibetan paintings, both on walls and Thangka, continued to develop in its distinctive style, balancing between the two major influences of Indo-Nepalese and Chinese painting. Styles vary considerably between the different regions of Tibet as well as the wider region where Thangkas are painted. Within Tibet the regions nearer Nepal and China are often more influenced by those styles.

Bhutanese Thangka was mainly influenced by Central Tibet. The different monastic orders also developed somewhat different stylistic characters. Thangkas were painted in all the areas where Tibetan Buddhism flourished, which include Mongolia, Ladakh, Sikkim, and other parts of Himalayan India in Arunachal Pradesh, Dharamsala, andLahaul and Spiti district in Himachal Pradesh. It is also practiced in parts of Russia (Kalmykia, Buryatia, and Tuva) and Northeast China.

Practitioner Community
Thangka painting is practiced by artists who go through years of training and practice. The art of Thangka Painting is not gender bound, anyone who is willing to dedicate themselves to learning this art can practice thangka. Thangka earlier was seen as a meditation, a means of communication between the artist and the deity.

The person who wants to learn the art of painting a thangka gets empowerment by the lamas, and then under the guidance of the master thangka artist as his guru, learns and practices thangka for years. Athangka artist also needs to have a thorough knowledge of the Tibetan Buddhist scriptures. Thangka has very strict and set rules which are written in the Buddhist scriptures, thus a thorough knowing of the iconography and meanings stated in the scriptures is a must.

A Thangka artist learns to sketch Buddhist symbols and figures of deities for initial few years.
The whole process of perfecting the art of Thangka takes years with the learning process itself taking up to twelve years.

Thangkas are painted whole year round. Though being practiced indoors, the paintings require dry atmosphere. Sunlight is only required during the preparation of canvas for its good and fast drying. Therefore many a time’s several canvases are prepared in advance during good sunlight and dry weather.

In Dharamshala, Thangka painting is practiced by the Tibetan community in exile. Dharamshala is the centre of the Tibetan exile world in India. Following the1959 Tibetan uprising there was an influx of Tibetan refugees who followed the 14th Dalai Lama. Thus, Dharamshala has communities of Tibetans, amongst whom a few try to preserve their culture and art by learning and practicing the min institutes like Norbulingka Institute.

Mineral colors are brought in from different places within India as well as Nepal and Tibet. Cold gold or Ser and Cold silver or ngul dul are brought from Nepal in form of small drops.

Process
The process of making the painting involves three steps; preparation of the canvas, drawing and coloring/painting.

Preparation of Canvas:
1. The canvas is stretched over a wooden frame and the sides are sewn to the frame with a cord that allows tension to be adjusted.

2. Leather glue is heated in water till it melts.

3. This melted glue is mixed with distemper powder and water to form a liquid paste.

4. This paste is applied properly on both sides of the canvas and let to dry in the sunlight.

Drawing:
1. Using pencil, compass and a scale, geometric markings are made on the backside of the canvas to define points for the drawing on the front side.

2. It requires perfect skills in drawing, perfect figures and great understanding of the econometric principles to make this paintings. Balanced grid of angles and intersecting lines are used to portray arms, legs, eyes, nostrils, ears, and various ritual implements, thus for paintings these geometrically balanced drawings are first made on different paper and through tracing paper it is transferred to the prepared canvas.

3. Once the initial sketch is over, the design is redrawn and details refined with ink.

Coloring/painting:
1. Mineral color powder is den mixed with glue binder to form a paste of required consistency.
2. The drawing is then colored. First the distant areas are colored like sky and background, and then the main figure is colored. The completed painting is taken to only the tailors who mount the work on silk brocade to complete the scroll painting of Tibetan Thangka.

Themes, Motifs and Iconography
Thangka painting follows old iconographic patterns that are defined in detail in old Tibetan Buddhist scriptures. A Thangka is made according to strict rules of Tibetan Buddhist iconography with rare attempts of modification in the figure drawing. Artistic freedom of a Thangka artist is however limited to background landscape and slight color variations.

The main themes of a Thangka Paintings are:
Mandalas

A mandala Thangka follows a cosmic, geometric pattern of circles, geometric pattern of squares and circles. The outer square form has four gates. These four doors symbolize the bringing together of the four boundless thoughts namely -loving kindness, compassion, sympathy, and equanimity. It is considered to represent the abode of the deity. At the center of the mandala lies the deity, with whom the mandala is identified. It is the power of this deity that the mandala is said to be invested with. The mandala is “a support for the meditating person”.

Buddha’s Life
Thangkas depicting Buddha’s life are simple and present the story of Buddha Sakyamuni from the time his mother saw a white elephant in her dream before conceiving him, to Buddha attaining nirvana.

Wheel of life
The Wheel of life or the wheel of existence or Bhavachakra is a frequently seen theme of Tibetan Thangka. A dreadful monster or Yama holds a wheel in his claws. The wheel has a number of small circles and is divided into 6 different realms.

Sometimes different colored canvases are used to paint the thangkas. In these thangkas figures are not colored much; the paintings are mostly outlines with not much color and often with gold or silver highlights. A particular color canvas is associated with a particular deity.

There are six styles in Thangka paintings and each style has its own significance:
•Minti style: More importance is given to the use of blue and green colors.
•Chanti style: Light colors or pastel colors are used more.
•Kamgatti style: Sketch based painting
•China getti style: Painting through cosmic design
•Gotti style: Floral designs are made without making the outline floral
•Khamtti style: Paintings are made using the place name as base

It depends on the artist that which style he practices, in which style the painting would be made.

The mantra is written right behind the body of the deity:
OM being behind the forehead
AH at the throat
HUM at the chest

Products
Thangka scrolls still remain the most popular product being made with this technique. However there are a few variations available in the market like painted furniture. One can find wall paintings in Buddhist temples, which are closely associated with the art thangka painting since time immemorial.

As mentioned earlier, thangka paintings are done with strict set of rules which are predefined, thus there is a very less scope of experimentation and innovation. One aspect which differentiates thangka from other crafts and art practices is that thangkas were not for aesthetic or daily utilitarian purposes, thangkas instead are an aid for meditation or a symbol of good karma.

This is why a large amount of thangkas being made are still commissioned. In past, commissioning of thangka would build a spiritual relation between the person who has commissioned a thangka, the artist, the lama (under whose guidance the artist works) and the deity.

The contents of the thangka are according to the customers’ demand. One small but quite notable change that has occurred is that a few thangka paintings now are not being mounted on the silk brocade cloth, instead are framed with wood and glass. Such thangkas are for commercial purposes.

Thangka Appliqué or Dras-drub-ma
Another kind of Thangka is in the form of appliqué work. Appliqué thangka is a scroll-like installation on which Buddhist imagery is constructed by stitching colored pieces of fabric onto a base cloth. Various parts of the image are produced separately by cutting and sealing their ends and then are finally attached onto a single cloth to form a whole figure.

The parts maybe overlapped and arranged so there is an addition of a different degree of dimension in the thangka. The details are made on these cloth pieces by embroidery which gives the whole image a definition. The threads for embroidery are made with a hair of horse’s tail coiled with silk thread.

Innovations
Innovations and changes in thangka painting have been made only in terms of tools and materials and otherwise the practice and process is same as it was years back. Along with pigment colors, acrylic colors and poster colors are also used. With the help of blow dryers and room heaters, ideal situations are created during unlikely weather for paintings to be painted efficiently. This helps the artist to paint thangkas all year round.

Challenges
Thangka paintings have admirers all over the world, be it for its aesthetic beauty or for spiritual purposes. A lot of thangkas are being commissioned from all over the world, and several are bought through various online portals which sell authentic paintings.

Because thangka paintings have large amount of admirers, there are printed versions of thangkas available in the market which are bought by people all over the world. These thangkas lack authenticity. Also a lot people are aware about the existence of the art but not well aware about its making process like many other arts and crafts. Thus, the tremendous effort going into making of thangkas get unnoticed.

Thangkas are not being portrayed as a commercial art, and that is where its beauty lies in, the relationship between a thangka and its painter is deep and spiritual. The story of thangka paintings need to be told and thus, awareness is the important challenge that thangka art is facing.