All About Amazing Tussar Weaving Of Bihar in 2021 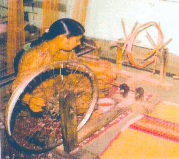 SILK -also known as the queen of textile, luxury, elegance, class, and comfort. The silkworm that spins a protective cocoon around itself as shelter while it changes from a caterpillar into a moth produces this high value animal fiber. The cocoon is the source of commercial silk.

Silk fiber has qualities like natural sheen, inherent affinity for dyes, high absorbency, lightweight and excellent drape. Chemically, silk is made of protein secreted in fluid state by the silkworm. There are four main different varieties of silkworms:

(c)Muga silk -This golden colored silk is obtained from silkworms that feed on the aromatic leaves of Som and Soalu plants.

(d)Tussar silk –Copperish in color, this is coarse silk generated by the silkworm Antheraeamylitta, that thrives on the plants Asan and Arjun. The rearing of this silkworm is conducted on trees in the open, so this is also known as wild silk.

The origin of the craft is not known but it was observed after the 16th century when the first European merchants came to India and surveyed the craft. Four varieties of tussar fabric were mentioned; these were mainly cotton-mixed fabrics. The weaves and colors were very simple at that time.

In Indian tradition, saris of silk are considered very pure, especially saris made up of reeled cocoon, which has not been spun. Another type of fabric known as Mukta, is popular among the Jain community. Here the moth has cut through the cocoon and escaped, leaving the silk filaments as a mass of short fiber, which has to be spun.

TUSSAR PRODUCTION IN BHAGALPUR
Bihar produces about 66% of Indian tussar, although much of it is woven in West Bengal and Orissa. The east Bihar town of Bhagalpur is famous for its tussar handlooms.

PRODUCER COMMUNITIES
The craft is not related with any specific caste. The craftsmen involved in this craft come from different communities: Muslim, Scheduled castes and some tribes. This craft is the major source of income for the families of nearby villages. Both women and men are involved in tussar silk production.

For weaving both spun and reeled thread is used. In tussar fabric, both warp and weft are silk threads. The spun thread is only spun by hand. The other raw materials required for tussar are the dyes, and the mordants used to fasten the dye color.

The dyes used in tussar are both chemical (Azoic) and vegetable dyes. Because of some carcinogenic effects, azoic dyes are now avoided for the export market, though they are still in use.

Various dyestuffs are used like for vegetable dyeing.
The commonly used dyes for different colors are:

The mordants used in natural dyes are Alum, Kasis, Tin, Iron, etc. according to the required shade of color.

TOOLS USED IN THE PROCESS

Various tools used in the process are listed below:

4. Hydro-extractor -Used to dry out the dyed silk skeins
5. Kundi -A wooden hammer which is used to beat the cloth, to set the weave.

6. Scissors -To finish the woven fabric
7. Spray machine -To sprinkle water on the fabric before calendering
8. Calendering machine -For the mechanical pressing of the fabric.

The process of tussar weaving has the following steps

(a)Designing: The master craftsmen select the drawings. The design is mainly variations of weave and color.
(b) Raw material preparation: This is a long process that can also be divided into certain steps:

Cocoons are firstly sorted and then the good ones are boiled in water with some amount of soda for 1/2 to 2 hours. For 1280 cocoons, 300gms of soda is used. In this process, the vessel is pressed with a heavy lid, so that the cocoons do not come out.

After boiling, the silk strands are unwounded onto bamboo spools. Workers use their bare thighs to draw out a single filament of silk from the cocoons. This silk is known as ghicca silk. In khewa silk, the hands are used to unwind the silk filament.

Throwing: After this process the spools are transferred to skeins. After drying, these skeins are reeled on bobbins to make a thicker, stronger, and multi threaded yarn. Around 10 skeins are twisted together.

Dyeing: Natural dyes are commonly used for dyeing tussar silk. While the process of dyeing is similar for all colors, mordants are used differently for specific colors.

In general, the first step for all dyes is extraction by boiling the dyestuff in water. The solution is strained, and the dye is applied to wet yarn skeins. After some ti me the s keins are put in mordant solution to fasten the effect of the dye.

The last step is to wash the yarn with reetha powder. For black color harer powder is boiled in water for 15-20 minutes. The wet skeins are put in a dye bath for 20 minutes in a separate container. Kasis stone is used as the mordant. It is put in plain water and sieved.

Preparation of Weaving
-In the weaving operation, lengthwise yarns that run from the back to the front of the loom make the basic structure of the fabric and are called the warp. The crosswise yarn is the filling, also known as weft.

Weaving process
In the weaving process on the loom, the warp beam is mounted at the back and the warp yarns are conveyed to a cylinder called the cloth roll, which is at the front of the loom.

Supported on the loom frame between the two cylinders, the warp yarns are ready to be interlaced by the filling or weft yarns, to produce the woven fabric. In the weaving process four steps are fundamental.

•Shedding: The operation performed by the harnesses -rectangular frames to which a series of wires, or heddle, are attached. As each warp yarn comes from the beam, it must pass through an opening in the heddle.

•Drawing in: The operation of drawing each warp yarn through its appropriate heddle eye. In the weaving process the heddle frame raises or lowers certain groups of alternate warp yarn by treadles, so that the filling yarns alternate in passing under one group of warp yarns and over another.

•Picking: As the harnesses raise the heddles, which in turn raise the warp yarn, the filling yarn is inserted through the shed by the shuttle that contains a bobbin of filling yarn. This crossing of wefts between the shed of the warp is known as Picking.

Each warp yarn passes through a heddle eyelet and through an opening in another frame that resembles a comb and is called the Reed. With each picking operation, the filling yarn is pushed against the woven fabric. This process is known as Beating.

•With each shedding, picking and beating, the newly constructed fabric must be wound on the cloth beam. This is referred to as taking off.

FINISHING
After the fabric is taken off the loom, it is washed with plain water and spread for drying. After drying, water is sprinkled with a spray machine. This spraying should be uniform all over the surface. Then the fabric is folded properly and beaten with a heavy hammer, called kundi.

This beating process sets the weave properly. The fabric is now ready for calendaring. This is a mechanically produced finish, achieved by pressing the fabric between a series of two or more rollers to smoothen it and produce wrinkle free effect.

PACKAGING
For the export market the products are packed in natural-dyed cotton bags, with the brand name printed on.

MARKETING
Tussar silk has a good demand in the foreign market, but is not as popular in India. Because of its warmness and roughness, it is appreciated in cold countries. The major source of marketing of tussar from Bhagalpur is craft exhibitions and exporters.

because of its good export demand, the craftsmen are positive towards the use of natural dyes, variations in design and products and child labor free production.