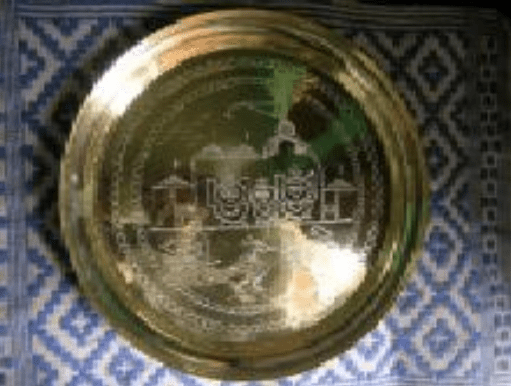 Puri, is located 65kms from Bhubaneswar which is the capital of Orissa. Puri is famous for its Jagannath temple and
Sea beach.

India is the largest brass making region in the world with thousands of establishments spread all over.

Producer Communities
Shri Bishnu Charan Sahoo is a metalsmith; Patara by caste. Other tribes living in that region are Thateras locally known as Kansari, Gurrai, Teli and Patnaika. They are all people who are engaged in some or the other craft like stone carving, metal engraving, metal embossing, Kalamkari, wood carving, etc. They do not practice any other occupation as they are practicing their traditional crafts.

Craft Tradition
Before paper was discovered, brass and other metals were used for writing on, keeping accounts for the kings. This text was maintained as a permanent document by the king and later this technique was developed by the craftsmen as a medium of expression where they can show their skill by means of engraving.

Brass is a mixture of two or more metals. Brass has been in use since primitive man discovered copper and other metals. Brass has an equal importance in Indian mythology as well as in the Vedas and epics. Till now it bears the same importance, Brass is also used nowadays for making statues of gods and goddesses, household and cooking utensils and decorative items.

The raw materials used for this craft are plates, dishes made out of brass rolling sheets of 35 Gauge. Other utensils like bowls and big vessels made by beating are also engraved. The sheets (rolling machine sheets) are bought by the craftsman from outside Orissa as they are not available within Orissa. They are bought from Jagadhari, Haryana and some parts of Uttar Pradesh. The estimated rate of these sheets is Rs. 60 per kilogram for 35 gauges. The rate of the sheet goes up as the gauge of the sheet reduces. The sheets are mostly bought by weight and not by the size. The most commonly used sheets are of 35 gauges and 22 gauges. Eighteen and 14 gauge sheets are used rarely, depending upon the order placed. The sheets are then made into the required sizes of plates and dishes by other industries (prices as per October 2004).

Lac is used while embossing. It is heated in an aluminum tray on a gas stove and the engraved metal plate is pressed over the heated lac. This process makes the area inside the engraving rise, which gives the effect of embossing. The lac can be reheated and reused for the same process.

Tools
Hammer and Wooden Mallet
These are iron tools and are used for engraving, they are used while embossing as well.

Bindhani
This is a pointed tool made out of iron which is used for engraving small dots.

Polani
Polani is the word used in the local dialect for punch. This is an iron tool with a circular head used in engraving.

Cheni /Chisel
This is made of iron and is flat and sharp-edged for making lines in the process of engraving.

Dyes/Punches
They are of different sizes and shapes, used for giving various shapes while engraving. Geometrical shapes like circle, square and rhombus are few shapes of these punches.

Shaam Daam
This is a heavy iron tool used as a base or supporter for the metal plate while hammering.

Engraving
Engraving is done on brass plates, dishes, trays made out of rolling brass sheets. The brass sheets used are of 35 gauges or 32 gauges. For engraving tools likebindini, polani, varios kinds of punches and sometimes chilai or chiseling tools are used.

•The process starts with engraving a central line on the piece which is to be engraved. This gives an idea to the craftsman about the directions of his engravings.

•Then the borders are engraved using punches of various shapes and sizes. Here, the tool is hit with a small hammer once, which leaves the impression of the punch, and in this way a single motif converts into a border.

•After the border is completed the central design has to be engraved. It is usually based on Lord Jagannath or other mythological figures.

Bindhani
A pointed iron tool used to engrave the outline of the figure in the form of small dots following one another, forming one figure.

Polani
A small iron tool with a circular head which, once hit with a hammer, gives an impression of a small circle. It can be used for creating outlines also but usually it is used to fill backgrounds and make eyes of figures or floral patterns.

Cheni or chilai
A small-headed chisel is used in the end. This is used to fill in the head of the figure or draft its clothes.

Embossing
For embossing a thick brass sheet of 32 gauges is used here. There are lots of ways to emboss but the most commonly followed is the one involving lac.

•The motifs are primarily engraved on the brass plate using the same tools used for engraving.
•Firstly, an aluminum tray filled with lac is heated on a gas stove till the lac comes to a semi-molten form.

•Then the brass sheet or plate which is to be embossed is heated on the gas stove so that it can be bent easily. The brass sheet is then placed on the molten lac and is pressed on it with the help of tongs.

•The sheet is then beaten on the lac with a wooden mallet so as to emboss the area enclosed by the engraving.

Kalamkari is a way of expressing one’s imagination on a brass sheet. Here, the brass sheet used is of 14-18 gauges because the metal is scooped out to make lines or designs. A kalamand a cheniare used for Kalamkari.

•Firstly, the motifs are drawn on the sheet of brass with a pencil.

•Then the borders are created, if any, which take a very longtime to do. A kalam which is a sharp pointed iron tool is used for carving a line on the roughly drawn line. Then slowly and gradually all the outlines are created, after which the detailing is done.

•Thereafter, for filling the bigger areas, the cheni is used. After creating the borders, the main motifs are worked out.

Products and Their Uses
Brass metal engraving consists of products which are mainly used as decorative pieces, as souvenirs and during worship. They are: