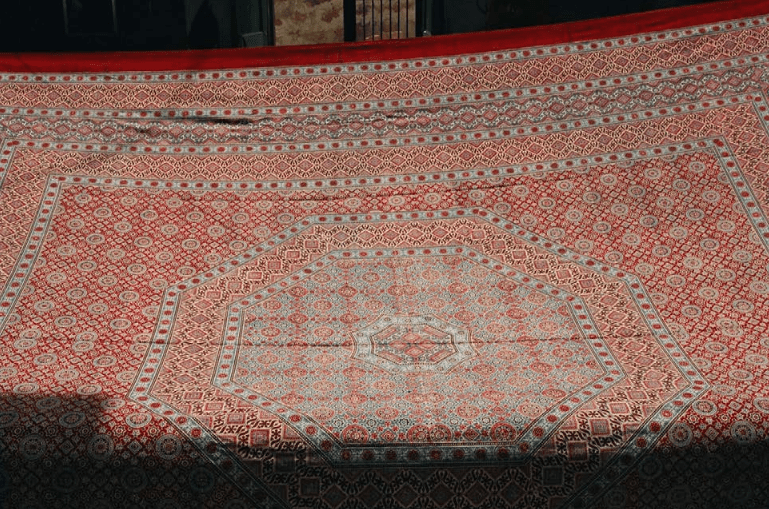 art of Ajrakh Printing is awesome. An art and a tradition, the cloth of the inhabitants of Sindh is called ‘Ajrak’-aptly described by Noor Jehan Bilgrami.

Sindh is the birthplace of Ajrak,. Ajrak has existed in Sindh since the Mohenjodaro civilization, or even before that. The true origin of the word ‘Ajrak’ is unknown.

In Arabic, it means blue or indigo. Sindh was traditionally a large producer of indigo and cotton and exported both to the Middle East.

The color blue is also used extensively in Ajrak. It is not known whether the word came from Arabic and was incorporated into Sindhi or vice versa.

Men use it as a turban, a cummerbund and also wind it around their shoulders. Women use it as a dupatta, a chaddar or as a shawl. The cloth used is usually about 2.5-3 meters long. It is patterned with intense jewel-like colors. The dominant colors are a rich crimson and a deep indigo.

A little bit of white and black is also used to give definition to the geometric patterns. The geometrical designs in the fabric seem to echo the principles of Sufism (Islamic spiritualism) which was widely followed in Sindh.

The geometric patterns which use the concept of symmetry are symbolic of cosmic processes that extend in all directions.

After the partition of India the production of Ajrak was carried out in Kutch, Rajasthan and Gujarat which were once the easternmost portions of Sindh.

The names and patterns are fairly similar to those found in Sindh. There are no indications of different traditions developing in terms of patterns used, as the influence of the Sindhi culture is still very strong in Gujarat and parts of Rajasthan.

In Kutch, Ajrak is most commonly associated with specific Muslim ethnic groups such as the Ahirs, Jats and Mutuvas. Here, the craftsmen who make Ajrak are called Khatri.

Fabric
Ajrak colors are best represented on cotton fabric. Earlier only cotton was used for Ajrak printing, but these days silk is also being used. However, on silk the colors do not come out very rich.
Dyes
In the olden days only natural and vegetable dyes were used for Ajrak. These have now been substituted with chemical dyes.

Red color: This color comes from alum, molasses, wheat flour and fennel. The areas to be dyed red are printed and while still wet are dusted with ground cow dung or rice husk to protect against the indigo dye which is used later. This mixture gives the Ajrak red.

The blocks are soaked in mustard oil when not in use so that they do not expand in the rainy season. A set of blocks (three to four blocks with one pattern) costs between Rs.1800 –2500 depending upon the intricacy of the pattern.

Dyes
The traditional Ajrak colors are red, black and indigo. These days yellow, orange and rust are also being used for a more contemporary look.

The process by which Ajrak is created is considered intuitive to the Ajrak makers. It is not merely a job for the craftsperson but a form of life.

The authentic Ajrak is printed on both sides by a method known as resist printing. This form of printing is done by hand with hand-carved wooden blocks. Several different blocks are used to give the characteristic repeated patterning.

The block maker uses a compass and a ruler for precision while making the graphs for the patterns, as their balance has to be perfect.

Block making, which is a family craft that has been passed down from generation to generation, is a considerable challenge as the pattern has to fit perfectly with the whole of the Ajrak as well as cover various areas against dye.The block makers are usually contacted in Farukabad.

1. The basic material is gray or unbleached cotton fabric.
2. To prepare it for printing and dyeing, the cloth goes through various processes: soaking, washing and treatment with stem, sodium bicarbonate, castor oil, eruca sativa oil, camel dung and tamarisk or myrobalan.

3.The fabric is soaked in water which has camel dung immersed in it to make the fabric soft. This also acts as a bleaching agent as it is an alkaline and helps in the printing of the fabric.

4.The first stage of printing includes mud resist which consists of natural gum, lime and Fullers earth and this produces a white outline on the finished fabric.

Next, a navy blue outline of mordant is printed which is made from iron scraps, ferrous sulfate and millet flour. When developed in alizerine this produces black color.

5. Next, a navy blue outline of mordant is printed which is made from iron scraps, ferrous sulfate and millet flour. When developed in alizerine this produces black color.

6.The same mordant as mentioned above is now used to print the filler.
7. A second resist treatment is printed on to protect the white fabric from the subsequent indigo dyeing.
8. A third resist of gum and Fullers earth is then applied, mixed along with an alum mordant. This resist blocks penetration by indigo while the alum when treated with alizerine produces the Ajrak red.
9. The printed fabric is dipped in the vat containing indigo to dye the unresisted areas. A copper vessel is used for this process as copper does not leave its own color.

10.Thorough washing removes the excess indigo and degums the fabric.
11. Boiling the fabric in an alizerine solution develops the red and black mordants. After the cloth has been washed and dried, the desired areas are coated with a resist made of gum, lime and Fullers earth to prevent indigo dye penetration.
12. The final wash removes any excess dye and the resist from the fabric surface.

When worn and washed, the colors become more brilliant and luminous.

There are 22 processes in Ajrak printing which are very tedious and time-consuming, and very few crafts people go through all the stages.

There are variations on the basic theme (teli Ajrak) which make a number of different types of Ajrak (including sabuni ajrak, do rangi ajrak and kori ajrak).

Ornamentation or meenakari, which takes another three to four steps, is done later on to decorate the fabric further.

Ornamentation or meenakari,which takes another three to four steps, is done later on to decorate the fabric further.

Earlier Ajrak was sold in the local market, wherever it was being manufactured. It is mostly used during weddings and given as a gift to elders as it is considered auspicious and is also a sign of respect. Nowadays Ajrak is also being sold in the urban markets.

Ajrak block prints are being used as bed sheets, cushion covers and for soft furnishings. It is used as yardage for garments, salwar kurtas, skirts, dupattas and stoles.

In the international market it is being sold through big exporters, so the local printer or manufacturer does not gain much out of it. Some Japanese buyers have been sourcing directly from the printers but the percentage of quantities they source is negligible.

The cost of the blocks is high in relation to the margins of the Ajrak, making new investment in blocks difficult. No credit facilities are available to the craftsmen. As a result, the younger generations are being weaned away from the traditional source of livelihood.

Changes in the Recent Years

Today, with chemicals replacing the natural vegetable dyes and the printing process being mechanized as modern, quicker methods of copying the original patterns are fulfilling local requirement, the original Ajrak is disappearing and this craft is on the decline.