Nine Different Colours to Wear For Navratri This Year 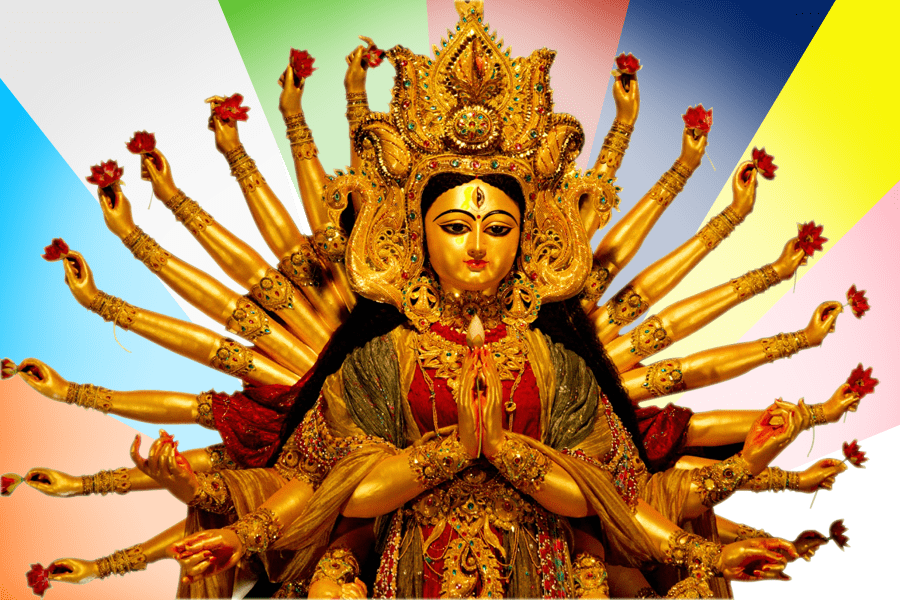 Navratri is a very popular festival celebrated all over India with much enthusiasm and excitement. It is a Hindu festival devoted to Goddess Durga who is a symbol of power and purity. Navratri means nine nights and on these nine nights and ten days, the nine forms of the Goddess or Devi are worshipped. However, most importantly three forms of Devi – Durga, Lakshmi, and Saraswati – are invoked. The festival is celebrated during Sharad – the beginning of winter. The nine-day festival culminated with Dussehra or Vijaydashmi on the tenth day.

During Navratri, there is also a custom of wearing different coloured clothes on the nine days of navratri. Women adorn themselves with dresses and accessories in the specific colour for the day. Women wear the same coloured sarees, salwars kurtas, Chaniya cholis, etc during the Navratri days. This kind of a coloured custom is generally seen in parts of Gujarat and Maharashtra. From the dresses to jewellery to the footwear to even the dandiya sticks are matched to the colour of the day.

The first colour to be worn during Navratri is determined based on the weekday when Navratri starts and the rest of the eight days follow a fixed cycle of colours. The nine colours for navratri 2015 are

First day of Navratri is called as ‘Ghatasthapana’. On this day Goddess Shailaputri is worshiped and the colour to be worn is red.

Second day of Navratri is called Dwitiya and on this day ‘Goddess Brahmachari’ is worshiped and the colour devotees should wear is Royal Blue.

On the fourth day, ‘Goddess Kushmanda- the creator of the universe’ is worshipped. Green represents the colour of this day.

On the fifth day of Navaratri, ‘Goddess Skandamata’ is worshipped. The colour for the fourth day is Gray

Goddess Durga’s sixth incarnation, ‘Goddess Katyayani’ is worshiped on the sixth day of Navratri and the devotees can wear Orange colour attire on that day.

Goddess Kaalratri is the seventh incarnation of Goddess Durga, and is worshipped on the seventh day of Navrartri. White is the colour that denotes the significance of this day.

Goddess Maha Gauri is worshipped on the eighth day of Navratri and she represents kindness, forgiveness, and morality. Pink is the colour for this eighth day.

On the last day of Navratri, the Goddess of supernatural power ‘Devi Siddhidatri’ is worshipped. On this day, sky blue colour is considered auspicious.